Director George Mount leaves no theatrical stone left unturned in his search for innovative ways to stage his rollicking take on Richard Brinsley Sheridan’s The Rivals. Even before the audience has settled into their seats, on stage, a hurried and hushed discussion takes place between two actors most notably upset. Suddenly they whisk away what appears to be an audience member engrossed in her program while making her way to her seat. She is unceremoniously handed a script and shoved backstage. The show must go on and we all need to do our part! Let the madness begin!

When performing a work of Shakespeare such as Romeo and Juliet, it is essential to not only stay true to the play’s original intent, but also remain unique among thousands of other adaptations. Luckily, Wooden O’s recent production of the tragedy stuck out as a great option for both newcomers and experienced viewers of Shakespearean theatre.

The cast of As You Like It. Photo by John Ulman.
Past

Seattle Shakespeare’s final show of their 2019 indoor season, “As You Like It,” opened at Center Theater last Friday to no shortage of laughs. Kelly Kitchens’ directs this very hipster-esque version of the Bard’s comedy. Despite the enduring popularity of Shakespeare’s works, there’s always a degree of difficulty in adapting his four hundred year old […] 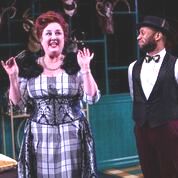 Once again, Seattle Shakespeare Company has creatively updated a classic play and produced a masterpiece. She Stoops to Conquer, one of the 18th Century’s perennial favorites, written by Oliver Goldsmith, was superbly directed by Mikaela Pollock. Emphasizing the essence of the play, comedy and not, because of its age, the museum quality, (needing to be treated with solemn reverence) Ms. Pollock added many brilliant touches: the set, the music, the costumes and especially the topical asides, which both honored the text and animated it.

Michael Winters and Keiko Green. Photo by John Elman
Past

Seattle Shakespeare is on an impressive roll: their productions now consistently feature some of the most outstanding acting found anywhere in the Northwest. A highly skilled cast is a necessity when it must handle Shakespeare’s prickly All’s Well That Ends Well. The rarely produced show is labeled a “problem play” because it features a naturalistic context in which social issues are debated. Yet Shakespeare insisted on grafting onto this framework a number of comedic elements borrowed from the ancient Italian Commedia dell’arte, as he includes stock characters and some absurd “bed play.” That the play’s hodgepodge of elements blend into a wonderful entertainment is all due to a marvelously adept cast deftly handled by director Victor Pappas.

Sarah Harlett and Suzanne Bouchard Photo by HMMM Productions
Past

Remarkably, this gem of a show was not supposed to happen. The Seattle Shakespeare Company had no plans for a Richard III after they had completed reimagining the Bard’s Henry VI trilogy in last year’s Bring Down the House. Yet, the overwhelming momentum engendered by the strength of that production, in particular the outstanding work of Sarah Harlett as young Richard, convinced Artistic Director George Mount and the upstart crow collective to create a sequel. Lucky Seattle! This powerful Richard III is a major highlight for our fall theater season.

Successfully handling Shakespeare’s Merchant of Venice and its complex villain Shylock is one of the more daunting tasks in modern theater. The Bard’s intricate web work portraying bitter business machinations, the nature of antisemitism, pursuits of true love and conflicts between mercy and justice provide enough content for a half a dozen plots. A successful staging of Merchant must touch upon all of these facets and somehow link them into a coherent evening of theater. Prize winning director Desdemona Chiang and an outstanding cast more than meet this challenge in their stunning production at Seattle Shakespeare. 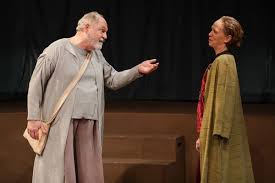 Michael Winters as Apemantus and Mary Ewald as Timon.
Past

Timon of Athens is one of Shakespeare’s least performed plays. As far as we know, it was never presented during his lifetime. The work is remarkably hard to pigeonhole for it is part satire, part morality play and part tragedy (often echoing moments in King Lear). Seattle Shakespeare and director John Kazanjian smartly tackle this […]