“The children now love luxury; they have bad manners, contempt for authority; they show disrespect for elders and love chatter in place of exercise.” Socrates (469 -399 BC)

What is usually called the older generation, always says a variant of the above quote about every younger generation. For the baby boomer generation, we had Christopher Lasch’s punditry. It seems today, we are actually a little bit more enlightened by science about the plight of youth; given the advances in brain science. Physiologically , the most sophisticated part of the human brain, the frontal lobe, where judgment is processed, does not fully develop until age 26, so that is why youth behaves irresponsibly, without reflection and sometimes highly immorally.

And in my experience, it is always the people who were the most irresponsible and most self-destructive in their youth, who are in turn the most judgmental of the growing pains of the under 30’s. The play Really, Really, by Paul Down Coliazzo, produced by Touch Productions, currently running at West of Lenin, was a treatise about the biggest defect of being young, their selfishness. 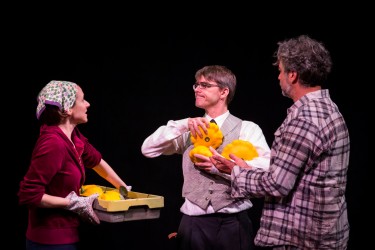 A world premiere by Nick Stokes, Duels, a play billed as being “made up of a heady mix of Beckett, magic realism and a tragic love story” opened at 12th Ave Arts this weekend. Although I would agree with some of that statement, I disagree with the adjectives used, as it was not “heady”, nor did the love story strike me as particularly tragic. Instead it was a poor script with a lot of pretentious touches, whose director, José Amador, did not seem capable of damage control, as the production did not showcase the considerable talent of two of the most accomplished actors in town: Carter Rodriquez and Marianna de Fazio. 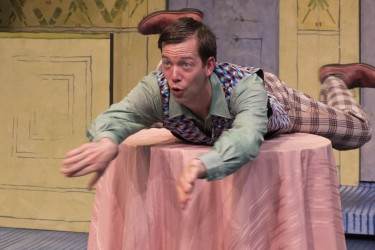 Richard Bean’s 2011 adaptation of Carlo Goldoni’s 1746 Commedia dell’ Art scripted play A Servant of Two Masters, translated into Cockney English as One Man, Two Guvnors, opened this weekend at Seattle Center Theatre to a highly appreciative audience in splendid air-conditioning. Directed by Ken Michels and produced by Sound Theatre Company, it highlighted some interesting problems concerning the adaptation of physical comedy into a script written in a dialect known for verbal circumlocution and wit. 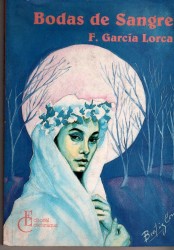 Frederico Garcia Lorca, one of the most important figures in the intellectual and political history of early 20th century Spain, seems to be having a revival around Seattle, since in the past few years, I have seen a three plays either by him or inspired by him. Directed by Ana Maria Campoy, this weekend at Ballard Commons, far away from the noise of airplanes, 1-Off Productions staged an outdoor production of Blood Wedding ( Bodas de Sangre) in what was called a “bilingual production”. Given that it was far away from the flight pattern in Volunteer Park and was staged in front of a lovely grove of Birch trees, it was by far the most pleasant place to stage outdoor theatre in Seattle I have yet seen.

We’ve been visiting Ashland and its Oregon Shakespeare Festival for over twenty-five years now and are consistently impressed with both its quality and desire to continually improve its product. The workmanship, focus and sheer pizzazz of its current productions are remarkable. Yes, it is a long drive from the Puget Sound, but if you enjoy live theatre and have the time and resources, we urge you to head south for this year’s offerings from OSF. Here are a few of the shows we were able to catch on our visit.