Kayla Lian as Rosaline and Paul Stuart as Berowne
Past

Love’s Labour’s Lost could be entitled Lust’s Labour’s Lost, because its central theme is that the expressions of love may be just as self-indulgent as lust and that is advisable before marriage distinguish between hormonal love and husband material. To emphasize the self-indulgent nature of men, the director of Seattle Shakespeare’s current production of LLL, Jon Kretzu, opens the play the morning after a party of the Bright Young Things of the 1920’s immortalized by Evelyn Waugh in numerous novels including Vile Bodies and Brideshead Revisited. 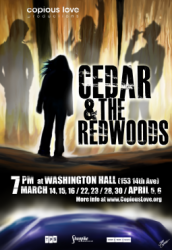 One thing is certain: the name of this theatre company is quite fitting given the amount of love and passion that was demonstrated on the stage of the Historical Washington Center during the opening night performance of Copious Love Productions’ two-act, psycho-road-trip-drama, “Cedar & the Redwoods.”   The opening monologue by co-director, John Paul Sharp, […] 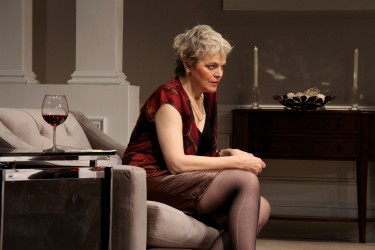 Say what you will about class warfare – it sure makes for wonderful drama.  David Lindsay-Abaire’s latest work has its Northwest debut at the Rep, and it simply crackles with insightful wit and entertaining conflict.  The time is now, right now and good jobs for our struggling lower class are still maddeningly […]

Riley Donahue as Claudio and Megan Jackson as Beatrice
Past

Paper Bullets-Inspired by Much Ado about Nothing

One of the truly distressing things about American Shakespeare productions is that they are usually staged as fossilized productions, set in the era in which they were written. Drawing loosely on the plot, power-dynamics and characters of Much Ado about Nothing, Paper Bullets, by John A. Ellis, is set in contemporary Hollywood.