The Waltz of the Toreadors at Dukesbay Theater review

Dukesbay Productions brings Jean Anouilh’s seldom-performed comedy The Waltz of the Toreadors to Tacoma. The production’s ambitions often surpass the cast’s ability, but the quality of the script still makes for an enjoyable night at the theater. The Waltz of the Toreadors was first performed in 1951, but the clever script can still make present-day […]

I wish I could tell you all what I just watched after coming out of Dean Jacob’s Funeral, but I am not quite sure. It was certainly meant to be a funeral, and there was a Reverend that was meant to be more of a spiritual guide than religious figure. There were two people in […]

Askew, a collection of four one-acts, will have you falling our of your seat with its hilarity. While there is a slight connection between the pieces, dealing with the thought of how to live in our world today, each piece can be fully enjoyed without any context or as their own. Written by Debra Rich […]

Nik Doner presented his performance of a genre I would call comedy-memoir to a packed Black Box Theatre crowd this Saturday. Directed by Hannah Victoria Frankin with Hannah Mootz and Hannah Ruwe as exotic dancers to add true-to-lifeness. This show also featured video projection of some of Nik’s home movies and a stretch of a car crash video game as he narrated one particular drunken driving experience.

Part of the charms of attending performance entertainment like Cuddling with Strippers is the safe peek it offers into worlds alien to my own.

What Would Our Mothers Think?
Past

2017 SEATTLE FRINGE FESTIVAL: WHAT WOULD OUR MOTHERS THINK?

One of the early lines from this play is, “People have terrible memories and they’re never happy in the present.” Which could be interpreted as, many people never thoroughly analyze the past and many people conveniently imagine the good old days have passed them by, lamenting the present as the pits.

When looking over the program for the 2017 Seattle Fringe Festival* three words popped off the page: John. Patrick. Shanley. Yes, Lungfish Productions and Lion. Fish. Theater. Company bring us a play written by the author of Doubt and the movie Moonstruck during his struggling years. Shanley himself was 34 when he wrote about a motley collection of five high school classmates who drift into the same bar, like a joke with no punchline.

Shanley sets this play on a dreary no-action Monday night in an even drearier 1983 Bronx. In 1983, commercial, civic, and political so-called leaders were letting the Bronx literally fall apart, and the lives of these five were stalled as well. As the audience enters Murk (Jared Baron Spears) is well established behind the bar and actually dispensed drinks to the audience, if their tastes ran to wine or beer.

“A Proper Place” at Village Theatre

The world premier performance of the new musical “A Proper Place,” is currently underway at Village Theatre. Penned by Leslie Becker and Curtis Rhodea and based on the 1902 story, “The Admirable Crichton,” by J. M. Barrie (best known as the creator of Peter Pan), “A Proper Place” comes across as a mash-up of My […]

“This is right out of a Mike Hammer novel…all the books start with a dame in trouble.” A relationship play set in Seattle. Woman Without Her Coat is one of the many plays from the Seattle Fringe Festival at the Eclectic Theater, Capitol Hill. It is written by Seattle native and longtime playwright, Jorj Savage. […]

2017 Seattle Fringe Festival: Dancing on the Wall- A review by Nick Nguyen. Dancing on the Wall attempts to give us a look in to the (possible) future – one with a wall, with growing class divisions, racial divisions, and the threat of war even closer. This piece, created by the Tessellation Dance Project and […] 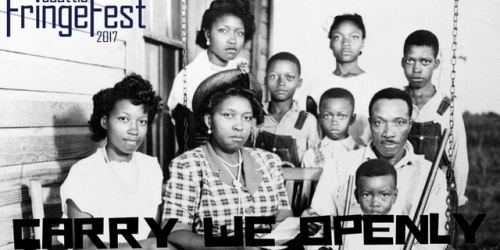 Carry We Openly Asks Just how Absurd can the US Gun Culture Get?

A little over two years ago the writer-director team of Nick Stokes and José Amador premiered Carry We Openly in tandem with Openly We Carry by Paul Mullin at Theater off Jackson. They have revived it for this year’s Fringe Festival* for four performances at the Center Stage in Seattle Center.

Lights up and we find Justice (Stefan Richmand) and his mother Felicity (Abie Ekenezar) frantically looking for It. Eventually, Justice’s grandfather and Felicity’s father, Liberty (Bob Williams) awakens and joins the search. For the duration of the play all the characters look for It, and It never seems to be found. One is not quite clear just what It is. They look everywhere.