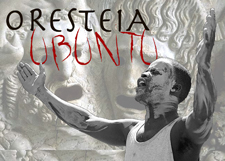 Oresteia: Ubuntu is a powerful show, mixing a classic Greek revenge cycle with testimony from the Truth and Reconciliation Commission that manages to deliver a message of peace through a blood-red lens. The show’s main weakness: without a background on the Trojan War and South African apartheid, confusion will ensue. Fortunately for you readers out […]

Black Comedy and Sure Thing

Peter Shaffer’s 1965 Black Comedy, preceded by David Ives ten-minute “curtain-warmer Sure Thing, opened at Strawberry Workshop at the Erickson Theatre Off Broadway on Thursday night. Although the curtain warmer was funnier than the main attraction, they were both hilarious. 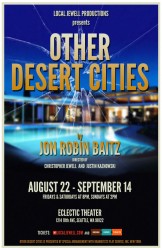 Local Jewell Productions’ take on Other Desert Cities by Jon Robin Raitz at the Eclectic Theater on Capital Hill probably will get better with time. This is a family drama set at the desert home of the connected, Jewish, Republican, Wyeth family. Themes of loyalty, honor, love, justified violence, and creative freedom clash over two days around Christmas in 2004. I think Raitz wants us to feel a strong desire

Questions of the Heart: Gay Mormons and the Search for Identify

“If you’re going to be born gay, don’t be born Mormon”

“I love being Mormon” was the opening line of Questions of the Heart, spoken by what looked like a quintessential whitebread American, as he listened to some beautiful liturgical music sung by the Mormon tabernacle choir 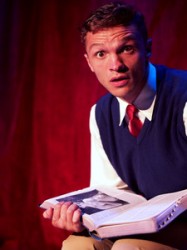 Noah Duffy’s original one-man show “Caught One-Handed” offers a joyful and irreverent portrait of what happens when a gay child is raised among Christian fundamentalist ideals. The audience follows Duffy on a journey through his own unique childhood, and on the way encounters all the weirdness of both gay culture and Christian faith traditions, along […]

Life=Play, An Evening of Short Works and Rarities by Samuel Beckett

The Seattle Beckett Festival opened this week at West of Lenin with Life=Play an Evening of Short Works and Rarities by Samuel Beckett. Of the four plays presented, two were absolute duds, one was reasonably entertaining and the fourth, La dernière bande ( Krappe’s Last Tape), presented in French, reached into the stratosphere of delight. 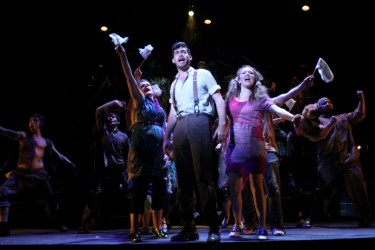 Urinetown has to be one of the quirkiest musicals ever to grace Broadway theatre. It debuted in 1999 at the New York International Fringe Festival, but by 2001 it had flowed (sorry that will be my only bathroom pun, promise) right up to Broadway. It is a wacky potpourri, throwing together political and social commentary, environmentalism, love stories and Broadway musical parodies. Director Jake Groshong somehow is able to have his troops pull the whole thing off in a spirited combined effort from Balagan and Seattle Musical Theatre.

Hold these Truths by Jeanne Sakata, directed by Lisa Rothe and featuring Joel de La Fuente in a stellar one-man performance, shows up the unique strengths of theater. This play’s mix of fact and fiction depicts Gordon Hirabayashi’s principled stand against racist WW II policies that led to the internment of Japanese-Americans.