‘The Crucible’ Hauntingly Timely for WWCA

“The Crucible” is a based-on-true-events play written almost 70 years ago about happenings that took place nearly 330 years ago. As such, it should live on as a quality piece of playwright excellence, at the same time being dated, to say the least. After all, writing styles have changed since Arthur Miller’s heyday. As a society, we have CERTAINLY matured since the latter days of the 17th Century! Yeah, so one would think. As it turns out, the confluence of an alliance between a strict church and the law, along with some teenagers with only a passing relationship with truth telling, seems almost current. Western Washington Center for the Arts opened “The Crucible” last weekend. It’s a high-quality bit of theatre. If it also becomes a source of post-show conversation, all the better.

Among the too many events that should embarrass Americans of European descent, count the Salem witch trials among the more egregious. While they were no slaughtering and displacing of indigenous people, nor the slave trade, the witch trials are but one example of a group of people gone mad. In all, twenty-four people perished because of reactionary church people and some young ladies who played, “Her, not me” with the truth, and didn’t know how to take it back.

Have you ever played with a Ouija Board? Most of us have at one time or another, but how many of us believed what it said? You were pretty sure your friend was pushing it around. In the late-17th Century, giggly teenagers played a sort of combination Ouija/Bubble, Bubble, Toil, and Trouble game. They played it in the woods and scared one another to death. One night, (depending on who you believed), things got a little out of hand, and an adult wandered into the circle.

It is upon this canvas that Drama in the Hood witnessed several extraordinary performances. Nahshon Rhaburn’s John Proctor and Kristi Ann Jacobson’s Elizabeth Proctor are the best in the show. Mr. Rhaburn fairly sweats blood as he strives to do the right thing while sparing his wife (and, to be honest, himself) humiliation. For her part, Ms. Jacobson’s character goes through every emotion imaginable, except for humor. She is hurt, bewildered, understanding, and defiantly loyal in turn. When she faces with an upturned jaw and tears in her eyes what must be, the audience’s collective eyes fill, as well. These two actors are great when performing without the other, but they are transformative when together on the stage. 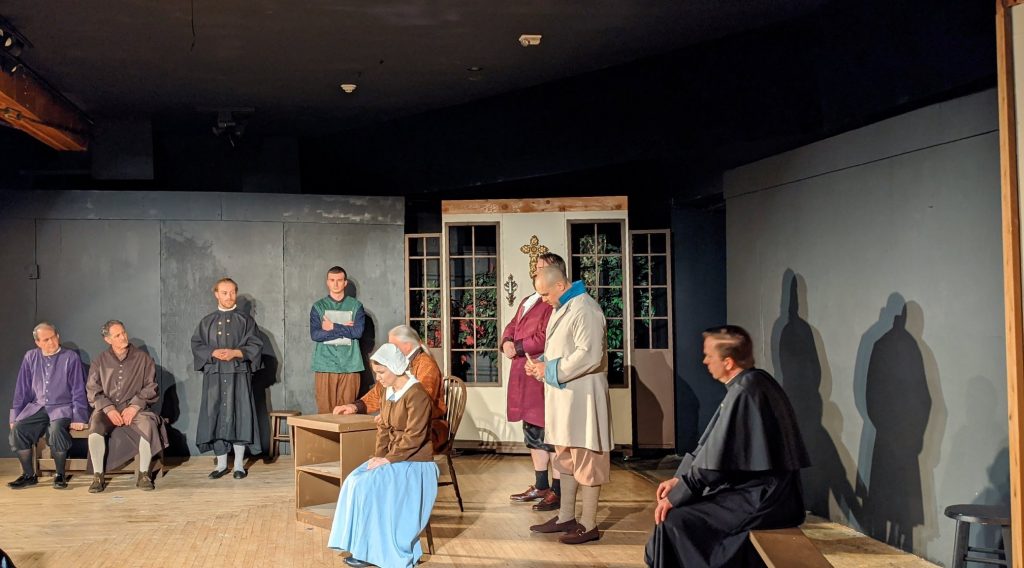 The ensemble cast of “The Crucible” at WWCA

Show Director Gary Fetterplace elicited strong performances from Emily Stecker-LaCroix, as Mary Warren, and Abby Dickson as Abigail Williams. Ms. Stecker-LaCroix’s anxiety and fear as the truth begins to out was palpable. Ms. Dickson’s performance as both a silly teen and an adulteress was so believable that one audience member said, “I wanted to call that one little brat a bad name on the way out.” Now, that’s acting!

Martin Goldsmith’s Giles Corey has one of the smaller roles by line count of the principal players, but Mr. Goldsmith plays it with great skill. His final line, delivered with great courage, actually brought about a brief chuckle in the audience. That said, laughter ought not be a first response to the events on this stage. You won’t be so moved if you are paying attention.

Just as no two pastors are alike, neither are this show’s men of the cloth. John Hemphill’s Rev. Parris has a heart for his people, albeit with a strong dose of career self-preservation. Kristopher Jones’ Rev. John Hale displays a disturbing trend toward blood lust for a supposed Man of God. The actors are excellent in the roles. Drama in the Hood would employ Rev. Parris for counseling and wedding prep. We would enlist Rev. Hale if we wanted someone smote.

Playing the role of Deputy Governor Danforth is Liam Finnolas McManus-Sanchez. It is an important role, and Mr. McManus-Sanchez is a fine actor, up to the task. That said, there were several dropped lines and dialogue missteps. We’re sure those are second-weekend fixes.

It is fair to say that you won’t see any other show quite like “The Crucible” during this theatre season. It’s a hard-working cast, with some astonishing performances! Do yourself, and the WWCA, a favor by purchasing tickets today.

‘Earnest’ Fun with Wilde at Western Washington Center for the Arts
March 10, 2019