I do not eat green eggs and ham, I do not eat them, Sam I Am. I do, however, have a soft spot for all things Dr. Seuss. As the newly official Drama in the Hood export to Kitsap County, finding “Seussical the Musical” at Western Washington Center For the Arts as the first offering made my heart happy. And Opening Night, at that! But, then doubt crept in just as surely as The Cat in the Hat grinned a mischievous grin. What if it was very lame, or what if it contained no game? What if I cottoned to it not, or if I found it sodden rot? How could I then impart such news, and give these folks the bluest blues?

Fortunately, my fears were allayed by a production long on sound and action. Using over 40 of Ted Geisel’s iconic Seuss stories, this show rockets through the material at a breakneck pace. Did anyone miss a note? Of course, but by the time we noticed, 100 more notes had gone by. Indeed, “Seussical the Musical” is best absorbed by letting these actors wash the goodwill over you like a warm bath. You’ll find yourself returning the goodwill tenfold. That’s what makes theatre companies such as WWCA successful. There is a trust built between the company and its loyal supporters. The former will put together its best effort, and the latter will squeal with delight, overlooking the bobbles, because the bobbles will be few. Director/Choreographer Rebecca Ewen made sure of that as she led a cast of 30+ through its paces with precision.

The mayhem gets underway with the appearance of The Cat in the Hat. Bored unless things are a little on the chaotic side, The Cat kicks things off with a little naughtiness and reappears if things appear to get too far under control. That’s the opposite way most of us live our lives, but Dr. Seuss tells his stories in a way different than other writers. As the Cat, Angela McDermott was spot on! This isn’t an easy role to play, since the Cat must walk a line that divides playful mischief from meanness and anarchy. Ms. McDermott walked that line as well as anyone we have seen in that role.

Also impressive in his role was Andrew Knickerbocker as Horton the Elephant. If there is a character in this show to emulate, Horton would be our choice. Good and kind, Horton’s loyalty and perseverance is a lesson to us all. Mr. Knickerbocker’s Horton keeps his head down and his eyes on the eg… er, prize. Kudos also to makeup designer Amy Knickerbocker (grab a program, folks. There are more Knickerbockers on this stage than in Madison Square Garden for an NBA game) who’s makeup work on Horton was great! Between Andrew and Amy, Horton is portrayed beautifully.

Sixth-Grader Aisha Sorter plays JoJo (and “Boy”) in this show. Her acting career is just beginning and it will be a joy to watch this talented young lady grow up on stage. Her love for the stage shows through in her every appearance on stage, and her light can shine for as long as she wishes it to shine. Strong performances were put forth by the aforementioned Amy Knickerbocker as Mayzie LaBird, and the three bird girls, played by Libby McDonald, Dannen Oliver, and Lola Pagel. Ms. Knickerbocker’s role calls for a certain amount of stage emoting, and she was up to the task. Interestingly enough, in a show where the singing was more enthusiastic than spot-on tuneful, the three Bird Girls, while singing together, sounded the best of any of the singers in the cast.

Before we leave the avian world we want to mention Abby Dickson’s heartfelt portrayal of Gertrude McFuzz (pictured below). In a role that teaches us to be careful what we wish for, Ms. Dickson made us hope upon hope that her dreams would come true. 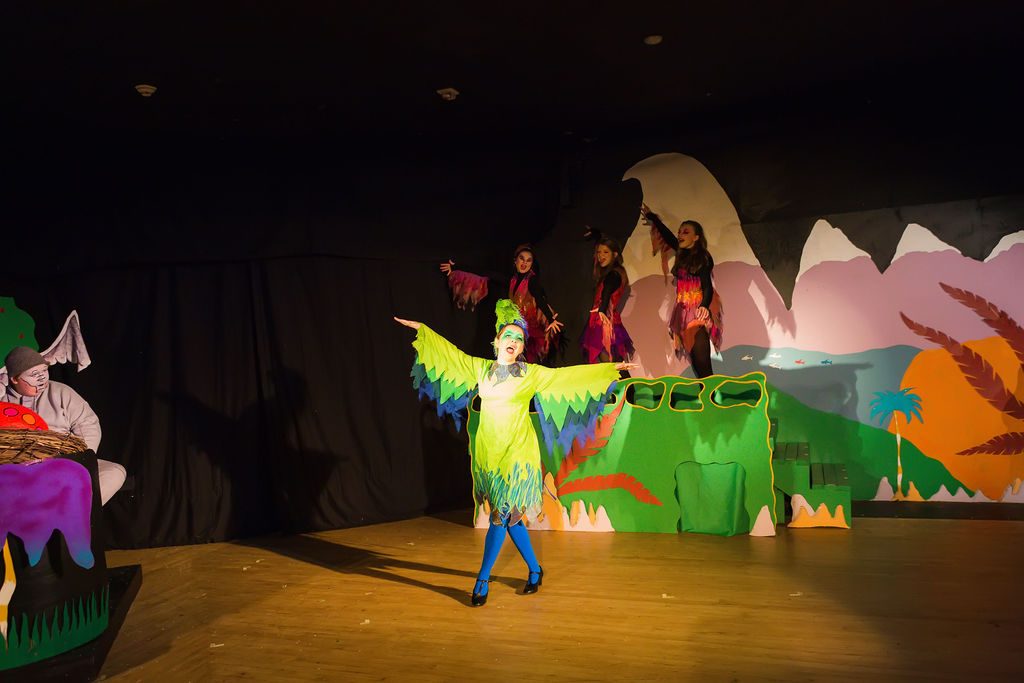 Abby Dickson as Gertrude McFuzz in “Seussical the Musical “at WWCA.

Reagan Borden as Sour Kangaroo was another memorable actor in this musical. The Sour Kangaroo is another tightrope role, because the sour isn’t supposed to be as all-inclusive as, say, Eeyore. But, there has to be a certain amount of that in the portrayal. Ms. Borden found the sweet spot in the sour role. Excellent work.

Many of the characters in “Seussical the Musical” come and go quickly. That must be the Eric Idle effect. Mr. Idle is a cast member of Monty Python (quick takes is a characteristic of that iconic troupe’s performances) and is a co-creator of this show. Among these quick turns we want to mention local favorite Stan Lingle for his Yertle the Turtle, Taryn Smith as Young Kangaroo,  and Erik Lawrence for General Genghis Khan Schmitz. All of them added a smile or two to a show full of them.

Finally, the littlest Knickerbocker of them all. Selene Knickerbocker, exactly one year old on Opening Night made her stage debut in this show and knocked it out of the park! A born performer, Selene likely interviewed agents backstage after signing autographs for the fans in attendance. Welcome to the stage, little one.

If Drama in the Hood was King of the World, we would offer a paid holiday for any adult who takes on the task of leading this many young ones through a production of this type. So, our kudos and congratulations go out to the production staff, as well as the parents who schlepped the kids back and forth to rehearsal and tech week. Everyone of you, to Tahiti for two weeks!

For the rest of you, WWCA deserves the same love and support as they got from the appreciative crowd in attendance Opening Night. Is this show The Phantom of the Opera at The George Gershwin Theatre? Certainly not, but these are talented and dedicated volunteers (and a stageful of delightful children) giving their lifeblood to the arts in Kitsap County. Drama in the Hood is proud to be officially in town. We’re going to review a curated menu of shows from WWCA and Bremerton Community Theatre, and can’t wait to see what’s next.