‘Earnest’ Fun with Wilde at Western Washington Center for the Arts

Oscar Wilde was a bit of a brat. The history books say as much, and much of his writings tell the same tale. None of what Wilde wrote better shows the inner brat than does “The Importance of Being Earnest.” The playwright skewers the British upper class and societal norms in general on his way to writing one of his funniest works. Western Washington Center for the Arts in Port Orchard opened “…Earnest” this weekend to appreciative crowds and more than one hoot and holler during the curtain call.

Love confounded Oscar Wilde (join the rest of us). Throughout much of his life, he sought to understand love as realized by homo sapiens. In “The Importance of Being Earnest” he suggests that affections are given out to all the wrong people for all the wrong reasons. Take Algernon Moncrieff and John Worthing. On the way to finding love, these lads happen upon two women bent on marrying an earnest Earnest.

Peader Sanchez and Jonathan O’Guin play Algernon and Jack, respectively. Director Kristi Ann Jacobson cast these two beautifully. Mr. Sanchez plays Algernon with a twinkle in his eye, as would fit a playboy during Oscar Wilde’s heyday. Mr. O’Guim plays Jack with less overt humor and more posh tweediness. It is an excellent choice, and Mr. O’Guin made his family (seated in the top row of the middle section) very proud.

Which fair maidens are the boys after? Why, Gwendolyn Fairfax and Cecily Cardew respectively, of course. Played to a tee (before and after tea) by Kelli McCauley and Erika Lehtonen respectively, the objects of desire were brilliant in this show! Ms. Lehtonen made the most of a small-ish role in Rumors on this same stage, and she knew her way around this stage, as well. In fact, this is her tenth outing with WWCA. Ms. Mcauley’s Gwendolyn is just her second time on this stage, but you can be sure she will be welcomed back at any time. 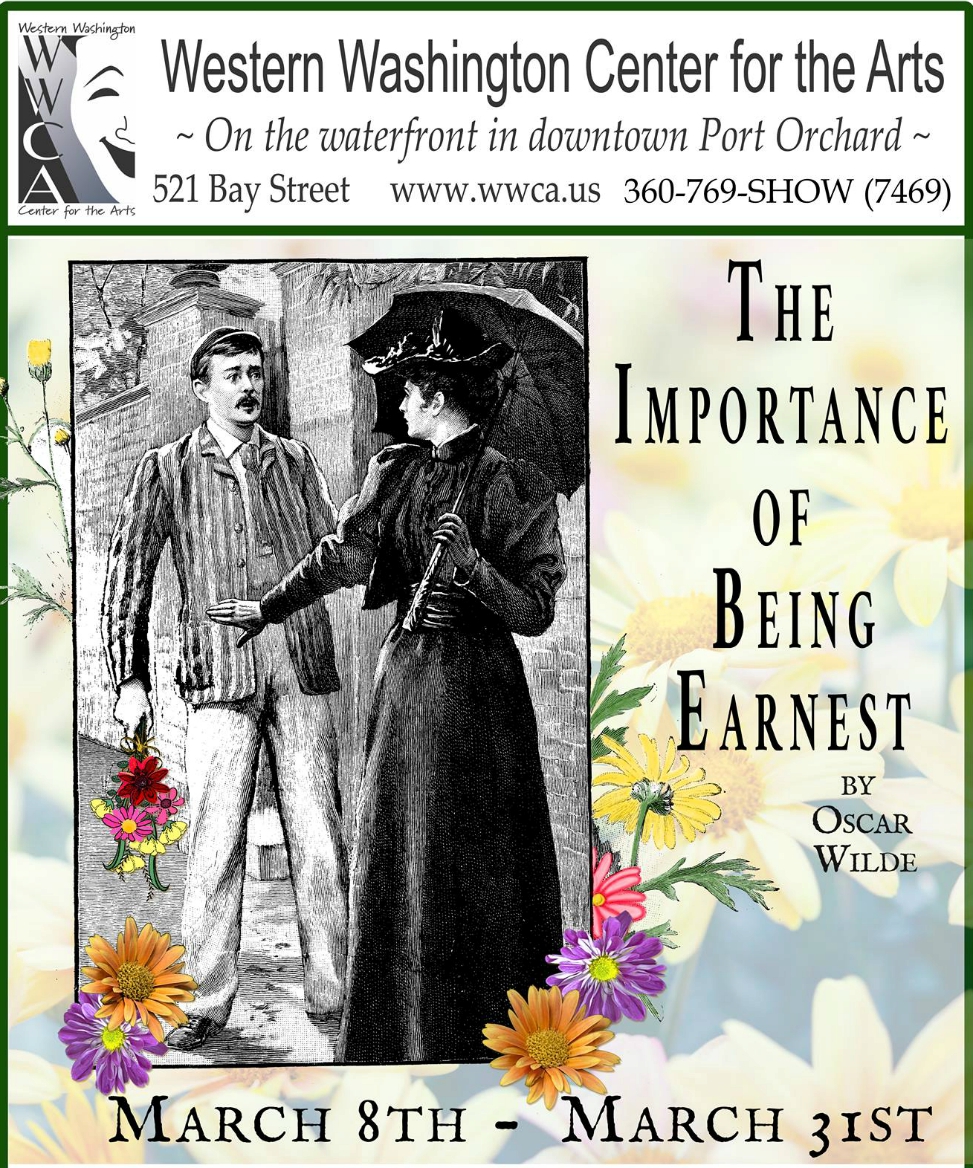 The leads in The Importance of Being Earnest are excellent, but this is a show with a deep and talented bench. Two character actors, in particular, need to be mentioned for their ability to act and emote without speaking. Rachael Dotson’s housekeeper Merriman and Gary Fetterplace’s manservant Lane are having a great time in this show unless Drama in the Hood misses our guess. Ms. Dotson is a newcomer to the area, and the area thanks her for her participation in South Sound theater. Please do not be a stranger. Merriman provided as many chuckles per minute on stage as anyone in the cast. Mr. Fetterplace is a renowned character actor in this region and is, 100% of the time, a delight to watch work. Not too many actors bring smiles to faces BEFORE the curtain, but Gary Fetterplace does and stays solidly in character throughout.

Liam Sanchez’ Lady Bracknell is superb! Oscar Wilde’s best work was in the area of vocal asides, and Lady Bracknell brought the house down with quiet asides and unexpected ends to her sentences. Listen carefully for the reason she doesn’t like arguments in the house. The end of that line made us laugh on the way home.

As the perplexed clergyman Canon Chasuble, Jerry Schneider did a very nice job. The action around him was sometimes fast and furious, but he remained clerical in the face of chaos. Katie Jones’s Miss Prism was spot-on. Ms. Jones is a valuable member of any cast she joins, and she has been in quite a few shows in quite a few theaters over the last couple of years. Her program bio indicates she might be up for a rest. One hopes the rest will be helpful…but short-lived. South Sound theater needs more Katie Jones’.

There are a lot of words in “The Importance of Being Earnest,” because Oscar Wilde was a prolific wordsmith. Save for a couple of bobbled lines on Opening Night this cast tackled the words, idioms, and accents, performing like the pros they are. We recommend this show to anyone who loves a good night out, because a fine show, put on by a superb cast from top to bottom is a great night out.

WWCA advertised a “wine and cheese” get-together for Opening Night, but what they served was more than that. It was a full-on gourmet buffet with delicious goodies for miles. First-night crowds receive top-notch treatment here. Remember that when you are deciding what night to see the rest of the shows that are part of the WWCA season.