‘Robin Hood’ at Centerstage a Forest Full of Fun

The ensemble cast of “Robin Hood” at Centerstage Theatre in Federal Way.

Thirteen months ago, Drama in the Hood (at least this Drama in the Hood guy) had yet to see “panto.” Now, after experiencing “Rapunzel” at Centerstage last season, we couldn’t wait to go again. Unlike any other kind of community theatre, the off-the-chain randomness, the pop culture references, and the quick, local humor make it a must-see for those with a sense of fun. Fractured Fairy Tales on a live stage. This year, Centerstage in Federal Way continues the annual tradition, now 18 years strong, with “Robin Hood.” It opened this weekend at the theatre in the woods. How appropriate for a show in which the forest is a character of its own.

One does not passively watch the action when attending a panto. Because part of the fun is to boo the baddies, wildly cheer the goodies, and say the random things the narrator tells you to say. Was there any good reason for Alana Dale, played by Jessie Selleck, to randomly pop her head out and say, “Are you merry?” Don’t ask silly questions. Just answer, “Very merry,” as she says. Partly, because you are trained to say whatever, and partly because Ms. Selleck’s character is one of the show’s most delightful. Dancing across the stage like a five-year-old who does it because “why not,” Alana keeps the action humming and elicits smiles throughout the show.

Helen Marion plays Maid Marion (has anyone noticed the… probably not) in “Robin Hood.” A little woman with a big voice, Ms. Marion deserves the wild applause she receives during the curtain call. Her performance is spot-on from start to finish.

Joshua Jerard is as gifted a stage performer as anyone in the Centerstage stable, and they are so lucky to have him on board. Mr. Jerard played Prince Caspian in last year’s panto and was also superb in “The Complete Works of William Shakespeare (Abridged)” on this stage. As Robin, Mr. Jerard swashbuckles with elan and displays the best singing voice in the cast. That honor was in a close contest with Helen Marion, and the musical highlight of the show took place when they sang together. One suspects Joshua Jerard’s light will flicker on the biggest of stages. See him while he is here.

Brad Cerenzia’s Nanny Nancy is a delight of performance and costume alike. In fact, costumer Janessa Jayne Styck could have shared Mr. Cerenzia’s curtain call with him. The outlandish achievement in attire architecture matched and supported the outrageous behavior Mr. Cerenzia performs so well. He’s a joy to see on a cast list. Refugio says Mr. Cerenzia’s back hair is magnificently wiry and thick, but we can only report what we hear in that regard.

Did we mention that there is booing? Henry Talbot Dorset’s Sheriff of Nottingham takes the booing in stride and gives the audience an earful back. That’s the way panto is supposed to work, and Mr. Dorset’s maiden voyage at Centerstage is a great success!

In smaller roles, we should mention Sam Barker and Cassie Jo Fastabend as Friar Tuck, and Dingleberry respectively. Mr. Barker’s recent performances on this stage include “Pillow Talk,” and “Bye, Bye, Birdie.” He made those roles his own with excellent comic timing and stage presence. So it is as the cleric with a yellow streak down his back. Ms. Fastabend choreographed the show, and her dual-threat abilities are noteworthy. In the last few years, she has stretched herself as a performer and is one to watch in whatever direction she decides to go in her career. 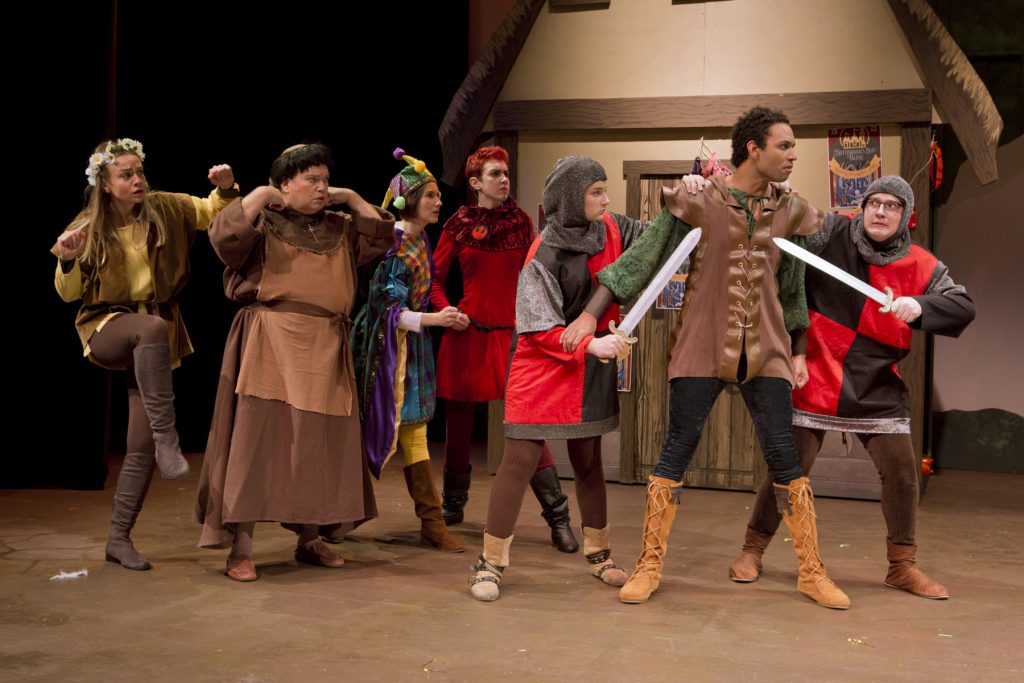 The ensemble cast of “Robin Hood” at Centerstage Theatre in Federal Way.

A direction she may decide not to go is live interviewing. During the Saturday evening on-stage Q and A with children from the audience (panto is big on this kind of thing), Ms. Fastabend asked the innocuous “What’s on your Christmas list” question, and followed it up with “you have to have one.” It turns out you do not “have to have one”…if you are Jewish!

A live band is too rare in today’s budget-conscious community theatre offerings, but “Robin Hood” is better for the efforts of its four-piece band. Kudos to Sam Peters on the keyboard, Julee Felts on bass, Tai Taitano on skins, and Cam Schneider on guitar.

The holiday season can be a month with a double-edged sword. The joy of giving crashes into the stress of buying. Family get-togethers turn out to be better in theory than in fact. By the time Christmas (or Hannukah, Ms. Fastabend) comes, a nap lasting four days is in order. Don’t let that happen! We recommend a night or Sunday afternoon with Robin Hood, his merry men, women, and otherwise. It’s an annual treat that you will mark on your calendar for future years.

After a dicey-ish year on the brink, Drama in the Hood celebrates with Centerstage its relative health and well-being. It’s an important square in the quilt that makes up South Sound theatre. Your attendance at this show will benefit your funny bone, and the coffers of Centerstage Theatre. Near-capacity crowds opening weekend speak to this show’s popularity, as well as the necessity for you to plan your trip to Sherwood Forest before you are shut out. See the contact information below, and enjoy yourself. You can scarcely do otherwise at a panto.

‘Hound of the Baskervilles’ Stylish Drama at Centerstage
October 9, 2019