Centerstage’s ‘Let There Be Love” a Deft and Clever Work 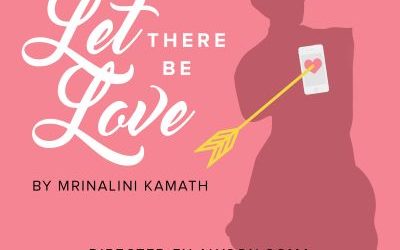 It seems longer than a year ago that Centerstage Theatre was on shaky financial ground. They were beset by the budget issues that plague community theatre everywhere. Many theatre folks want to blame youth and high school sports, but sports programs are suffering, too. The problem is deeper rooted in what communities cherish and are willing to pay taxes to support. But, Centerstage’s story is not one of peril. Angels in and out of Federal Way, and in and out of city government cared, and the lovely Dumas Bay theatre rings with music and dialogue and sparkles with stage lighting. Last weekend, Centerstage celebrated with a World Premiere production. “Let There Be Love,” debuted to capacity crowds…after a power outage on Friday delayed Opening Night by 24 hours. It is a winner on several levels, made even more special by the attendance of playwright Mrinalini Kamath in the audience.

In days gone by, our love lives were dictated by the number of miles we could travel in a day. By horse and buggy, that was about twenty. If Laurey Williams lived more than 20 miles from Curly McLain, he would have had to settle for Ado Annie instead. That would have changed “Oklahoma” forever.

The advent of the personal car stretched our love options. Danny could drive 50 miles one way to woo Sandy and make her sing, “You’re the One That I Want (Woo-ooh-ooh).” Now, that all seems so quaint. Match.com and eHarmony.com pair us up forever. Tinder pairs us up for a few hours. We can carry on, or discard, relationships with people thousands of miles away with a swipe right or left.”Let There Be Love” pits online algorithms and one-on-one encounters against each other in a show that is as timely as it is well-performed.

Sonia Alexis plays DeeDee. A relationship expert, due to her online marketing success, DeeDee hides a secret. Her performance is so believable that the secret (I won’t spoil it) genuinely surprises the audience. This is Ms. Alexis’ debut performance on this stage, and it is a success! When she gives a mock Ted Talk toward the audience, several in the crowd responded with answers, as if she was conducting a seminar. It takes a real actor to break through to an audience in that way. 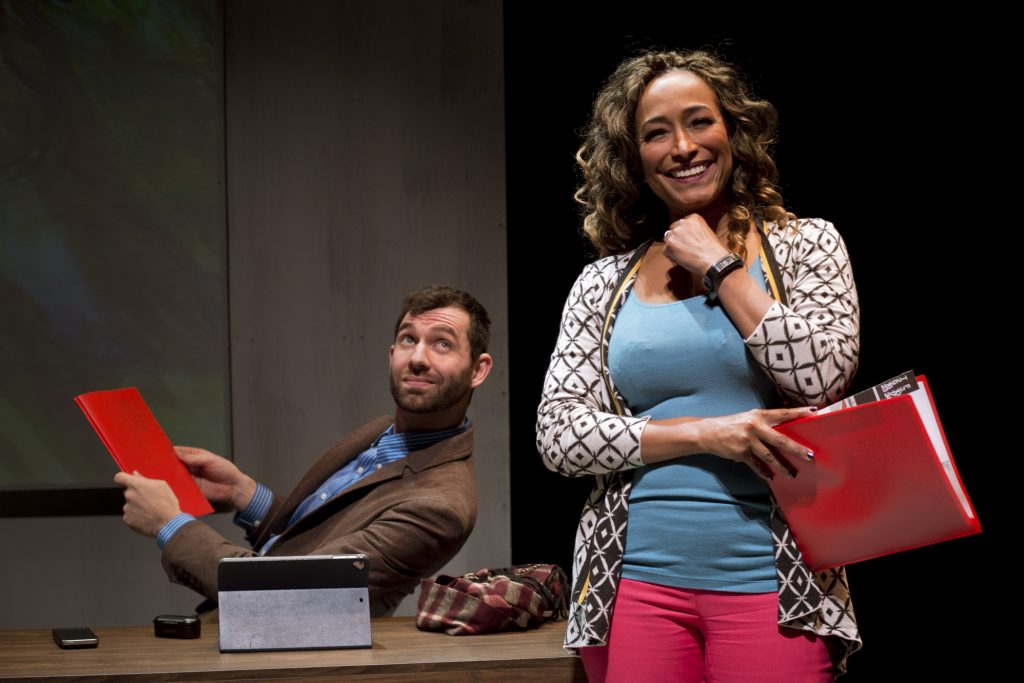 Timothy Duval and Sonia Alexis in Centerstage Theatre’s “Let There Be Love.” Photo by Michael Smith-Lewis

Timothy Duval plays Eric, in the most ambitious role Drama in the Hood has seen from him. It is a role that requires a good deal of physical action and reaction. Mr. Duval’s expressive face and rubberized body is up to it all.

Justine Davis is an actress of some national renown, and her performance as Sylvia burnishes her reputation. It is said that an actor is not great through grand gestures, but through an arching of the eyebrow. Ms. Davis’ subtle expressions and body language show off an accomplished performer.

Ted Gentry plays the laconic “Man in the Baseball Cap.” His mustache and manner are reminiscent of Sam Elliott to the point that I kept expecting to be offered a “Coors, the Banquet Beer.” In another bit of subtle performance art, there is a certain menace to his stage stylings. It is an excellent choice by Mr. Gentry and Director Alyson Soma. It is not a huge part, but Ted Gentry gets more out of it than his line count would suggest.

Pratik Shah plays Rajesh. His character is a love-seeker (who isn’t on and off this stage?) and exposes the vulnerability of his soul to the audience. There is a sweetness to his character that makes you root harder for him than for anyone else in the show. In a cast of stage professionals, Mr. Shah takes a back seat to no one else.

Alyson Soma is a veteran Director, which is a good thing. “Let There Be Love” requires a touch that is tender confidence. That isn’t an easy path to walk, but Ms. Soma walks it with grace. This show has a way of indicating that one character is thinking about another that is unique and beautifully performed. That’s just one of Alyson Soma’s deft touches with this work. She was the perfect choice.

The staff and management of Centerstage are in the middle of a “friend-raiser.” Veteran theatre-goers are supposed to befriend newbies and welcome them to the theatre. If, for example, you become besties and celebrate with season tickets to next year’s shows all the better. It is a subtle (okay, not terribly subtle) way of helping Centerstage continue its path to financial solvency and onward to complete South Sound stage domination. But first, financial solvency. You can do a small part in that goal by buying tickets to this show. It is a show worth seeing in a theatre worth supporting. We recommend both. You won’t be sorry.

‘Hound of the Baskervilles’ Stylish Drama at Centerstage
October 9, 2019