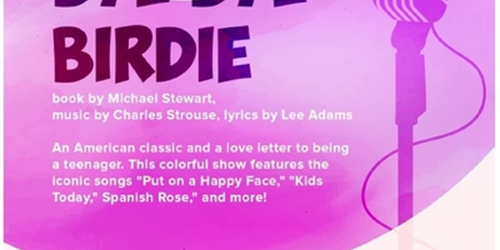 “Bye Bye Birdie” began as a Tony-Award winning play during the 1960-61 Broadway season. While Broadway-goers may remember that one, the 1963 Ann-Margret movie is the “Bye Bye Birdie” that most will remember. In it, the loveliness that was (and is) Ann-Margret played Kim MacAfee, the girl on whose tender lips the Elvis Presley inspired Conrad Birdie would plant one last kiss before going into the Army. The show is a natural for community theater in general, and in particular for Federal Way’s Centerstage Theatre for reasons that we will discuss shortly. It opened this weekend to audiences who were particularly supportive. Applause rained down on the stage after practically every song, and occasionally after scenes in which there were no songs at all. The synergy between the stage and the audience was evident from the start.

Why “in particular for Federal Way’s Centerstage Theatre?” This theater operation takes “Pay it forward” seriously, in that it sponsors a vast internship program for the youth in area high schools. These interns are involved in the production from the outset to the final curtain call, doing everything from helping with set design to taking tickets to performing in the ensemble. Valuable experience is offered young people to help them decide whether or not a future working in theater is something they would like to do. It is a service that does not come cheap, yet is offered free of charge to teenagers (and some pre-teens) in the South Sound. “Bye Bye Birdie” is stage-packed with teenagers, and to know they are availing themselves of the valuable resources offered by Centerstage makes this play that much more appealing.

Not that this production of “Bye Bye Birdie” needs much help to appeal.  The energy from the stage is palpable, helped along by the aforementioned crowd response. Though the story is ostensibly about Birdie and Kim MacAfee, the two stars are actually record executive Albert J. Peterson and his long-suffering girlfriend/administrative assistant Rose. Played by Joshua Jerard and Lara McLeod respectively, these two seasoned performers showed the way to the younger players. Mr Gerard is a particular critical favorite in the South Sound, having performed beautifully on this stage in Rapunzel, and the Complete Works of William Shakespeare (Abridged). Ms. McLeod showed real acting chops as well with a more-than-adequate singing voice in her portrayal of Rose. An undertaking of this magnitude requires veteran leadership and these two shared the task and shared it very nicely.

Jasmyne Mendoza interprets the role of the starstruck Kim in this show. With a deft touch for teen angst, Ms. Mendoza was very effective n the role. She had some of her best moments when playing opposite Lara McLeod. The two discuss beautifully what they ever saw in the men they love.

Sam Barker plays Kim’s Dad in a role well-remembered as Paul Lynde’s in both the stage and movie version. It isn’t easy to follow Paul Lynde, but Mr. Barker is great! His comedic timing makes him a valuable part of any show, and Centerstage is lucky to have him in its stable of talent.

Kim’s Mom is a fairly small role, but Alyssa Hersey gets the most of her time on stage. She’s the best singer in the cast, and supports the action around her with a graceful nuance. Director Erin Murray cast well with this one.

Duncan Menzies’ Conrad Birdie should get two curtain calls and program entries for this show. One for Duncan and another for his hips, which take on a character of their own. One of the most entertaining parts of the show takes place when Conrad Birdie climbs the stairs into the audience and causes the girls to faint. Actually, Jasmyne Mendoza’s all-out faint was one of her best moments here too.

Teenage jealousy runs through a boy’s veins and pops out through his fists. It has ever been thus. Donovan Mahannah’s Hugo Peabody shows his stuff as a defender of his territory and paramour to Kim. Mr. Mahannah is actually a part of the teen internship program. He performed as an actor with experience beyond what is listed in the program, and deserves the applause he received.

The ensemble is large and enthusiastic, but a few members stood out for mention. Harrison Gomes’ Harvey Johnson was entertaining, particularly in the telephone tag number very near the beginning of the show. Jessica Lorenz did an excellent job as an applicant going after Rose’s employment position, as well as in the dancing numbers she performed. Finally, Kalie Martin and Kim Myers stood out in the ensemble with excellent performances. 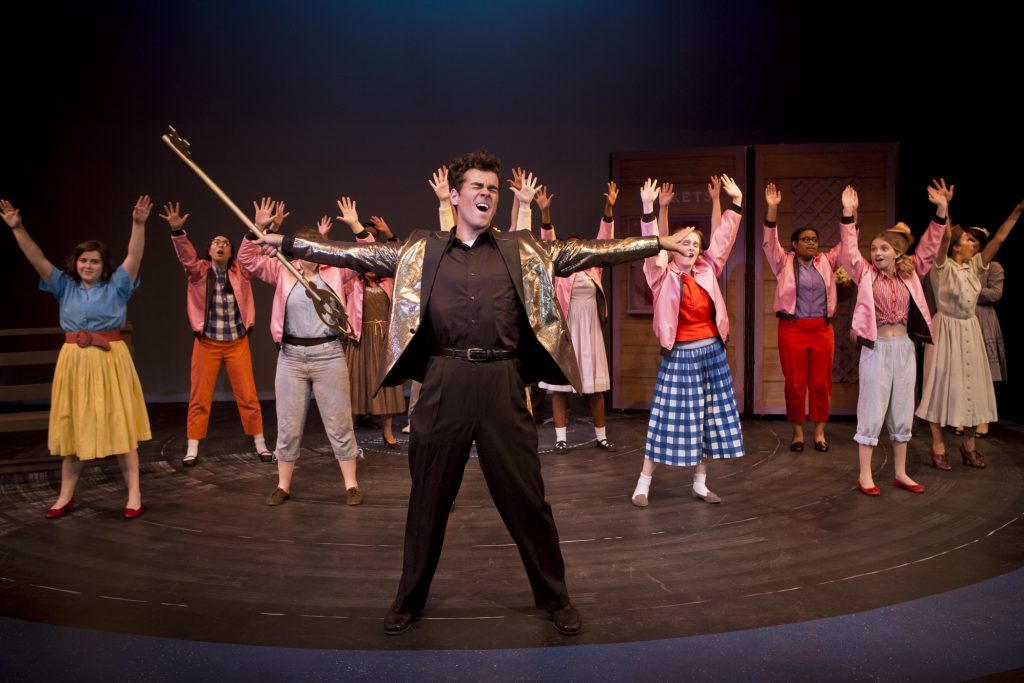 The cast of “Bye Bye Birdie” at Centerstage Theatre. Photo by Michelle Smith-Lewis.

A few words about costume and choreography are in order for this production. The period costumes were spot on and the performers were carried into the era, just by donning the threads. Janessa Styck and her crew are responsible for the excellent costuming. Jimmy Shields’ task of choreography was especially difficult by the hordes of singers and dancers on stage. His work was superb in this show.

It has been said that there are two kinds of boys and girls, quitters and triers. Drama in the Hood declares Centerstage a trier, fighting its way off the ropes of poverty and back in the mix of South Sound theaters. Is it completely in the black and solvent? Not yet, but it will get there and folks such as yourself will get them over the line. “Bye Bye Birdie” is good clean fun for the whole family. So, take the whole family. Opening Weekend crowds were good, but tickets are still available for the shows this weekend and beyond.