‘Hound of the Baskervilles’ Stylish Drama at Centerstage

Hound of the Baskervilles showed up in 1901 as the third of four Sherlock Holmes novels, and the first since Holmes’ apparent demise in “The Adventure of the Final Problem,” published eight years earlier. Actually, Arthur Conan Doyle had wearied of his famous sleuth, and wished to concentrate on his historical writing. He once said, “I weary of his name.” Fans of Holmes, and his Watson, never suffered the same malady, and Holmes fans live on to this day. Federal Way’s Centerstage Theatre taps into that interest with a most stylish presentation of “The Hound of the Baskervilles.” It opened last weekend and continues for three more weekends. The new Centerstage season could not be off to a better start!

This is an ensemble piece, and that ensemble stretches off stage to some of the best set and costume work seen on South Sound stages in a long time. Scenic designer Jyles Rodgers is due wild applause for the stage drapery that truly evokes the dour moors of England. Costume designer Jocelyn Fowler, a “clothe the actors” legend in the South Sound came through again, with period pieces that are accurate, without being caricatures of the Victorian Era.

Backed up by such superb set and dressing work, Tom Livingston is free to display his inner Sherlock. We say “inner” advisedly, because some of Mr. Livingston’s verbal pacing takes place very quickly! Is this appropriate, or an actor’s conceit? To answer, think about your own inner dialogue. It goes quickly. In fact, it goes much faster than your spoken words. Since Sherlock Holmes “deductions” are, in fact, inner dialogue he shares aloud, it is appropriate that it go quickly from Holmes’ mouth to the audience’s ears. Mr. Livingston “deduces” at a breakneck pace, almost daring the audience to follow along. After a couple of tries, Drama in the Hood found it an exhilarating exercise in listening!

When you go to this play, trust your ears and your comprehension. Soon, you will be galloping along with Sherlock Holmes on your way to solving the crime. Trust us, its Sherlock Holmes by way of Freddie Mercury in terms of pace, but you will catch on and love the ride it gives you. 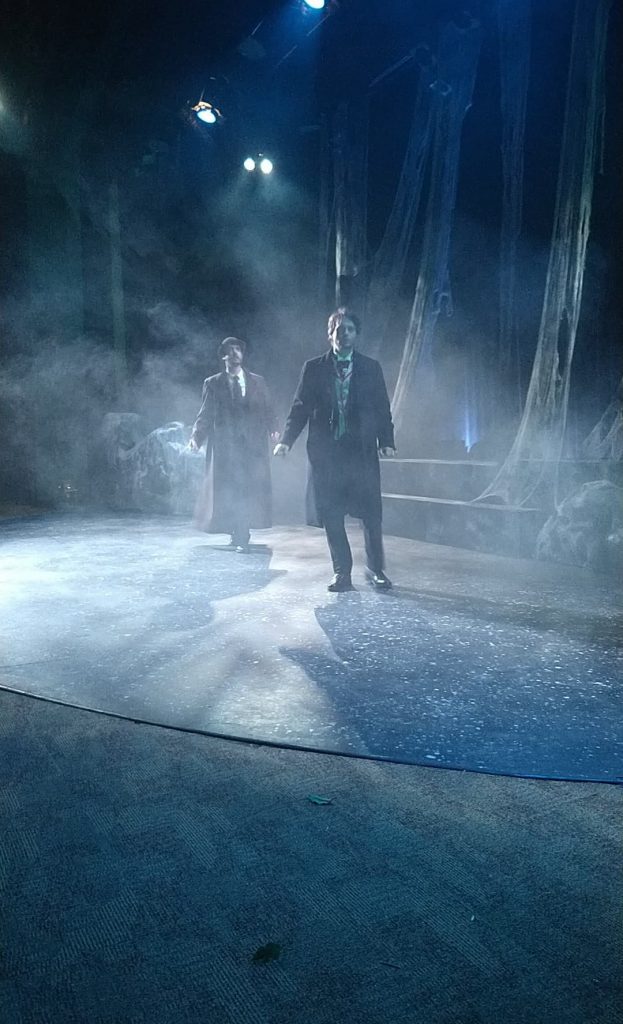 Jacob Tice as Watson and Tom Livingston as Holmes in “The Hound of the Baskervilles” Photo credit Tori Dewar.

Dr. Watson is a lush role in the Holmes canon, and South Sound critical favorite Jacob Tice is more than up to the task. Mr. Tice would be capable of playing either Holmes or Watson and doing them both with skill and expertise. Jacob Tice is that good and it is Drama in the Hood’s pleasure to watch him continue to grow in his artistry. In this show, he is at his best when frustrated with his friend, who’s cat and mouse games appear to be eccentrically capricious and arbitrary.

Robin Mae Becar plays Beryl Stapleton, and is fortunate enough to be clothed in Jocelyn Fowler’s finery for much of the show. Ms. Becar is coquettish when the role calls for it, and extraordinarily capable when the role calls for that. Her role is the one that travels the furthest in this show, and Ms. Becar is up to the task from curtain up to curtain down. According to the program cast notes, she has degrees from Western Washington University in Business Management and French. The Fortune 500’s and foreign service industry’s loss is theatre’s gain. She is a fine performer.

Kudos are due to many others in the ensemble production, not least of all Charles Riccardo as Sir Henry Baskerville. Mr. Riccardo’s portrayal of the differences between Americans and our British friends was nuanced and crisp. This role could easily become a parody of itself, with its references to riding horses and hunting game. Charles Riccardo walked up to that line and stepped away from it expertly. Very well done.

Shawn Backstrom’s Jack Stapleton was a well done part in this play. Mr. Stapleton’s occasional fits of high dudgeon come organically out of the action, rather than seeming stapled to it. That’s Mr. Backstrom’s work staying in character and displaying the tone and tenor of the period. Such chivalry! Excellent work.

In smaller roles, Timothy Duval’s James Mortimer, Dale Bowers’ Mr. Frankland and Paul Sobrie’s Barrymore blend their talents into this lovely work. Craig Rock makes his long-awaited return to the stage after a hiatus of almost three decades. Welcome back, sir! Finally, Eloisa Cardona plays two roles and changes between them seamlessly. We were impressed with her work, as well.

Just as the set design and costumes for “Hound of the Baskervilles” come up to par, and well beyond, props designer Jeff Wallace was on the job. The tomatoes and bread are real! What a nice touch of realism, not to mention a chance to support Jacob Tice’s blood sugar during his performance.

“Walked up to the line.” That isn’t just a commentary on Charles Riccardo’s performance. A year ago, Centerstage Theatre walked up to the line of extinction until some philanthropic business entities and some personal angels decided that this was not going to happen on their watch! For now, it appears this valuable cultural asset, putting on shows in the woodsy environs of west Federal Way, has stepped away from the brink. Drama in the Hood could not be more pleased! So, Centerstage doesn’t need you any more?

Zounds, Watson, that couldn’t be further from the truth! Fundraising for community theatre never stops, and Centerstage will never turn your check aside. Or, you could buy a ticket to “Hound of the Baskervilles,” or a season ticket to the great shows scheduled to appear on this stage. (We’re excited for the Robin Hood Panto, but maybe that’s just our weirdness.) Either way, we must not lose our vigilance for this patient, just because it isn’t at death’s door. We want community theater in this town to survive, thrive, and be a beacon of success for all to see.