Bainbridge Performing Arts’ “Rocky Horror” Not Horrible At All

Are there any two words that evoke a night of entertainment more than “Rocky Horror?” Okay, maybe “Rose Bud,” but that’s actually one word “Heeere’s Johnny!” comes close but could be mistaken for a talk show with Don Rickles as a guest. No, “Rocky Horror” has become synonymous with cult classicism since the night the movie debuted Friday, Sept. 26, 1975. Bainbridge Performing Arts put its own special spin on “Rocky Horror” last weekend, and it turned out to be a high-energy night of escapism and classic songs and humor. Did it work for BPA? *Expletive* yeah, it did. What did you *expletive* expect?

How to keep a show fresh? That’s a dilemma for any theatre company that puts out a classic, because stale theater has a distinct old lettuce smell to it. It’s a particularly difficult dilemma this time around for BPA, because “The Rocky Horror Show,” is on stage all over the area. Drama in the Hood fully expects that the Sakya Monastery of Tibetan Buddhism in Seattle will announce theirs any day. So, BPA kept the product fresh by leaking the performers into the lobby and the parking lot, then putting on the freshest curtain speech of the season thus far. After that, it was high energy mayhem until the curtain call.

“Rocky Horror” doesn’t get old for us, because no two shows feature the same outstanding roles. One production will feature Riff Raff as the star of the night. Other nights in other theaters Rocky or even the narrator will leave the strongest impression. But, it was Adam Minton in the role of Frank N. Furter who knocked our socks off on Opening Weekend. His was a performance that struck the right note between touching and flamboyant, without forgetting to go back to both. His bio shows an actor gifted in both drama and comedy. Now, he can add gifted in fishnets to the resume’. His performance will not soon be forgotten, and costume designer Dawn Janow can take her bow, as well. She skillfully clothed this cast, and performed her best work on Frank. 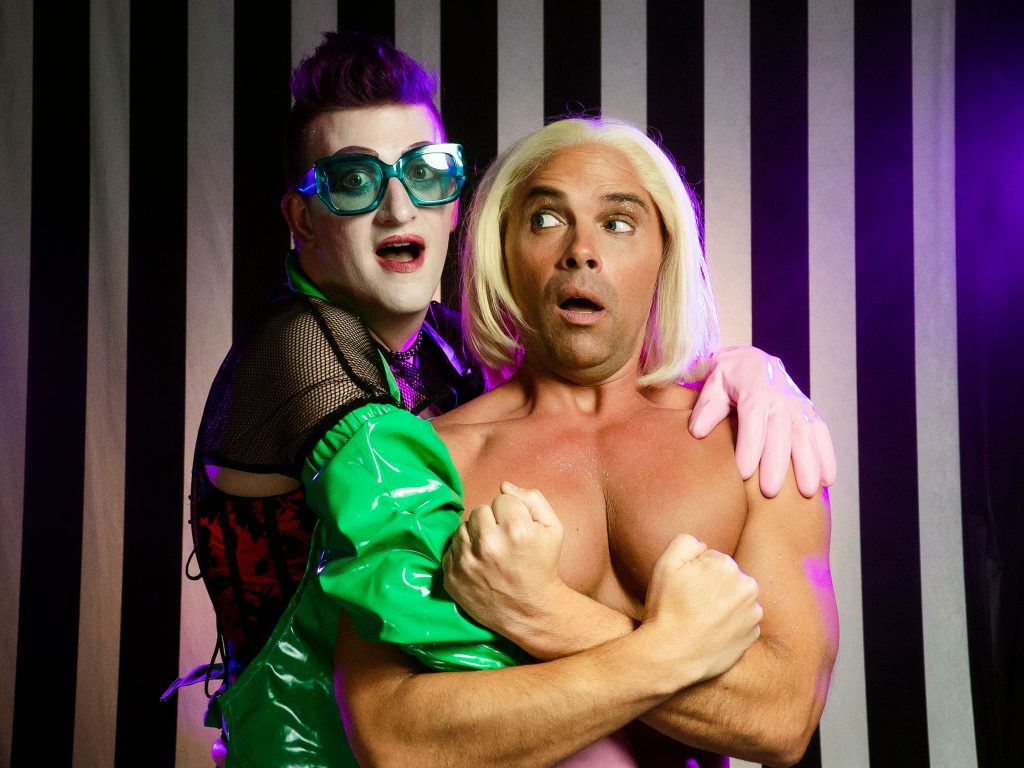 The roles of Brad and Janet are played by  Brandon Weglin and Mikaela Karter, and Director Joanna Hardie cleverly cast these two. Mr. Weglin and Ms. Karter manage to work wonderfully together while showing almost no romantic chemistry. That’s important, because, as we all know, Janet’s affections tend to travel a bit through the course of the show. Mr. Weglin’s performance brought to mind the nebbish Seymour from “Little Shop of Horrors,” and Ms. Karter’s singing voice was the best in the cast. Both descriptions should be taken as compliments for fine performances by two fine parts of this fun show.

Rachel Brinn is a critical favorite for past performances, but she has not been better than she is in this show. In a show where so many of the roles are over-the-top and more over-the-top, there is a nuance to the roles of Eddie and Dr. Scott. Ms. Brinn absorbs the chaos around her and performs her dance (at times, literally) with  small, precise movements and subtle voice changes. A “turn it to 11” show can devolve into a cacophony of sound and unbridled mayhem. Rachel Brinn kept the lid on, and was a true professional in her role.

The other nuanced role in the show is by the narrator. Andrea Ogg’s narration was precise, and her interaction with the audience appeared to be ad-libbed, though we know much of it is practiced. To narrate this show effectively is to support the action, and add a touch of spice to it, while not getting in the way of it. Andrea Ogg walked the line.

A veteran of the Spokane theatre scene, David Hardie brings his considerable talents to the role of Riff Raff. He acts as a guide to Brad and Janet, and displays an odd and interesting relationship with his sister Magenta. There is a lot to like in the role and a lot to like in Mr. Hardie’s portrayal.

Smaller supporting roles include Joey Chapman (Rocky), Gabrielle Mehlman (Columbia), and Ellen Dessler Smith (Magenta). What a wonderful time these actors are having, and each role is vital to the success that this show is going to be throughout its run. Mr. Chapman’s “Rocky” is particularly adept. An audience members eyes will drift during a show such as this one. The audience knows if the upstage is bored while the downstage performs a featured bit. Drama in the Hood did not see a moment of drifting eyes or scattered attention during our time of peering into the recesses of the stage. Well done, by all.

Matthew Manguso, Alex Sanso, Phillipa Myler, Laura Sposato, and Emma Cady make up the phantoms. Occasionally, a theatre review will say the beginning of a show, or the latter half of the show, was the strongest for one or more performers. The phantoms were at their best just before the show. You’ll see what we mean when you head for the Island and a night to remember with BPA.

Bainbridge Performing Arts almost always adds value to its shows with the small band accompaniments. “The Rocky Horror Show ” needs its music and Mr. Sanders and the Sonic Transducers are more than up to the task. The music supports the action and is a great listen on its own.

Bainbridge Performing Arts is well-known by Drama in the Hood readers as a theatre that has its production values buttoned-down to the nth degree. Unfortunately, there were some sound issues the night we were there. That said, we cannot be more confident that these will be ironed out in time for this Friday and every show thereafter. You can take that to the bank. In truth, sometimes we say such a thing with crossed fingers and hope in our heart. None of that is necessary this time, because the staff and management at BPA will not allow it to be so. Go see “Rocky Horror,” and expect a night of amusement, liberally spiced with amazement. A rich reward awaits. Sequins, too.