Citori Luecht and Gary Fetterplace in BPA’s “As You Like It.”

“The way it ought to be.” It’s an expression used for everything from baseball without the abominable Designated Hitter, to driving to the beach with the top down. “The way it ought to be” is the feeling you get when your plans click into place and the Universe smiles. That’s what Shakespeare played outside is for lovers of the Bard of Avon. His shows were meant to be cavorting spectacles of mayhem and arch double entendre’. Give fine actors room to prance and they will bring W.S. back to life 303 years after his passing (which, sadly, occurred on his birthday). The Bard at Bloedel is Bainbridge Performing Arts’ annual celebration of Shakespeare the way he ought to be performed. The pastoral setting at the Bloedel Reserve, with birds chirping (okay there were two planes, but work with me here) and the sun setting made for a perfect evening with “As You Like It,” one of the icons more light-hearted works.

Do you go to drag shows? Not your cup of tea? Do you like Shakespeare? Well, then you do like drag shows. So many Shakespearian works involve men dressing as women and vice versa. So it is in this show about couples destined to end up in each other’s arms. The plot is actually quite slight, but Bainbridge’s cast made the most of the comedy and turned in a splendid show. Director Kristi Ann Jacobson, one of the South Sound’s premier scholars when it comes to Shakespeare, chose her cast carefully and well.

For example, Gavin Michaels as Orlando was an excellent choice. His open face and wide-eyed expressions show the people in the back corners of the crowd that he is in love, in pain, pensive, or jocular. As one of the story leads, Mr. Michaels carries one of the heaviest responsibilities in the show and he bears the burden with grace and talent.

Citori Luecht and Amanda Rae Pease play Celia and Rosalind respectively. On stage together for much of the play they showed pistol-quick timing and excellent stage rapport. Ms. Luecht had a particularly strong first half, while Ms. Pease’s top moments come after intermission. Both young ladies displayed grace throughout and were important reasons why the show worked. Citori Luecht performed extra duty as dance captain for the performance, and her charges were beautifully in tune with each other from a movement standpoint. 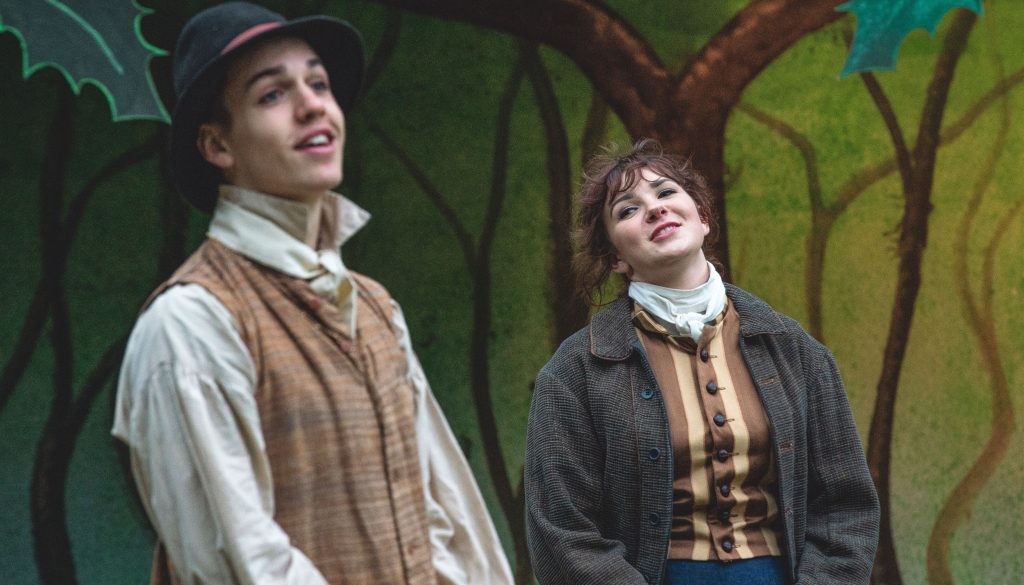 Gavin Michaels and Amanda Rae Pease in BPA’s “As You Like It.” Photos by Derek Villenueva.

Part of the show’s humor came from the relationship between Phebe and Silvius, played respectively by Penny Lukkasson and Jaron Boggs. It is said that there are two kinds of boys in the world, trier boy and quitter boys. Silvius is nothing but a trier boy, in his attempts to woo Phebe. Yes, you knew they would wind up in each other’s arms, but the path to that embrace was fun to watch. Fine performances from both.

Gary Fetterplace is a treasure for Kitsap County theater. With an expressive face that brings to mind screen actor Wallace Shawn (though Mr. Fetterplace is far more handsome, to be sure) his comedy stylings in these Bard at Bloedel outings are a joy to behold. Bainbridge Performing Arts is lucky to snag Mr. Fetterplace from his Board position with Bremerton Community Theatre, and his performance as Touchstone only burnishes his Shakespearian resume’.

This ensemble cast had many fine performances. In a smaller go-around Kristopher Jones’ Oliver was more than effective. However, his role as Fight Captain needs to be acknowledged. It was some of the best stage combat that Drama in the Hood has seen in our four years reviewing South (and Mid) Sound shows, and the best stage combat by far in three years at Bloedel. While I am certain that Oliver and Orlando were not beating the stuffing out of each other, from a distance of 50 feet, it looked as if blows were landing. Excellent work by these two fine actors and superb fight captaincy by Mr. Jones.

Everyone needs an understanding ear and a voice of reason, especially when it comes to being vexed by the toothsome wench you desire (haven’t we all been there, guys?). James Milton in the dual roles of Charles and Corin, provided just that service for Silvius as the latter navigated the sea of love. Mr. Milton has a speaking voice to die for and stage skill, as well.

Costume designer Janessa Styck is due praise for dressing this cast. The wardrobe is period and vintage, but no one looked like a wedding cake on steroids. Drama in the Hood appreciates Shakespeare the most when our vision isn’t assaulted by ruffles, bows, and an eight-foot flounce. Well done.

The Bard at Bloedel is a midsummer treat that all lovers of the genre should consider attending. When a young and energetic cast puts their back and heart into it, attendance becomes darned near mandatory. Make plans to see “As You Like It” soon.