Every theater season brings with it excitement for something new and a chance to revisit old friends in the stories and the characters therein. For this reviewer, two shows on the slate are new, while they are old news to almost everyone else. “You haven’t seen Annie???” “No, not until now.” This weekend, the opening of “Matilda” for Bainbridge Performing Arts elicited much the same reaction and the same “No, not until now.” So, with fresh eyes, I attended the Saturday matinee Opening Weekend and was charmed, amused, and delighted in approximately equal measure. Yes, “Matilda” is another hit for Drama in the Hood’s favorite Kitsap County island-based theater company. We know they will always put on a good show, and this is a great show for Bainbridge Performing Arts.

One wonders whether late at night, Director Ken Michels doubted the wisdom of a 25-person cast, many of them children in the, um lively, stage of life. As it turns out, Michels’ ace in the hole was Choreographer Heather Dawson, who was determined to stage the movement in ways native to the way children move about in the wild. The decision turned out to be a genius one! Some kids can dance, some can march, and others can fall down, so Ms. Dawson took their native talents and wove them into a tapestry of motion that was a joy to behold.

While not as dependent on its lead character as some shows, Matilda certainly works best if there is a competent youngster in the titular role. Enter Olivia Juarez into the BPA stable of actors. Her earnestness, almost painful to watch at times, fits the character like a glove. Matilda’s days and nights are fraught with difficulty, and her furrowed brow tells the tale. How is eleven-year-old Olivia as an actor? One theater-goer wondered aloud if she was able to smile. During the curtain call, Miss Juarez’s smile lit up the room! This lady can be a star, if she chooses to be, whether it is on stage or in her program listed pursuits of soccer, singing, or playing the piano.

The family Gingold is all over this show, and the show is all the better for it. Jason Gingold caught our eye a few years ago in “Big Fish,” and he burnished his resume’ as Black ‘Stache in “Peter and the Starcatcher.” His ability to take a part and turn it, just so much, on its ear is on full display in this show. As Mr. Wormwood (appreciate the nod to “The Screwtape Letters”), Mr. Gingold is comedy gold behind and in front of the curtain.

Molly Hall, the real-life spouse of Jason Gingold, plays the idealistic teacher, Miss Honey. Her performance was both realistic and heart-wrenching. She fights for her charges’ sanity and souls! Ms. Hall is the oil in the machine that is “Matilda: The Musical.”

Sadie Gingold plays Michael Wormwood. It is a small-ish part, but Miss Gingold’s shiniest moments came when she was working with Dad in front of the curtain. Listen carefully, as there are subtlety and nuance in her words. She does a great job.

Kayla Teel plays Matilda’s Mom and completes the family unit that should bring on mandatory parenting classes or Child Protective Services. At her best when singing a song about priorities (“looks are more important than books” was a favorite line), Ms. Teel’s over-the-top characterizations are her stage trademark. She is very well cast in this show, and in everything we have seen.

Justin Wayne Lynn’s Agatha Trunchbull competes with Kayla Teel’s Mrs. Wormwood for voice volume and wins hands down. Thundering and barking about the need for strict discipline and punishment, Ms. Trunchbull takes dead aim at Ms. Hall’s Miss Honey. Their confrontations are some of the best moments in a play with a lot of great moments! 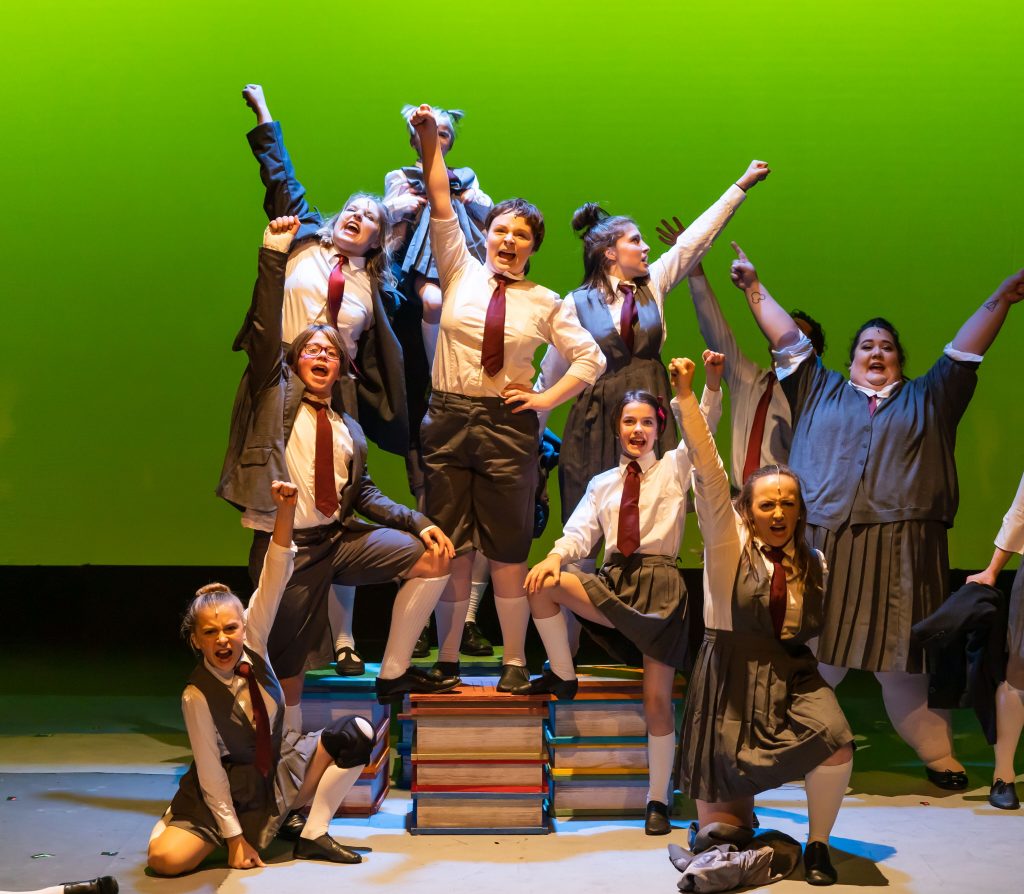 The ensemble cast of “Matilda: The Musical” for Bainbridge Performing Arts. Photos by Alfonso Barrera.

Three members of Matilda’s class at school deserve a quick mention, as well. Olivia Opalski plays Bruce and does an excellent job. Willow Erdman’s Amanda is too cute for words. She hit every cue, as far as we could tell. A fine young actress, that one. Finally, Evelyn Cantwell’s Lavender can’t help but tell us what is about to happen. Likewise, we can’t help but tell you that Miss Cantwell’s stage presence is unsurpassed in her age bracket, and we watch her grow from Mary Poppins’ kite to accomplished young actress with great pleasure.

Finally, has Michelle Abad ever been in a show that she didn’t make better by her presence? That’s rhetorical, because she has not.

Live music is always a plus. Bainbridge puts together one of the finest accompanying orchestras in the area for this show. Kudos to lead keyboardist Josh Anderson and the band he leads through this production. The ladies and gentlemen of the band deserve their own bow.

Likewise, the set prep people and the cast members who change out an awful lot of stage set pieces in a short amount of time. Richart Schug’s scenic design and technical direction were seamless, and Matty McCaslin’s props completed the the Director’s vision.

Though a newbie with Matilda, I was already familiar with Roald Dahl and his off-kilter view of children and adults. “Matilda: The Musical,” (book by Dennis Kelly, music by Tim Minchin), offered another entertaining peek into Dahl’s mind. This cast, supported by the music and stage infrastructure, was outrageously good! This show will do very well for Bainbridge Performing Arts, but don’t allow other people to do that for you. Take a day on the island, smell the holiday smells, and enjoy a show by a theater that produces a hit more often than not. Some shows are already sold out, so be one of the lucky ones who secures a seat.