Paradise Theatre Puts its Own Spin on ‘Addams Family’

From its time as a newborn in the mind of cartoonist Charles Addams to its time in the New Yorker Magazine, “The Addams Family” was a little subversive and a bit counterculture. That’s why it had so many fans. One New Yorker assistant editor once said, “Our circulation would go down 25% if we ever cut The Family.” He was probably correct. Later, as a television show and, of course, animated for television, “The Addams Family” lost some of its edge. It happens when you try to appeal to all people.

Now, as a vehicle of community theatre, show directors have some leeway. They can make it a family show, and it is perfectly fine as one. Or, the director can regain some of its edgy quality from “The Addams Family” as Mr. Addams originally wrote it. That’s the route the folks at Paradise Theatre, and Director Jeff Richards chose to go. The result was a show that bordered on PG-13 for language, at times, but that cut its own lane in the not-empty highway of theatres producing this show.

Inside the chest of every man, beats a corpuscle of blood from Gomez Addams. The lusty Mr. Addams is as in love with his wife as anyone ever has been. At a moment’s notice, he may sweep her up in his arms, dance with her until her legs are weak, or take her upstairs until…his legs are weak. It is a meaty part for any actor and one manned by Michael Drake in this show. Paradise should bottle Michael Drake and seal him like salad dressing. He plays the lead in virtually every show they produce, and is great in every single one! He was earnest in “Lend Me a Tenor,” unhinged in “Frankenstein,” righteously indignant in “Newsies,” and a fine Gomez in this show.

We found his portrayal of Addams to be an interesting one. He isn’t wall-to-wall tics and jerky gestures as some actors play Gomez. As such, the humor isn’t as physically broad as in some shows. But, Michael Drake, as the serious and introspective Gomez was as good as we have seen the part played. That’s something for lovers of theatre to notice when they attend. As usual, Mr. Drake’s singing voice is something for theatre-goers to fully appreciate when they attend.

The object of Gomez’s barely controlled lust is his wife, Morticia. She was played by Carolyn Jones in the television series, who became a template for the role. That’s a blessing and a curse for someone trying to forge their own way in the role. In this show, Katie Jones plays Morticia, and her attitude as Mrs. Addams says she could give two figs for CarolynJones. When Katie Jones folds her arms to make a point the Seahawks’ front seven couldn’t break them apart. What chance would little Carolyn  have?

Katie Jones has a head start on the role since she has legs for miles. Costume designer Vicki Richards put them on full display with dresses slit up the side from here to Transylvania. Everything about the resulting image says this is one Morticia who means business. If Morticia baked banana bread one look from Ms. Jones and bananas would volunteer for the pan. Katie Jones is more than adequate in all phases of on-stage theatre work, and her chemistry with Michael Drake was great!

Troy Turnley and Mary Lou Mills play Fester and Grandma respectively. They are wonderful individually, and especially great when interacting on stage. They share little asides, as family members are wont to do. Mr. Turnley’s best moments were when his Fester was waxing eloquent about the possibilities of love. In the end, when he leaves on a trip, we wanted to wish him Godspeed and requited love. A lifeless celestial body, spinning in dark space, should be so lucky.

Ms. Mills owned the role of Grandma, from vocal nuance to physical portrayal. At least one person in the crowd said that the dinner scene is his favorite. Those are Ms. Mills and Grandma’s finest moments in this show. 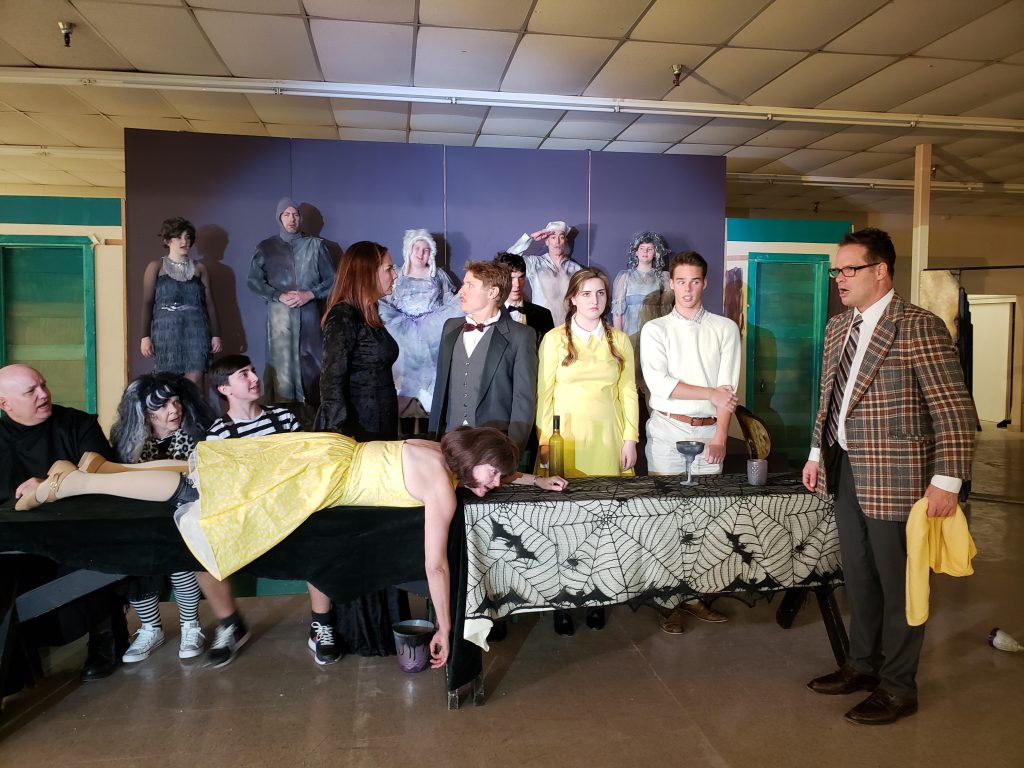 The ensemble cast of “The Addams Family” in rehearsal.

Madelyn Bjorn puts a bow on a great year of theatre with her portrayal of Wednesday Addams. This isn’t an easy role, because the actor must find a sweet spot as someone who could sing, “Why must I be a teenager in love?” and one who is an off-bubble Addams clan member. Ms. Bjorn toes that line with stage expertise that belies her sixteen years of age. Speaking of which, we have to remind ourselves of that when she sings. Madelyn Bjorn is 16, but her singing voice is twenty-five. We know that isn’t possible, yet we stand by the statement, assuming it must be something in Grandma’s potion drawer.

Lukas Brambila plays the Addams’ male offspring Pugsley and plays him with a maniacal glee. Anyone who can sing, “What if she never nails my tongue to the bathroom floor?” and sings it believably is all right by us. Mr. Brambila intends to continue his theatre career and we wish him the best because he has talent.

Micah Kolding looks like he’s having a great time as Lurch, and his performance is very good. We did note, though, that in this production Lurch walks and speaks slowly, but sings and dances at the same pace as the rest of the cast. We would have liked to have seen his lyrics and dance steps reliably twelve bars behind the tune, and losing ground. Those kinds of things are director and choreographer choices, though, and we yield to their expertise.  Mr. Kolding was a valuable part of this show.

The Family Beinecke serves as the Addams’ foils in this show, as Wednesday’s paramour is handsome, young Lucas Beinecke. Played by Paradise Rex Davison, Courtney Turnley, and  Joe Stephens respectively, Mal, Alice, and Lucas Beinecke show up at the Addams’ door and learn some things about themselves over the course of an evening. Everyone knows that the ending will be happy, but the Beineckes add some surprising twists and turns to the show along the way.

Rex Davison is a veteran in the Paradise Theatre stable and has yet to disappoint in any role on any of the various stages this theatre has populated over the last four years. His performances are uniformly sterling, and his Mal Beinecke is a great one indeed. He reacts with appropriate outrage when he finds an unwelcome wrinkle in his wife’s psyche. Yet, he recovers and makes a new future. Mr. Davison checks all the boxes on Mal’s journey through the script.

Courtney Turnley delights Drama in the Hood every time! In the last year, she has played as wide a range of roles, and as wide a range of ages, as any actress in the South Sound. Yet, she is truly believable in every role. As Alice Beinecke, Ms. Turnley is as demure as a Southern Baptist preacher’s wife at a hotdish social…until she isn’t. When it is time for her to chew the scenery she does it with relish, but nothing to drink but Grandma’s potion. Her role isn’t the largest in the show, but if she comes out with a flat performance the show will falter and fail. She will not!

Okay, let’s cut to the chase. Why you may ask, should I see this show when there are glitzier community theatre productions in the South Sound? The answer lies in the opening moments of the show. Ba-d-da-DAH (snap, snap), Ba-da-da-DAH (snap, snap).

Wait! The music may have included the snapping, but I don’t know if it did or not. Because everyone in the crowd Saturday night took it upon themselves to snap their fingers! It was an interactive snapping din. That’s what theatre families do, and the folks who attend Paradise shows are treated like family by this company. The people who come to Paradise shows celebrate the essence of community theatre that, yes, includes chasing the theatre all over west Pierce and east Kitsap County if necessary. The people who come to Paradise shows know that this gang will produce “Annie” in Drama and the Hood’s backyard if necessary. Because the sinew and lifeblood of community theatre says, “Come on, gang. Let’s put on a show.” The fact that Jeff and Vicki Richards, along with a dedicated staff and crew, put on great shows is almost beside the point.

So, come to “The Addams Family”, and support a theatre that will survive and thrive if Drama in the Hood knows anything about people, theatre, and the American Way of pluck and perseverance. That’s one good reason. Another is that, if you fail to attend “The Addams Family,” Morticia may cross her arms and say, “I. Just. Don’t. Know. What.”

Note the address for the production below, and visit the website or call the number below for directions.