Requiem for the End of a Beloved Community Theatre

Did the night seem a little diminished last evening? The expanse of the sky a bit dimmer? The darkness a touch more cloying than usual? It wasn’t your imagination. Paradise Theatre, one of the shining stars of South Sound theatre called it quits this weekend. The causes of death were high costs, locale distress, and coronavirus. A proximate cause of death was the shortsightedness of one town’s city fathers.

Paradise Theatre was one to champion. Where other theatres are well-heeled machines (not all, but some), Paradise was gamely supported by a list of fifty people…but only twenty last names. Surely a welterweight fighting upwards and producing quality heavyweight entertainment and essential theatre education.

Drama in the Hood became acquainted with Paradise when it was operating out of a church setting on Burnham Rd outside Gig Harbor. Shortly after we discovered them, their location became “temporary.” Theatre heads, Jeff and Vicki Richards, scrambled and found a site (pictured above) on Judson Road in Gig Harbor. A temporary one, because the city wanted more prestigious and deeper-pocketed tenants.

Undaunted, at the Judson site, Paradise put on one of the best shows we have seen in five years and 220 shows reviewed. Anyone who saw “Next to Normal” on the Judson Road Paradise stage will not forget the experience. Those who participated in it will never regret their decision.

Run out of town, so that the Judson Road spot could sit empty. (I’m not kidding! It’s zilch empty!) the Richards’ took Paradise Theatre to places the Garmin couldn’t find. Off times infinity Broadway.

It didn’t matter. “The Diary of Anne Frank” came to life for Paradise. The tragic story told with such poignance, brought tears to the eyes of loyal patrons who followed this traveling cavalcade around the Sound. Chairs in three rows around a basketball court? No, it was a cramped attic where Anne told her tale of heartbreak and childlike hope. Another gift from Paradise Theatre to a grateful audience.

While out in the hinterlands, Paradise put on silly shows, too, because laughter and the theatre go together like peas and carrots. “A Taffeta Christmas” showed why the pros are on the stage, and the amateurs are in the audience. “Warren,” told us that, and he’s right.

A theatre with twice the resources of Paradise would have given up, but this is (sorry, was, sadly) no ordinary community theatre. Shut out of West Pierce, the Richards’ gave Kitsap County a try. The Dragonfly Theatre in downtown Port Orchard offered temporary (Yes, that word again.) refuge but no permanence.

That didn’t stop the Richards’ from putting on some outstanding theatre there. When every theatre in the state was producing “Mamma Mia,” Paradise put on a memorable one. “All Shook Up” was another good one at the Dragonfly. 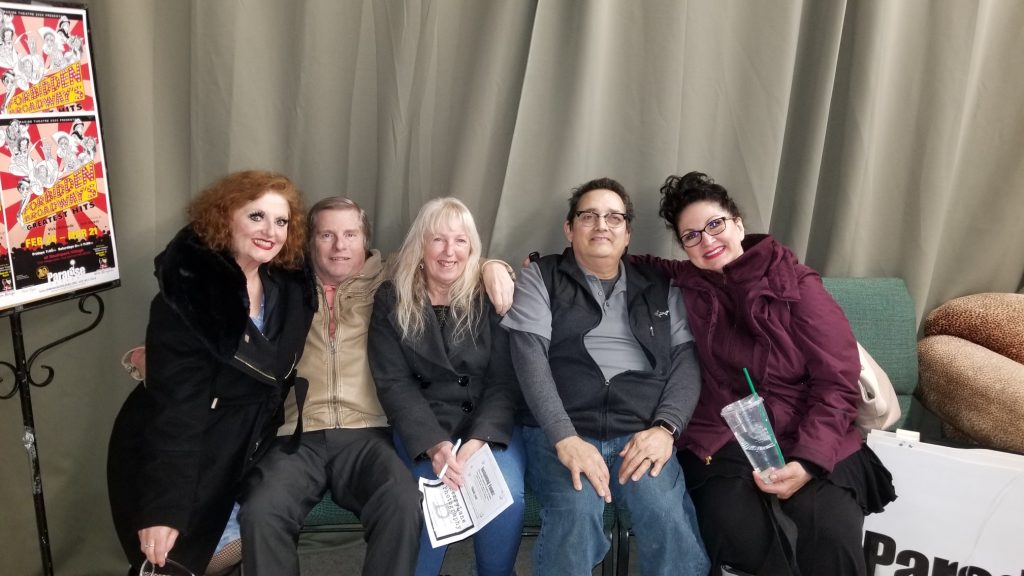 Even then, no one wanted to leave. A few patrons (they are pictured above) sat on chairs and gassed with the Richards’ until eyelids began to flicker.

If you have read this far, you are one who appreciates the lifeblood that community theatre brings to a city. Drama in the Hood has nothing but contempt for a community that chooses another check-cashing store, another pot dispensary, or another Dollar Tree over a community theatre. Frankly, we’re speechless over a city so poorly led to choose an empty storefront over an energetic theatre. Really, we would like to be mad, but mostly we’re just sad about that.

But now, we say a grateful goodbye to the stalwart Richards who so gallantly and graciously led Paradise Theatre to hit shows and great memories for those of us who experienced their brilliance. We will long remember that for a time in our lives, there were memorable shows. We’ll recall the classy people who made them happen. Goodbye, too soon. Paradise Theatre…finis.

‘Barefoot in the Park’ a Classic New Year Show for Paradise
January 16, 2020