Forbidden Broadway’s Greatest Hits is almost 40 years old, having first been performed in 1982. (Can you believe it, kids? That was before Google!) Rather than appearing dated, though, it continues to recreate and update itself as new shows come across The Great White Way. Now, shows like “Wicked,” show up for a lampooning, alongside favorites such as “Cats,” and “Chicago.” Paradise Theatre, a Drama in the Hood favorite for almost five years, opened this show last weekend. It was laugh-out-loud funny, and a walk down Memory Lane in two fast-paced hours.

In a way, Forbidden Broadway’s longevity is a little surprising. Theatre people love to celebrate themselves, but not all of them can laugh at themselves. Perhaps it is this play’s foundation of love for theatre arts that keeps it in motion for all of these years. Also, in a way, that is the Paradise Theatre story. Through obstacles that no theatre should have to weather, it is Paradise’s love for “the play” that has sustained it for 20 years. So, in that same spirit, we celebrate this show and this theatre.

A four-person cast? A show like this requires more actors! After all, who can play a cat, Carol Channing, and Mandy Patinkin in the same show? The superbly talented actor and excellent vocalist Michael Hannenburg can! He belted the tunes and carried off character after character the whole night.

Paradise veteran Eli Ghorley is in his element in this show. Mr. Ghorley can sing well enough and dance acceptably. But his stock in trade is the comedy and has been for years. Eli Ghorley makes the audience aside, and the comedic double-take look easy. They are not, except in the hands of a master at work at his craft. I fear I will never see Les Miz again without noticing that the song is too high. 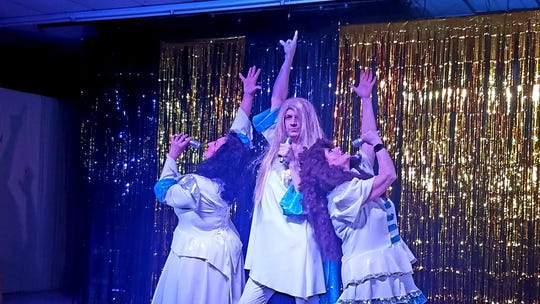 Nita Wilson plies her acting skills all over Kitsap County, and Paradise is always glad to welcome her to another show on another new stage. From a Best Western in Gig Harbor to a former Robes Elegante’ in Port Orchard, she shines on any Paradise Theatre stage. A recent headliner for Paradise in “Mamma Mia,” Ms. Wilson was brilliant in parodying that very show in the title number and in “Dancing Queen.” She’s Forever 17…we can’t all say the same thing. She sings her way into your heart with virtually every tune she attempts in this show.

Shortly after intermission, the crowd was treated to a surprise of surprises! The real Liza Minnelli came on stage! “Did you see her? That was really her! Liza Minnelli!”

No, it wasn’t, but it might as well have been. Vicki Richards, co-founder of Paradise Theatre, Featured Greaser and the real star of Grease 2, appeared on stage. It was as if Judy Garland’s daugh…you knew Liza was Judy Garland’s daugh…Dorothy on Wizard of…yeah, that’s the one…had wandered into Paradise Theatre to do what she does best…whatever that is. Ms. Richards and Nita Wilson tore it up in Chita/Rita for West Side Story, but Judy’s kid was Vicki Richards’ star turn in this show. Liza Minnelli has not been better portrayed since Liza herself had a facelift and was Liza with a Z!

Friends, let’s talk. The news of the world is not only depressing, but now it’s downright deadly. Drama in the Hood recommends at least one dose of Forbidden Broadway’s Greatest Hits from the hardest-working theatre company northwest of the Narrows Bridge. You will not regret it.

‘Barefoot in the Park’ a Classic New Year Show for Paradise
January 16, 2020