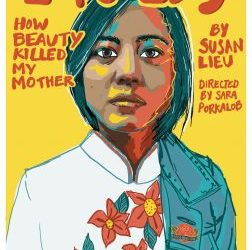 A standing ovation is a social phenomena one often feels obligated to join, but in the case of 140 LBS at Theatre of Jackson, the entire (sold-out) audience was genuinely and enthusiastically on their feet for a performance that easily merited several more minutes of applause.

Directed by Sara Porkalob, 140 LBS is performed in its entirety by Susan Lieu who has workshoped the piece over the last sixteen months. Lieu plays ten different characters as she tells the story of losing her mother at the age of eleven due to a botched plastic surgery and her journey to understand her mother’s motivation, despite her family’s objections to her investigation, and eventually, of letting go of her anger.

The one woman performance style seems like it would be ambitious at best and the wrong sort of experimental at worst, but it was seamless and worked to showcase Lieu immense talent for performance. She recalls rage and grief (no pretty movie-star lone tears here) in one moment, and sends her audience into peels of laughter in the next and as difficult as it may be for any actor to portray these emotions, it is even more admirable that Lieu is able to portray her own feelings so strongly, as well as those of her family members. At no point in the show’s seventy-five minutes was it unclear which character Lieu was portraying, even as three or four people conversed.

As Lieu explains early on in her performance, it was only after she went to Harvard for her undergraduate that she learned that her mother’s death was “not just tragic, but complex.” The human brain has four minutes to viably recover from oxygen deprivation, the surgeon that operated on her mother waited fourteen minutes, before calling the paramedics and he had a history of malpractice lawsuits. Lieu’s show is also complicated, it deals with grief, with body image, with the struggles of Vietnamese immigrants, but it is also the story of her family’s love for each other, of acceptance, and a celebration of her culture, both that she learned from her parents and the one she finds for herself.

Don’t worry if you cry, you won’t be the only one. And when you go (you should go), I guarantee you’ll be on your feet wishing you could clap for longer at the end of it.

140 LBS runs at Theatre off Jackson through Wednesday the 20th but Lieu will be taking the show on tour to a variety of cities. More info here.