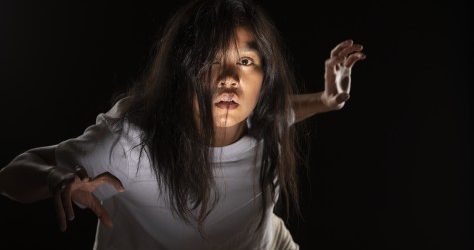 Pork Filled Productions in association with Theatre Off Jackson is currently performing The Brothers Paranormal at Theatre Off Jackson. This is a play by Prince Gomolvilas and this specific production is directed by Mimi Katano. The plot follows two Thai-American brothers, Max and Visarut, launching a ghost-hunting business to capitalize on the trend of “Asian-looking ghosts.” As the siblings investigate the house of an African-American couple who are being haunted by one terrifying spirit, everyone’s ideas of reality, fantasy, and sanity clash against the truth.

This production had the audience at the edge of our seats the entire show. We laughed, cried, and got the creeps. The script weaves together the three genres—comedy, drama, and horror—seamlessly, leaving the audience to experience a rollercoaster of emotions. The director, Mimi Katano, brings to the production a wonderful direction that allowed the play to smoothly show off the emotion of each genre.

All of the actors had their moments to shine and shine they did. Jai, the ghost of the show, is played by Margaret Luxamon Hotchkiss. Margaret’s physicality and demeanor had me at the edge of my seat gripping onto my program. As the ghost of the show, she didn’t disappoint in being scary. Max, one of the brothers, is played by Sean Nguyen. Sean portrays the difficulty of a cultural clash as a second gen kid and trying to relate to his brother and mother who are both first gen immigrants. Delia, the wife who is being haunted, is played by Selena Whitaker-Paquiet. While at times Selena had me laughing, the moments of horror chilled me to the bone and made me forget that it was just a play. Visarut, Max’s older brother, brings to the production, moments of humor and moments of sadness. Tasanee, Visarut and Max’s mother, played by Kathy Hsieh, was hilarious and heart wrenchingly brutal in her monologues about what it’s like to come to America after living in Thailand for the majority of her life. Felix, Delia’s husband, is played by Ronnie Hill. Ronnie’s characterization was so animated and enthralling to watch.

While the acting was superb, the technical aspects of the show added ambiance and a finished polish. I won’t say much about what the technical aspects because I don’t want to spoil the show but be prepared to experience a good scare while seeing the show. The uniqueness in how the set was used was creative and visually amazing.

If you’re a lover of all things horror like I am, this show is a must see—especially in this spooky season, and it’s good and complex enough that seeing it twice would be worth it! Tickets are name your price from $15-$50, but they are a TeenTix partner, so $5 at the door for TeenTix holders. It is important to note that the show is rated PG-14 due to scenes of supernatural horror and discussions of suicide and mental illness.

The Brothers Paranormal by Prince Gomolvilas. Produced by Pork Filled Productions in association with Theatre Off Jackson. At 409 7th Avenue S., Seattle. October 26 to November 16. Thursday-Saturday and Mondays at 7:30 p.m. and Sunday, November 10 at 2:00 p.m. Tickets and more info at www.porkfilled.com or the box office: (206) 486-0375.