Wizard of Oz a Holiday Treat on Bainbridge Island

When L. Frank Baum wrote The Wonderful Wizard of Oz in 1900 he hoped it would become a popular children’s book. Little did he know what was actually in store for Dorothy and her merry pack of friends. The 1939 movie starred Judy Garland and connected her forever with the hit song, “Somewhere Over the Rainbow.” The musical version, with words and music by Harold Arlen and E.Y. Harburg, was written three years after the release of the movie. Though there are many other adaptations, this is the one that most closely adhered to Baum’s vision for his story, though he had passed away in 1919.

“Honey, you are going to play the role and sing the song that made Judy Garland famous. No pressure, go get ’em.” That was 13-year-old Emily Fox’s task, in the role of Dorothy Gale. The best thing about Miss Fox’s performance is what she did not try to do. She decided to be herself rather than reprising Judy Garland’s performance. It was a great choice by this talented young actress and Director Buddy Todd. Almost no one has Judy Garland’s powerhouse voice, but Emily Fox’s sweet and accurate voice was up to the task. She’s a stage pro today and her ceiling as an actor is really high! 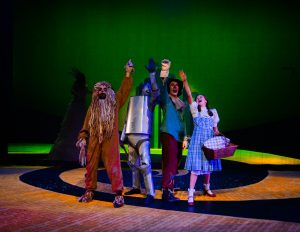 Dorothy’s three traveling partners each brought something special to bear in this production of “The Wizard of Oz.” Jon Payne’s Tin Man was consistent throughout. Shane Patrick Hoffmann’s Scarecrow was a high point in the show’s first act. Matty McCaslin’s Cowardly Lion was all over Act Two. We must admit that we have not heard a Cowardly Lion with an accent so straight out of Brooklyn before, but McCaslin’s Lion was one of the highlights of this show.

Good versus evil. Every good fantasy production for stage or screen has such a conflict and, of course, this show has one, as well. Glinda, The Good Witch, played by Grace Helmcke, floated about the stage casting beauty and joy wherever she could. Ms. Helmcke was good in her part. However, there is much more meat on the bone in the role of The Wicked Witch. Christine Ramhorst Salo chews the scenery with her cackle, and her lines just as she exits the stage are some of the best lines in the show. Kudos to both witches on their performances.

The role of the Wizard can go several different directions. Some Wizards play him like a con man, but Peter Simpson plays his Wizard as an avuncular fellow in this show. “I’m just a guy who found himself behind the weird green thing. Can I help you?” That’s what he seems to say, as his subterfuge is revealed to the crowd. It’s a sweeter portrayal than some we have seen, but we liked it played Mr. Simpson’s way. Also, he was very believable as Professor Marvel.

“Do Pomeranians smile?” That isn’t a random question, since the Pomeranian playing Toto appeared to smile at just the right time. The treats Emily Fox was feeding him might have had something to do with his good humor. He was another good casting choice.

Bainbridge Performing Arts never skimps on set, costume design, or props. They are a top-notch community theater operation that is at the top of their game under the able leadership of Dominique Cantwell. That commitment to stage excellence shines through in the choreography in this show. Angela Snyder’s singers and dancers are fantastic, and deserve kudos and foot rubs as a reward for a good night’s work. Kudos and applause also to The BPA Mainstage Band, sound designer Matt Hadlock, and lighting designer Tess Malone. There are consistently none better at their jobs than Mr. Hadlock and Ms. Malone.

There are several good Holiday shows going on in the South Sound this month. To say that only one should be seen is uncharitable in the season of charity. That said, is there a better evening than a ferry ride to Bainbridge Island, this show, and a return ferry trip home? We can’t think of a better night for whimsy, romance, or a family outing.