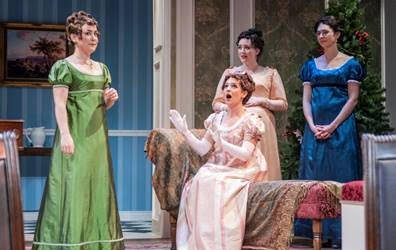 Miss Elizabeth Bennet and Mr. Fitzwilliam Darcy may have gotten their happily ever after some two hundred years ago, but Taproot Theatre has chosen to return to their lives for their holiday production, Miss Bennet: Christmas at Pemberly (written by Lauren Gunderson & Margot Melcon), something for which I at least am grateful for this Thanksgiving weekend.

A sequel of sorts to Pride and Prejudice, the narrative, directed by Karen Lund, focuses on the middle Bennet sister, the awkward, waspish, and scholarly Mary, played by Shanna Allman. She reunites with three of her four sisters at Pemberly, the estate of Mr. and Mrs. Darcy (Brian Pucheu and Hana Lass). Joining them is Arthur De Bourg (Calder Shilling), the recently orphaned and recently landed relative of Darcy. An awkward, Oxford-scholar, he and Mary immediately hit it off. But, the course of true love never did run smooth, especially in an Austenian romance and Mary is forced to let her feelings out by playing some dramatic Beethoven symphonies on the pianoforte, which in 1815, is essentially equivalent to your middle school librarian revealing themselves to be the lead singer in a Rolling Stones cover-band. As Mary finds herself embroiled in the first romantic entanglement of her life, she also has to contend with an more familiar relationship, the difficult one she’s maintained with her much louder sisters.

Miss Benntet is witty, charming, and chock full of some truly fantastic acting. Shilling in particular shows off an impressive emotional range, fully selling everything from humourous social-awkwardness, to heartbreak, to a monologue of self-respect and acceptance that wouldn’t feel out of place in a Shakespearean history. Allman also does a fantastic job, pulling off a character who is funny, endearing, but not necessarily likeable while Pechue perfectly pulls off his role as the notoriously stand-offish Mr. Darcy. His tone of voice never changes throughout the production, but the very best of Austen’s irony is alive in every line he delivers. I would suggest paying attention to the hysterical minutia of his facial expressions as well, his eyebrows deserve to appear in the cast-list in their own right.

The efforts of costume designer Pete Rush must also be recognised. Mary’s evolving emotional state is reflected in her sartorial charges, eventually abandoning her blue colour scheme for a dazzling red gown in the heartwarming final scene of the play. The choice to dress Pechue in a series of cheerfully patterned waistcoats added a fantastic aesthetic juxtaposition to his character’s reserved behaviour.

Running through December 29th, Miss Bennet: Christmas at Pemberly is a fantastically funny success, perfect for the holiday season. Get your tickets soon, I have a feeling they may sell out.

Treat your Family to This Christmas at Taproot
November 28, 2015
© 2023 Drama in the Hood. All rights reserved.
Site Design