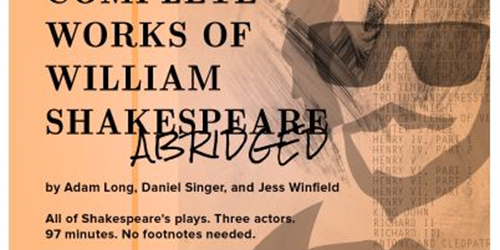 You came to this page to read a review of The Complete Works of William Shakespeare (Abridged), and so you shall. First, though, Drama in the Hood wishes to expound on the subject of community theater in general. We offer this making some assumptions about you. By and large, the folks who visit this page are either:

a) Already a strong supporter of the arts. Otherwise, why would they seek out a critique of a local show?

b) A performer or theater support personnel in their own right

c) A family or a friend of someone in the show which, come to think of it, probably makes them an a) as well as a c)

d) In the cast of this exact show and wishes that I would get on with it so they can see their name. Which I will in a very short moment.

As one of the above, you believe in the arts, perhaps as profoundly as Drama in the Hood believes in the arts. Perhaps you know that community theater in this state is a mixed bag of well-heeled and struggling, at time desperately. More than one theater in the South Sound is in need of an infusion of money to stay afloat. Centerstage Theatre has been, and in truth, still is in need of help to keep going. That’s why it was such a delight to be at Opening Night of “The Complete Works of William Shakespeare (Abridged), at Centerstage. It was a celebration of pluck and hard work by the folks in charge of Centerstage, just as surely as it was a fun night at the theater. The crowd loved it! 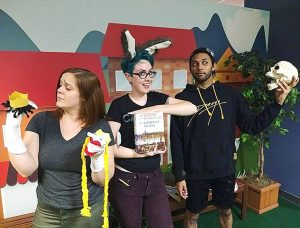 The crowd was also much smaller than these actors and this production team deserved. So, get cracking, folks! The arts need support from the Actor’s Equity level clear down to the high school level. Funding in Washington State schools for theater, music, art, (and, to be fair sports programs too), are weak. Back in the day, Uncle Sam needed you with a finger in your face from a poster on the sidewalk. Centerstage (and the theater in your town) needs you today!

Oh, the show. It was great! Ninety-seven minutes to recap every play and sonnet written by the Bard of Avon. It is a show that displays the immense talents of three different actors, placed in a setting that is interactive and, at times, completely off the chain.

The three actors involved in are a rare treat for a South Sound audience in that this is the local debut for all three. How great is it to have such an influx of talent? The Seattle-area is known for its unique theater opportunities, and these three will have their dance cards full. They worked seamlessly, and none were better than the others in The Complete Works of William Shakespeare (Abridged), because this was a genius ensemble production directed by the nattily-attired Vince Brady.

Laura Peake, Tempest Wisdom, and Joshua Jerard play a million roles in this show and play them superbly, bringing a unique strength to the production. Ms. Wisdom has comedy timing to the back of the theater. Ms. Peake offers a sense of stability to the show, even with some comedic gems of her own. Mr. Jerard’s physical comedy is great to watch. Through the mirth and merriment, each actor shows that they have skills beyond comedy and talent that will take them a long way in this business. The Puget Sound welcomes them and will enjoy them as long as we keep them, but greater things may be in store for this trio of performers.

Highlights of the show are more than one can count, but the send-up of Titus Andronicus was a good one. Julius Caesar another. The (seemingly) impromptu rap routine that the three actors engaged in was great, as well. However, to at least one onlooker, the highlight of the evening came at the very end. No spoiler here, but think “Do it backward!”

Was there anything that could be improved? Precious little. A couple of bobbled lines by one of the actors, but given the number of words they spoke that is both understandable and forgivable. Perhaps 1-2 fewer mock regurgitations into the audience.

Mostly, though, The Complete Works of William Shakespeare (Abridged) is a show to take your mind off what’s going on in the other Washington and celebrate talent and laughter. We all need that, and Centerstage needs you. Synergy? Forsooth. Oh, one more thing. Arrive early, because the seating is GA/Festival and Angela Bayler and Trista Duval do the best two-person curtain talk in the area.

‘Hound of the Baskervilles’ Stylish Drama at Centerstage
October 9, 2019
© 2023 Drama in the Hood. All rights reserved.
Site Design