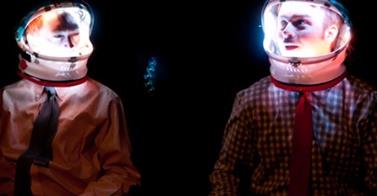 Appealing to Sci-Fi Lovers as well as Sci-Fi Loathes

Arguably the most creative and well-scripted comedy act ever produced in Seattle (or for that matter the world) Moby Alpha played to a full house this weekend at Ballard Underground.

Written and performed by the comedy duo CHARLES PRESENTS ,comprising Chuck Armstrong and Charlie Stockman, Moby Alpha is a sci-fi rendition of Moby Dick by Herman Melville.  It  draws on many Sci-Fi movies and TV series:  2001 a Space Odyssey, Hitchhiker’s Guide to the Galaxy, Red Dwarf as well as the original archetypal “quest-epic”  the Odyssey by Homer.

Using a very clever script with witty references to all the Sci-Fi cults, geeks and the explosion of electronic technology, the two actors were superbly entertaining and had the requisite comic timing to nail every line.   Although vocally and physically both actors were able to play many different characters, they used space helmets with different colored lights to help the audience distinguish them.  This simple device illustrated their creative genius.

*One word of warning.  The pre-show and intermission music was extremely loud and very unpleasant.

is a comedy written and performed by Chuck Armstrong and Charlie Stockman and connects all the archetypal quest epics of Western Literature, beginning with the Odyssey, continuing on to Moby Dick and ending up with all the recent sci-fi cult epics such as Hitchhiker’s Guide to the Galaxy, Red Dwarf, 2001-A Space Odyssey and many more, to create a hilarious spoof of sci-fi, Moby Dick, hipster foodism and just about everything else in the universe.

Even if you generally despise Science Fiction, as I do, preferring Jane Austen and check-lit to Star Wars, this show will delight you and amuse you because after all, it takes the micky out of all sci-fi.