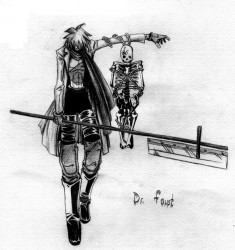 “I am wedded to Satan”

Drawing on one of the most influential and profound legends in European literature, the legend of Dr. Faust, Akropolis Performance Lab has produced Ecce Faustus, Latin for  Behold Faust!!! Directed by Joseph Lavy, and presented at the austere Northminister Presbyterian Church in Ballard, the show opened on Friday.

To do this, AKL stripped away all the theatrical conventions of Western European Theatre for the last 1500 years, and presented this legend in the style in which Western Theatre originated: as a Medieval Mystery Play in a church.    True to the style of authentic Mystery Plays they also added sacred polyphonic music.

The Faust legend, in my opinion,  another expression of the archetype of the Lucifer and Oedipus myths, dates from a German tale Historia von D. Johann Fausten written anonymously in 1587; however there was also an 11th Century tale Cenoduxus by Jacob Bidermann, as well as Polish and Russian tales.

In the 1587 version, Dr. Faust is a talented ambitious magician, who becomes disillusion by his meager successes, causing him to make a bargain with the devil. In exchange for eternal damnation Faust will get power and knowledge in his worldly lifetime.

The various playwrights, novelists, composers and  librettists have varied the exact details of the Faustian legend but the essential message is the same.  The moral is summed up in the Biblical quote:  “What good will it be for a man if he gains the whole world yet forfeits his soul?”  (Mathew 16: 26-27)

The text of Ecce Faustus is a montage of several Faust-themed texts, such as Christopher Marlowe’s The Tragical History of Doctor Faustus, the 1947 novel Doctor Faustus by Nobel Laureate Thomas Mann, The Death of Saint Narcissus by TS Eliot, Thus Spake Sarathustra, and Ecce Homo by Friedrich Nietzsche, Antonin Artaud-the great French Theatre Director, Leonardo da Vinci, Gustave Flaubert’s The Temptation of St. Anthony and of course the Bible. Interestingly, the collator of all this material, Director Joseph Lavy,  did not include any of the actual text of what is considered the most definitive Faust that of Johann Wolfgang von Goethe’s play Faust,  published in 1806.

Interwoven with a cappella singing of Latin and Italian  choral music , by Carolo Gesualdo,  the story of Faust was narrated and acted out on the bare sanctuary of the Northminster Presbyterian Church in Ballard.  A little comic relief was supplied by various narrators who announced with ironic solemnity every so often:  “ A  reading from the book of Faust”

The setting of the play, an austere Calvinistic place of worship, served this production extremely well, as did the austere costumes; black and white with splashes of evocative red.  A truly ensemble cast of Emily Jo Testa, Zhenya Lavy, Annie Paladin, Tyler J. Polumsky, Sara Kaus, Matt Sherrill, Catherine Lavy and Josephy Lavy worked well together as singers, dancers, narrators and actors in  this seemingly innovative yet traditional  moralistic show.

Having only ever read one Medieval Mystery Play, I was glad of the opportunity to see this engrossing play, which had educational value.  I left knowing more about the Faust legend than I had before, and much more about Medieval Mystery Plays.  One of the problems with the Faust legend is that it is just inordinately heavy; however, the director fixed this problem by making the show short-only 75 minutes and interspered the heavy scenes with music and dance.

It was presented “in the round” but I would say that that was the one failing. I did sit behind the sanctuary and although I did not miss anything, I think the show was directed for the audience in front.

For anyone interested in the evolution of Western European theatre, this is a must see; every serious student of theatre should see it because Medieval Mystery plays do not come around very often. Nor do Seattle audiences get to hear such beautiful music.

Also, after seeing this, I have a great urge to read all the other Faust legends.

N.B. Faust means fist in German and there is an old German saying: «Fünf Finger sind keine Faust» “ Five fingers don’t make a fist.” I’m not sure of the relevancy but there must be one.