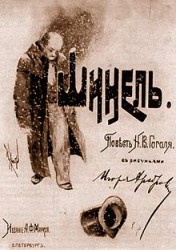 For those of us who love 19th Russian literature, the last few months in Seattle have been a wet dream.   The Seagull Project produced Chekhov’s The Three Sisters at ACT, Theatre Machine produced the seldom seen play The Lower Depths by Maxim Gorky and now Ghost Light Theatricals has thrust us all into the stratosphere of delight with stage adaptations of two short stories, The Nose and The Overcoat, by Gogol.

Ukrainian-born Nikolai Gogol (1809-1852) lived in St. Petersburg after 1828, along with the great Russian poet Pushkin (1799-1837) often referred to as the father of Russian literature, as well as Vissarion Belinsky ( 1811-1818) the highly influential literary critic.  Writing in Russian, he was a master of the short story, and cannot easily be classified into any one literary genre, as he had elements of realism, touches of surrealism as well as  magical realism, but was generally pretty wacky and defied categorization.

One of his favorite themes, present in both these adapted stories was the destructive effects of vanity in petty bureaucrats. At the time, the vast highly autocratic Russian empire was managed and mismanaged by a large bureaucracy.   Gogol had suffered under its capriciousness, having had his appointment to Kiev University blocked by bureaucrats.   The main characters in these two plays are the inverse of each other.

In the first play, The Nose, the vain petty bureaucrat, Kovaylov, is the main character and goes through a highly humiliating and humbling experience until he has a psychological epiphany.   In the second, The Overcoat, a humble governmental official, Akaky,  is the victim of a vain pompous bureaucrat who causes his downfall. The Nose is more easily adapted for the theatre, since it has more drama, a ludicrously funny premise and more intensity.  Kovaylov, the protagonist, was played by Parker Matthews who delivered a brilliant performance and was well supported by the rest of the cast as well as by the exquisite music, by Dana Amromin, as well as a terrific set by Brandon Estrella.

The director, Lucinda Stroud is to be commended for making some very astute decisions.  The pacing kept this show moving right along, the set changes were swift, and were accompanied by well-chosen Russian folk and orchestral pieces.  There were some hilarious touches such as actors pretending to be horses prancing in drozhkys and amusing facial expression from the actors.  The comic timing from the entire ensemble of talented actors was perfection itself.

Although The Overcoat was not as easily staged as it was more somber, nevertheless it delivered a very coherent message about how decisions driven by vanity in the powerful can have lethal consequences for the disenfranchised.  Trish Cosgrove as Akaky in The Overcoat and in her various roles in The Nose, was an extremely talented expressive actor, able to play a man convincingly.

The accepted nomenclature is to say that there was “non-traditional casting”, however that sounds rather out-dated in present day Seattle.  In addition to Ms. Cosgrove playing a man, Patrick Hurlburt also played a Lauren Bacallish prostitute named Larissa as well as a pigeon.  ( cross-species casting?)  To be frank, I was fooled the first time he/she came on stage.  Ronnie Hill, an African American played a barber and a German physician as well as a variety of other roles exceptionally.

Since the show sold out on opening night, it would be wise to buy your tickets now as there are not that many seats.  Ghost Light Theatricals deserves as much applause as they can possible get for bringing such a great literary event to Seattle.  Do Not Miss It. A Gogolplex.