The musical follows the transformation of aspiring earth scientist and geek Melvin Ferd the Third, played perfectly by Brian Lange, into the Toxic Avenger. After exposing the Tromaville mayor Babs Belgoody, played by Ann Cornelius who also plays Melvin’s mother, of dumping toxic waste by the New Jersey Turnpike, Melvin is thrown into a vat of toxic goo and is turned into a superhuman monster stronger than the Hulk, eco-friendlier than Al Gore and greener than both.

But besides saving the world from global warming, Melvin is also out to win over Sarah’s heart, a beautiful blind librarian played by Jessi Little turned on by his dedication to the environment. But when she feels his face, still pink, fleshy and human, she realizes she’s not attracted to him at all. You’d think turning into a huge green monster wouldn’t help the situation but Sarah, being a blind hopeless romantic, takes him as her “Big French Boyfriend.”

Though the show doesn’t seem to have a very big budget, the energy with which the five performers play the multitude of characters more than makes up for it. The stage is nearly always filled with action and every character’s fiery exit, left audience members laughing out loud. Ann Cornelius’ sex-fueled performance of “Hot Toxic Love” left us chuckling and blushing and Jessi Little’s comedic timing brought her blind character into full view.

I also commend Sara Henley-Hicks and Nick Michael Watson who played various characters with ease, from the mayor’s goons to Sarah’s girlfriends, and who at times went through costume changes just to deliver a punchline. And Mr. Watson didn’t look half bad in drag.

The Toxic Avenger is perfect for fans of superhero movies and comedy and I urge you to attend. Make sure you leave home early as parking in Ballard is difficult and the theater itself is hard to find and you don’t want to miss a minute of the show. 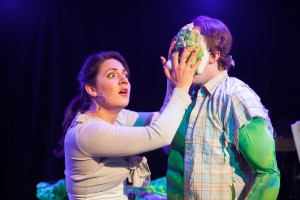 Read other reviews by Enrique Perez