Every writer puts a bit of him or her self into everything that comes from pen or keyboard. You just know that Richard O’Brien exorcised something when he wrote “The Rocky Horror Picture Show.” Nicholas Sparks’ inner sentimental sap is on display in every one of his books. Neil Simon makes no bones about the autobiographical nature of his Eugene Morris Jerome trilogy. “Brighton Beach Memoirs” is based on Simon’s childhood. “Radio Days” comes from Simon’s early days in entertainment. Between those two comes “Biloxi Blues” about Simon’s time in Boot Camp. A Brooklyn boy in the Deep South during World War II is fodder for sociological discussion, mixed with pathos and humor. All are on display in Lakewood Playhouse’s version of the show. It kicked off the Playhouse’s 81st season Friday night in a stylish way.

Making a return performance as Simon’s alter ego, aka Eugene Jerome, is Drew Bates. An award nominee for his performance in the same role in “Brighton Beach Memoirs,” Mr. Bates is particularly adept at the audience aside. That’s important in this role, as a good portion of the dialogue is Jerome interpreting his inner thoughts to the crowd. A bobbled line or two (and a game of hide and seek with the follow spot that was more endearing than distracting) aside, Mr. Bates’ performance was excellent. One can only hope he will return for the inevitable production of “Radio Days.” After two times to the Eugene Jerome post it would be hard to see another actor take over the role.

Lakewood Playhouse Managing Artistic Director John Munn plays Sgt. Toomey in this show. Mr. Munn’s imposing presence is often called upon to embody menacing roles. He was Long Jihn Silver in “Treasure Island.” His role as Harry Roat in ‘Wait Until Dark” haunts some to this day. So, it only makes sense that he plays Toomey in “Biloxi Blues.” His performance is good throughout, but he particularly owned the role in the second act. John Munn is a fine actor, and one Drama in the Hood would like to see in a role that doesn’t rely on physical and emotional intimidation. “John Munn as…George Bailey? Elwood P. Dowd? Ozzie Nelson? A Nick Sparks love interest? Just some thoughts. But, we digress. Mr. Munn is great in this role.

Some of this show’s best moments were in Toomey’s interactions with Arnold Epstein, played by George Blanchard. Private Epstein is not of the military kind, but nor is he a coward. Epstein engages Toomey in a battle of wills that culminates in a scene where this comedy/drama turns decidedly dramatic. It is a powerful moment of brinkmanship that shows Blanchard’s skill as an actor and Munn’s stage generosity as he gives Blanchard room to work. The scene could have gotten tricky, but Director John Olive’s steady hand was on the wheel, and these two actors came together to form a memorable stage moment.

Jerome’s fellow soldiers all had moments to shine. Aaron Mohs-Hale, well-cast as a bit of a cipher to the inquisitive Jerome had several strong moments. He’s a veteran of this stage, and his familiarity with it shows through. Lucas Gomez seethes with pent-up anger in the role of Joseph Wykowski. Travis Martinez hides his inner demons as Roy Selridge. Ethan Penland plays James Hennesey in an understated, and very effective way. Together, the troops play as a well-oiled ensemble, and the themes of anti-Semitism are well-done as a result of this group’s cohesion.

“Biloxi Blues” is salty (see Toomey and Epstein above), but it also sweet, as evidenced by Eugene Jerome’s interaction with women. It’s like Kettle Corn in that way. Of course, Eugene Jerome wants to fall in love. Obviously, it would be nice if he fell in love with the woman to whom he gives his virginity, but when it comes down to it he isn’t all that picky. Like all young men, Eugene Jerome approaches his sexual awakening with anticipation laced with abject terror. The bravado of the awakening male can light a city. The actual confidence of said male couldn’t light a candle. Eugene enlists the help of a professional to help him over, um, the hump. The scene is both funny and evocatively sweet. Devan Malone plays Rowena beautifully, and their scene together is great!

Eugene’s eventual love interest turns out to be Daisy Hannigan, played wonderfully by Cassie Fastabend. Early in the show, Eugene discusses his perfect woman. Included in his list is the desire that she be able to chase the fly balls he hits, and “catch every one.” One gets the impression that Daisy Hannigan could prepare a lovely dinner, and go to the local playground after to run down everything Eugene could hit at her. 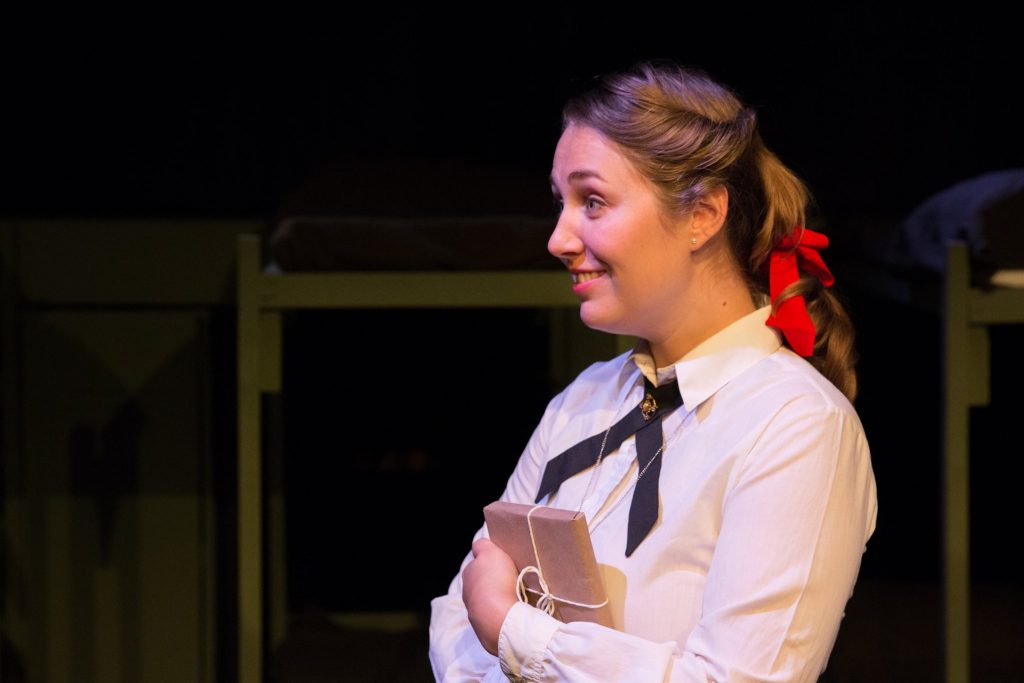 Ms. Fastabend is an accomplished actress, and a local, critical favorite. Director Olive could not have chosen a better Daisy in his casting process. Mr. Bates and Ms. Fastabend may not create a great deal of heat in their interactions, but they portray a couple exploring the outskirts of wartime love with tremendous skill and mutual respect. They are great to watch work together.

Costume designer Thaddeus Isaac and crew did a wonderful job with attire for this show. However, Sgt. Toomey refers a couple of times to an injury he suffered in the war, and yet, he isn’t displaying a Purple Heart. Is there one in the costuming trunk? Perhaps, Sgt. Toomey keeps his Heart in a box. If so, I would have liked for him to say as much. Just a thought.

Finally, we can’t conclude without a nod to Wig Master Jeffrey Weaver for that thing that sits atop Sgt. Toomey’s dome. If a muskrat made love to a Weed Eater…People should come to see this play for that reason alone.

Yes, people should come to see this show, and for a number of reasons. Neil Simon made the best use of the English language since Winston Churchill marshaled it and sent it off to war. It is a pleasure to watch, and listen, to this talented cast use those words the way they were meant to be used. The play itself is great, and the curtain speech by Kyle Sinclair is not to be missed, as well. It was said, in another place, that Kyle Sinclair makes us laugh by showing up. Another good job, sir. For all of these reasons, and more, lovers of community theatre should fill the seats at Lakewood Playhouse. Yes, there is stage competition for the entertainment dollar. Don’t miss out on making sure this show is in the mix.

Skylight-Insightful and Funny
September 17, 2018
© 2022 Drama in the Hood. All rights reserved.
Site Design