‘The Producers” a Classic, Bawdy Romp for Lakewood Playhouse

When a stage play and a movie exist for the same material, most people assume the play came first. Such is not the case for “The Producers,” which was a 1967 movie, adapted into a 2001 play. What the two have in common is the same father. Mel Brooks wrote both the movie and the play, and his hands are all over the material. That’s a good thing if you like broad humor, quick dialogue, and general chaos and mayhem. The Opening Night crowd at Lakewood Playhouse was in an exceptionally good mood, and that is fertile ground for anything from Mel Brooks. The result was an evening of hilarity. It was spiced by some timeliness that brought to mind the news of the day, even as the crowd enjoyed the timelessness of Mr. Brooks’ work.

The basic plot is familiar to most. Two shady theater producers, Max Bialystock and Leo Bloom, plot to raise a ton of dough for a play that they design to flop. Bialystock is familiar with operating on the edge of ethics, and Leo learns quickly. Together they put together the most horrific show they can imagine. It is a song and dance celebration of Adolph Hitler and his Third Reich. A can’t miss failure, right? Well, things never go as planned in Mel Brooks’ world.

Let’s get something out of the way, right now. Chap Wolff (Max Bialystock) should be every theater-lover’s hero right now. With less than a week to go before Opening Night, Mr. Wolff stepped into the role for the injured Brad Cerenzia. Talk about a “the show must go on” moment in time! He could have blown every third line and wet himself and he would get a free pass from Drama in the Hood. But, he didn’t miss a beat! He held a script, but rarely used it until the second act. He treated his script like prop paper that theater producers would carry around with them. After a bit, the crowd didn’t notice the paper. They only noticed that Chap Wolff was owning the hell out of the role! Sir, our hats are off to you.

Brad Cerenzia will do an equally fine job when he dons the Bialystock fedora. DITH saw him in the Rapunzel Panto for Centerstage and enjoyed his work immensely. But, until then, the role is in good hands.

The Leo Bloom role is a tricky one to play, because Leo is Max’s partner, but in a supporting stage role. Director Cas Pruitt could not have scored any better than she did with Will Johnson. His wide-eyes and slight to medium stammer were perfect affectations for an accountant turned shady theater producer. He is toward the beginning of his stage career, and has a bright future before him.

I suppose there is another “get this out of the way” thing in play. Drama in the Hood has no favorites. We are steely-eyed hard-bitten critics of community theater, taking no prisoners (kinda, sorta).  Sooooo, believe us when we say that Kyle Sinclair makes us laugh just by showing up! Mr. Sinclair’s rubber face and limbs bring to mind Inspector Gadget. That’s why we offer wild kudos to him for his role as Franz Liebkind, sycophant to old A.H. himself. Mr. Sinclair took the play from funny to over-the-top the way Mel Brooks intended for it to go. We started by saying he is a favorite. Anyone who loves to laugh will say we have good taste. That said, Kyle Sinclair nearly upstaged by birds? Come to the show and see why. Also, read his insights in his program bio. Wisdom for today’s world.

If you are familiar with Mel Brooks’ comedy you will remember Madeline Kahn. Sexy and funny were her stock in trade in everything from High Anxiety to Wholly Moses to History of the World:Part One. Hayley Ewerz makes her Lakewood Playhouse in this show, as the sexy and funny Ulla. The cast’s best singer, Ms. Ewerz is also blessed with superb comic timing, and dance moves from here to Dancing With the Stars. One hopes this show isn’t a South Sound one-off for the talented Hayley Ewerz, but wherever she plays that company will be lucky to have her.

At intermission, Drama in the Hood took stock of who we wanted to make sure to mention. Him, him, her, him, a couple of ensemble members. Okay, we’re good to go. But, that plan was blown to bits when Henry Talbot Dorset knocked us backward in the second half of the night with his ownership of Roger DeBris. Mr. Dorset is a seasoned pro, and his experience worked to his advantage as DeBris swayed, sashayed, and generally chewed the scenery. Whether the action in The Producers was centered on him or not, Mr. Dorset stayed firmly in character. In fact, some of his funniest moments came as a background character during action-heavy moments on another part of the stage. He was excellent throughout, and a more-than-key element in the second half of the show.

Several members of the large ensemble deserve a critical shout-out. Mark Anthony’s Lakewood Playhouse debut is in this show, and he does a great job in multiple roles. He caught our eye playing a blind man beautifully in an early sequence. Ton Williams always does a great job, and he did so again here. Valerie Ryan Miller stood out in several dance sequences.

But we would be remiss if we did not make special mention, and in her own paragraph, to Betzy J. Miller. As part of an impressive group of ladies with rhythmic walkers she was excellent, but her repeated role as randy Hold-Me-Touch Me (It’s Mel Brooks, folks. The humor is broad.) earned her wild applause and the start of a standing ovation during the curtain call. Ensemble members DO NOT get folks to stand up unless they are relatives, but Ms. Miller earned her kudos all night long! She earned our respect and admiration, as well. Applause and virtual roses from us to you, ma’am. 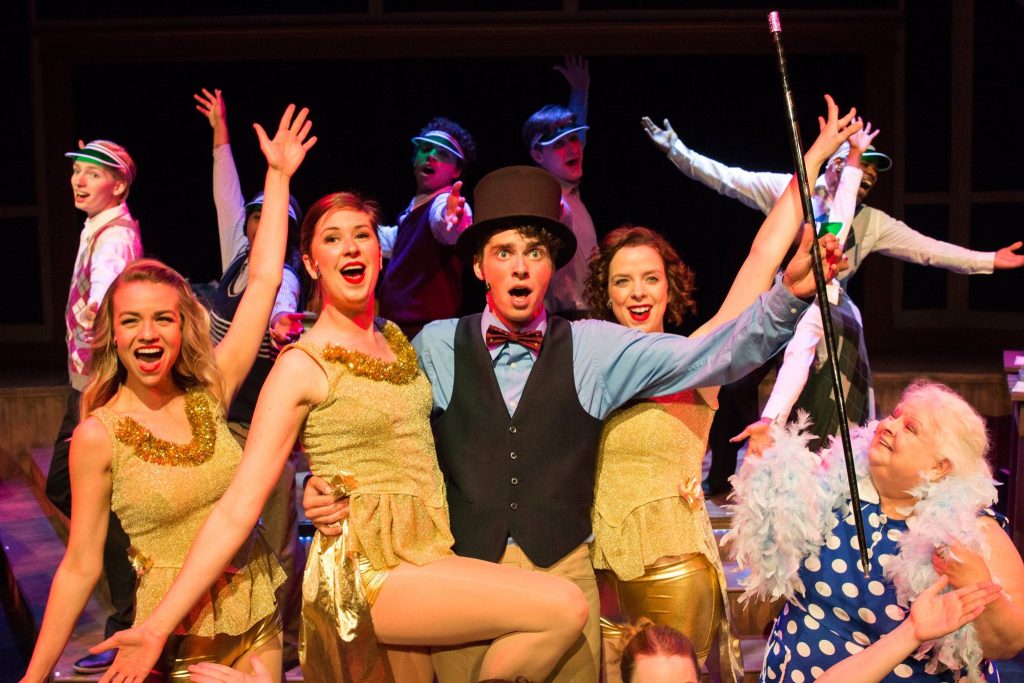 The ensemble cast of “The Producers” (including Betzy J. Miller lower right). Photos by Tim Johnston.

Someone (or more than one someone) told Lakewood Playhouse Managing Artistic Director John Munn that he couldn’t stage a show with the scope of “The Producers” on the small-ish (though bigger than before) Playhouse stage. Nothing gets Mr. Munn’s blood up like that. In fact, he has used the fire in his loins from hearing that to stage “Noises Off,” “Angels in America (Parts One and Two)” and this show. He succeeds every time, partly because of his own leadership, and partly because he hires great people. Choreographer Ashley Roy is great people and she did wonders with this large cast. She, along with Blake York’s construction crew, Aaron Mohs-Hale’s lighting crew, costumer Lauren Wells, sound man Nicolas Rycroft, and Jeffery Weaver, the South Sound’s finest props guy, worked together to bring this show home.

This is the final show of the Lakewood Playhouse season, and the powers-that-be picked a crowd-pleaser to finish off the slate. The first weekend is pretty close to being a sell-out and the remaining run looks like it will play to impressive crowds, as well. That’s why you must get off your (as Mel Brooks would say) tuckus and buy a ticket to The Producers! Material this laugh-inducing by a cast this talented ought not be wasted just because the weather is nice outside! Get online, or on the phone, and buy your ticket so you do not miss out. While you are online or on the phone pick up a season ducat for the 81st season too, because it is an excellent lineup. You will thank us for the reminder next fall. But for now, latch on to entrance to The Producers. Do so today!