The Best Christmas Pageant Ever has had three lives. First, it was a 1971-released book written by Barbara Robinson. Next, it was a 1983 TV movie starring M*A*S*H alum Loretta Swit. The TV movie was nominated for a primetime Emmy. Now it is a community theatre favorite played on stages across the country this time of year. As such, it is a great counterpoint to the more treacly Christmas regulars, such as A Christmas Carol, and The Miracle on 34th Street. Lakewood Playhouse opened The Best Christmas Pageant Ever this weekend to capacity crowds. The full houses were treated to energetic performances by some fine actors. Also, some digestible lessons we could all take to heart.

All the youthful energy could be wasted if not for the steadying hand of two people. First, Director John Munn keeps a lid on the mayhem with a deft touch. To be sure, this is one of the wilder productions of The Best Christmas Pageant Ever that Drama in the Hood has seen. But, Mr. Munn knows when to gently rein in his young colts and fillies. The result is a sense of barely controlled chaos. Parents of more than one child will understand. Second, the role of Grace Bradley, the reluctant pageant director, is a big deal! She must know her way around kids and their more untamed ways. Jefri Ellen Peters is more than up to that task. Her performance is the glue that holds this show together. 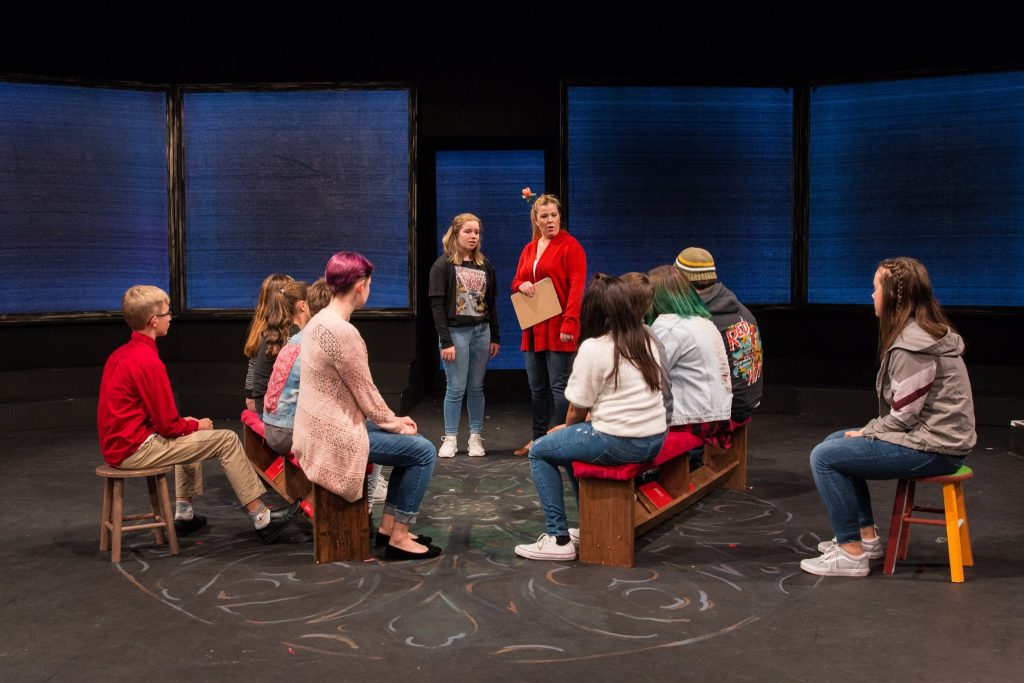 Jefri Peters (Grace) and the Ensemble Cast of the Lakewood Playhouse Production of “The Best Christmas Pageant Ever. Photos by Tim Johnston.

For those who may be unfamiliar, The Best Christmas Pageant Ever is about a Nativity play that goes horribly awry, because some underprivileged kids (The Herdman clan) show up to be in it…and to eat the refreshments that all church gatherings entail. I believe it says in the Good Book, “Where two or more are gathered together, coffee and cookies will be served.” The Herdman children found out about that passage and decided to come to church. Only then, is Mrs. Bradley asked to explain parts of the Biblical Birth Narrative that churched folks take without question. “If Herod wants to kill the baby, why isn’t he in the play?” “How did the shepherds know where to go?” “Shouldn’t the Angel of the Lord say ‘Shazam?” Important questions, such as those.

The Herdman children are uniformly great in this show. Part of the trick for Director Munn was to take the stage training that many of these kids boast, suppress it, and turn them into untamed street kids. How many chances are young thespians given to “run offstage like crazy, yelling your heads off.” Doubtless, long after they go back to being disciplined performers, the actors who play the Herdmans will fondly remember this show. We want to offer kudos to every one of the Herdmans. You all made us smile.

A couple of the Herdman kids stood out from the crowd. Audrey Stowe’s Imogene was well-played. As Mary, Imogene is the Herdman who travels the furthest emotionally throughout the length of the play, and Miss Stowe’s performance was great.

Barrett Stowe’s turn as Ralph (Joseph) was nicely done, as well. We noticed that his look of concern over the newborn Christ-child was very genuine and caring…at least after he learned how to hold the little guy. See first picture above for pre-Jesus holding training.

(Pro-tip, for when you attend this show. Gladys makes her first entrance downstage left {coming from the audience’s right}. Watch her entrance from the time she comes in until she advances toward the center of the stage. You will not be sorry.)

In some ways, the roles played by Connor Wade, Paris Howard, and Jessie Wheeler may seem thankless, but that isn’t the case, at all! They are the “good” kids, tasked with bearing the Herdman’s, instead of sleepwalking through the show within a show. This show wouldn’t work without Connor’s outrage as Charlie, Paris’ attempts to soothe rough waters as Beth, and Jessie’s note-taking tattletale Alice. Some of this show’s best acting was done by these three, and they are a major reason the show works so well.

Finally, at no time this season will the truism “there are no small parts, only small actors” be apter than in the case of Alex Koerger’s Mr. Bradley, and Jenny R. Wilson’s Mrs. McCarthy. Anyone who has served on a committee recognizes the clipped tones and “come at you through the phone” intensity of Mrs. McCarthy. Mr. Koerger’s Bob is long-suffering, but his heart is in the right place, and he loves his family in spite of the annual task they lay before him. Both Alex and Jenny are fine actors. Mr. Munn chose them well and with care.

Here is your to-do list for Lakewood Towne Center. Pick up wrapping paper at Target, and a Panera gift certificate for someone special. Then, buy some tickets to The Best Christmas Pageant Ever at Lakewood Playhouse. It is a lot of fun on the surface and a beautiful story underneath.

Treat your Family to This Christmas at Taproot
November 28, 2015
© 2023 Drama in the Hood. All rights reserved.
Site Design