“Forbidden Broadway’s Greatest Hits” is a movable feast. Originally produced in 1982, the show that spoofs the Great White Way and the shows therein continues to morph into a new entity, taking on new shows as they become popular, then iconic, then (at times) a parody unto themselves. Created and written by Gerard Alessandrini the show lampoons some of Broadway’s most-iconic hits, and many of its iconic actors. Lakewood Playhouse opened the show this weekend to throngs of people who love these shows, but love even more seeing them thrown under the bus in a hail of good humor. You may have laughed harder at the theater, but Drama in the Hood dares to say you have rarely laughed more often.

Here is a question we are often asked about shows such as this one. “Do you have to be a theater insider to enjoy it?”

Not really. While there are moments the actor behind you and three seats to your right will burst into gales of laughter, while the civilians aren’t quite up to speed, these moments are rare. Suffice it to say you don’t need to have inhabited the tattered cloak of Jean Valjean to enjoy watching a character stumble over the words  “Les Miserables” in a parody spoof song. No one should allow their lack of knowledge of the stage to dissuade them from coming to this delight.

Director Alyson Soma knew what she was about in casting this show. Hire some of the brightest lights in South Sound theater and set them free to make a hit! Accompany them with an all-star crew and crack musical accompaniment and make a boffo show! 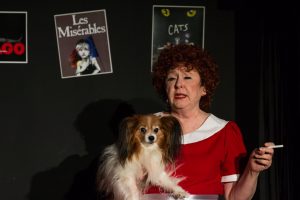 Who is good in this show? Who isn’t? From veterans Michael O’Hara and Sharry O’Hare to newcomer Alexis Dyson, there isn’t a weak link in the lot. Ms. O’Hare’s boozy and chain-smoking “Annie” was, in fact, one of the highlights of the early moments of this show. Daddy Warbucks would be appalled! As for Mr. O’Hara, his Mandy Patinkin was spot on.

To mention Alexis Dyson as a standout newcomer because of her Mamma Mia spoof in no way diminishes the contribution of another newcomer to this stage. Katheryne Elliot has been honored by award-givers in Seattle for years, and she only graduated from high school in 2017! How far can she go? Just about as far as she wants to go. Ms. Elliott’s singing voice is unsurpassed in this show and her comedy timing is superb. You will enjoy her take on “Wicked.”

Not to be outdone in the vocal department is Dawn Padula. When she isn’t bringing the audience at Lakewood Playhouse to their feet  as Barbra Streisand, she’s thrice degreed from universities and colleges around the country. She can wail and is put to good use in this show. 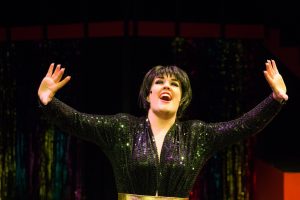 Local favorite Ashley Roy is both show choreographer and a standout performer in several roles over the course of “Forbidden Broadway’s Greatest Hits.” Ms. Roy credits Liza Minnelli as a sort of spirit animal, so it is no surprise that she CRUSHES Ms. Minelli  in her spoof of same. If you don’t already know who gave birth to Liza Minnelli, be assured that Ashley Roy will let you know in hilarious fashion.

Timothy McFarlan’s stage bona fides in this theater are well-established. His comedic takes in everything from “Little Shop” to ” Spamalot” are the stuff of laughter memories. Mr. McFarlan more than pulls his weight and is another excellent addition to Director Soma’s stable of fine performers, but he was best as Cameron Mackintosh.

These performers get out of bed singing, dancing, and running lines. But it would all be for naught without Benjamin Bentler. His accompaniment on piano is a star turn in and of itself. It isn’t easy to fling an arpeggio when a has-been star is mauling your hair.