The Aliens- Not So Alien At All

12th Avenue Arts’ intimate Studio Theatre is an appropriate venue for the small, three-man performance, consisting of realistic, bare-bones conversation and no shortage of long, uncomfortable silences that could easily be swallowed by a larger space. The Aliens takes place entirely in an alleyway behind a Vermont coffee shop, but the events that unfold there occur in any alley or parking lot across America. 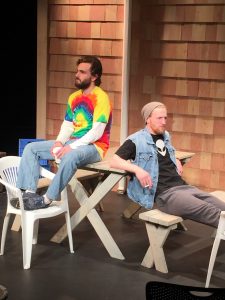 Jasper, played by Curtis Gehlhausen, and KJ, played by Cooper Harris-Turner, are thirtiesh stoners who spend their days hanging out at a picnic table in staff area of a café, playing music, talking about Bukowski, and working through the details of Jasper’s in-progress novel. When seventeen-year-old Evan, Alan E. Garcia, wanders out in his ill-fitting uniform and stutters through a fruitless eviction notice, the two decide to take him under their collective wing. Part coming-of-age story, part exploration of an isolated yet universal fringe culture, and part ode to inexplicable and powerful friendships, The Aliens feels at once original and highly familiar.

Garcia hilariously and convincingly stumbles through the awkward and triumphant firsts of being seventeen, the pride and self-consciousness of the first relationship, the cringeworthy first cigarette. Evan’s growth as he stumbles towards adulthood, learning life-lessons that he will take with him when he wanders back to the society hidden away behind the café exit, is both organic and endearingly relatable.  Gehlhausen brings an emotional depth to would-be cool guy Jasper but does come across as more of a source of development for the other two characters than anything else, despite his own touching story line. It is Harris-Turner who steals the show, both in KJ’s goofy-stoner moments and his painful to watch heartbreak and rapidly revealed emotional depth. His performance inspires laughter, intense empathy, and admiration for the human spirit.

The Aliens is in many ways a subtle play, full of nuances and hidden depths, and all three actors do justice to the profound intricacies that lay underneath dialogue that could otherwise come across as mundane. The deliberately understated set and costuming allows the inner-life of the characters to take the focus of the production. While the first hour of the production does drag on a bit, the powerful second act is well worth the wait

Like many of Baker’s plays, The Aliens requires both focus and patience, but that quickly seems like a bargain price for an engaging, nostalgic, and thought-provoking performance.