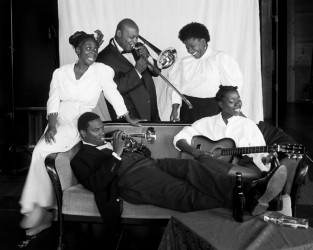 Theater-off-Jackson hosted an evening dedicated to early Jazz musicians; some local to Seattle, and some making history in New Orleans. The first show, upstairs in an art gallery/cabaret was a “Live Installation”, Unsung Heroes of Seattle Jazz, produced by Freehold Theatre in partnership with the Central District Forum for Arts and Ideas and the Mahgany Project, the second was Emboldened, the Rise and Fall of King Bolden the First, an original script by one of Seattle’s most distinguished actors, Reginald André Jackson. King Bolden was actually Charles Buddy Bolden, a Cornetist, often credited with improvising Ragtime to create what came to be known as Jazz in New Orleans.

The most memorable section of the Unsung Heroes was called Jazz Prayer by Sandra Boas-DuPree. It was a hilarious re-enactment of an authentic ( or so they said) Jazz club in Seattle at 23rd and Madison, named Washington Jazz Club, that is to say right across the street from the most established African American Baptist Church, Mt. Zion. ( Well, well, well!!!!)

Two white guys try unsuccessfully to get past the bouncer but the “color-bar” holds fast, except when Kenny a local white Jazz musician from Broadway High School (now Seattle Central College) is welcomed with open arms. An underage singer Ernestine Johnson, played by Felicia Loud, hangs around the bar. Everyone is aware that a raid might come, but the bouncer/MC/owner, being in cahoots with the police, declares that he always gets a call well enough ahead of time to shoo everybody out.

Well, the call comes too late, when the cops come, they apologize for arresting the MC, haul him off to jail, but make a date to all go together to another night-club after he makes bail. It is unclear what the possible grounds for the raid could be, as it is well past the days of prohibition. “Living While Black” perhaps?

I found this piece tantalizing, since I had not realized that Scandinavian Seattle had had such a strong Jazz tradition, and I met an elderly white haired African American lady in the ladies room at intermission, who told me that her grandfather had played at that club.

Emboldened was an extremely ambitious project, containing about four or five story lines and the performance lasted over two and a half-hours. The script was much more suited for a movie than a play as it contained lots of short scenes and tangential information. The two main plots were the life of Charles Buddy Holden, played by Jackson and one of his grown daughters, Frances Bolden, played by Felicia Loud, who desperately needs to discover whether or not there is a recording of her father’s music.

Since Buddy Bolden was born in 1877, and was “King” of New Orleans bands from 1900 to 1907, the only method of recording were cylinders, so a sort of Holy Grail myth surrounds Buddy Bolden that a recoding of his music exists somewhere and many people have attempted to find it.

During her quest, Frances matures as a woman, kicks out her abusive lover and spiritually reconnects with her father.   The great tragedy of Buddy Holden is that although he is considered the “godfather” of what came to be known as Jazz, he had a short career, due to schizophrenia. Unfortunately, at age 30, he was committed to an insane asylum at the height of his artistic genius, where he remained for the rest of his life.

Unfortunately the script was extremely confusing, as the author tried to discuss Buddy’s childhood, the musical evolution of Jazz, Buddy’s family life, his romances, his mental health, his daughter’s domestic violence, as well as the squabbles in the band. The director, Robin Lynn Smith, used multiple casting without differentiating the appearance or vocal qualities of the actors sufficiently, which just added to the confusion.

The short scenes and long epic was better suited to a TV mini-series and the musicology was complicated enough to warrant its own documentary. Theater-off-Jackson is not well suited to a script with several short scenes and the director’s decision to change set pieces and props for every scene slowed it down and accentuated the flaws in the script. At over two and a half hours without a strong dramatic thrust, it lagged,  in spite of the excellent performances of the actors and the superb dialogue.

Structurally the script suffered because there was no real dramatic arc, the character development occurred in a character in the subplot, in Buddy’s daughter, rather than in the main character. For one evening, there were just too many characters, and too much material to cover. However, this was the first performance and Reginald André Jackson as a playwright shows great promise.

The strength of the script was in the dialogue, Jackson can write wonderful dialogue in perfect dialect, which the talented cast of Earl Alexander, Treavor Boykin, Tracy Hughes, Jackson himself, Aishé Keita, Felicia Loud, Richard Sloniker, Kevin Warren and Ahamefuel Oluo handled superbly. The cast were highly energetic with brilliant timing and they nailed the comedy every time. Musically, it couldn’t have been better, with original music by D’Vonne Lewis, accompanied by Ahamefule Oluo on Trumpet and Geoff Cooke and Ev Stern on Bass.

Since known recordings of Bolden’s mostly improvised music exist,  we can only guess what his electrifying music sounded like. But a few of his songs, especially the ones with raunchy lyrics, have been passed down. The band did perform his signature pierce, “Funky Butt” which brought the house down.

Both of these plays have educational value. Historically, the evolution of Jazz is of prime important because it put the U.S. on the international culture map.   Jazz is the only art form invented in the U.S. Like the U.S. it is a fusion of different cultures; African music and European instruments.   It was also invented by the most marginalized class of people in the most marginalized region of the U.S. ( the South)

I would not recommend seeing both shows in one night. I sat down at 7 pm and did not get up until 10:41. Also, the publicity says that it is a Pay What You Can, however, there was sign at the box-office aggressively saying “Suggested Donation $20”.