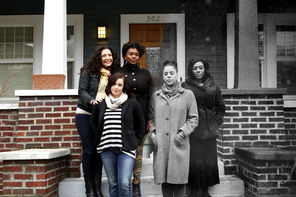 Using  inside jokes only Seattleites would know, favorite Seattle foods, and a knockout cast, local playwright Rachel Atkins and director Jose Amador bring issues – often considered by western mentality to be southern issues predominantly – home to Seattle. “Black Like Us” follows a family secret through three generations of women, highlighting the irrevocable change caused by the Civil Rights Movement on a neighborhood, a generation and the hierarchies of color within the Black community here in the Emerald City.

Maxine, played by Dior Davenport must keep her sister, Florence’s, secret so that she can continue to pass as white, marry who she chooses and live a better life – a possibility accorded by the privilege of having lighter skin.  But as the Civil Right’s Movement sweeps through the country, transforming their neighborhood in the process, Florence must watch as her hidden family gains the same freedoms she passed in order to acquire. Even as her family becomes more free, Maxine touting “Say it loud, I’m Black and I’m proud!” in the department store she was once forbidden to shop in, Florence must continue the archaic practice of passing through the 70’s, 80’s, and 90’s in order to keep her secret. Though Florence, expressively played by Chelsea Binta, is cast as the rogue family member, Atkins makes it clear that right and wrong aren’t so black and white.

The importance of place itself plays a huge role here too. We watch what had been negatively referred to as Coon Hollow in the 50’s morph into what we know today as the Central District. We understand the sarcasm of Maxine’s granddaughters, Tanya and Denise when they comment on the “neutral” territory of Starbucks in Bellevue really feeling like an over-caffeinated warzone for Black folks.

Food also needs mention here. Characters eat on the stage: big juicy bites of Ezell’s Fried Chicken, Krispy Kreme donuts leave powdery traces on granddaughter Amy’s mouth. Her sister Sandra swigs at a full bottle of freshly uncorked wine. Our identification with the food is a base for instant connection with the characters’ experiences, which solidifies as we reflect on our personal relationship with Seattle, its villages, its food, and its colorful people.

The set was flawless, effortlessly changing through generations and years. All of the actresses performed phenomenally but Chelsea Binta and Dior Davenport really nailed it. At the culmination of their relationship, the two do a beautiful scene together. Chelsea’s performance was so heartfelt, I could see the tears pouring from her eyes. These women did a fantastic job.  I am a new fan of them all.

Go watch “Black Like Us” of Brownbox Theatre written by Rachel Atkins and directed by Jose Amador at Annex Theatre on Capitol Hill playing through March 1st. Find tickets and info at www.annextheatre.org.