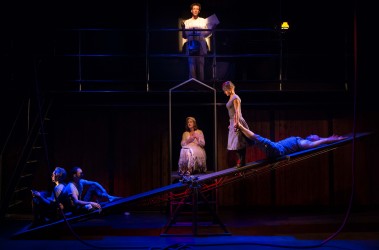 The UMO Ensemble gave themselves the task of discovering the essence of Beckett movement by focusing on his prose. The results are up and running at the ACT Theatre downtown. Written by Maria Glanz and Lyam White and directed by Elizabeth Klob, UMO found the genius both in Beckett and themselves. The mash-up sparkles.

The tiny Eulalie Scandiuzzi Space at ACT works well with performances that do not require much depth for their staging. Thus it was perfect for this show. There is a balcony, and the sounds of a typewriter (thanks to excellent Sound Design by James Bigbee Carter). We find Beckett in the balcony, writing. He reads to us from the preamble of The Unnamable. This preamble sounds like Hamlet’s dilemma speech: first a thought tacks in one direction, then reverses and tacks in another, then, frumps down in exhaustion. And then picks up again and goes on.

Midair is a cage-like perch just big enough for Maria Glanz (the cast is listed as “Cast and Collaborators” without character names and short one performer). She’s represents the Women in Beckett’s Life. She writes as well, but sometimes seems confused whether she writes for herself or is something Beckett has thought up.

On the stage itself is a large teeter-totter, you know, a playground see-saw. Just 10 times bigger (credit Jon Schroeder for set design and construction). On one end, weighing it down, are Janet McAlpin holding Lyam White by his ankles and dragging him towards the center of the see-saw. On the other are Terry Crane and David Godsey—contentedly sitting up in the air. Framing the tableau is a continuous red rope held up by two pulleys.

With that start, the UMO Ensemble shows what makes it tick: balancing and swaying the see-saw, dramatic aerialist performances, comedy routines and theatrical mainstays like monologues, dialogue, singing, and dancing. Janet McAlpin and Terry Crane’s aerialist solos are breathtakingly creative.

For UMO, the movements and the bits serve as the “alphabet” for Beckett performance, and once you understand them you are prepared to combine them in a variety of ways to create the “words” and “sentences” of a full performance. UMO, of course, has far more fun because they are interpreting and extending Beckett and thus are not bound to received criticism or prior historic performances. They, indeed, are in a class of their own.

This show is a fitting close to the Beckett Festival that has run in various theaters around Seattle since August.