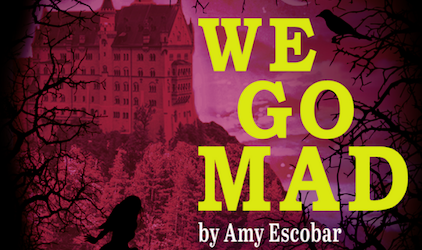 Amy Escobar as writer, co-director, and producer of We Go Mad pivots on family to explore the enduring suffering and yearning to related that cascade down the generations. Using cinematic shadow play, modified bunraku, plus object manipulation, Escobar presents a theatrical case study of a daughter testing the limits of her sanity

An Intimate “Twelfth Night, Or What You Will” at the Slate

Fern Shakespeare Company brings us now an intimate and funny Twelfth Night, Or What You Will at their new home: The Slate Theater. Using the performance method called Original Practice, director Wiley Basho Gorn, set a slow open to the show. The cast enters the stage and casually talk with the audience about everyday matters such as, what brought us out tonight, or how far did we travel. One can ask questions, I asked, “Who are you playing tonight.” I happened to be talking to Camille van Putten: “Viola.” “Oh, you have a lot of lines.” I’m not quite backstage, yet she’s not fully in role either.

My short exchange with an actor sampled the close contact of audience and performer common in Shakespeare’s time.

Tennessee Williams sets a Play in a Bar

The Williams Project Walks into a Bar …

And sets two plays there: Small Craft Warnings by Tennessee Williams and The Time of Your Life by William Saroyan. Same creative team led by director Ryan Guzzo Purcell, and the same actors.

How much can we guess Williams’s intentions from the title: Small Craft Warnings? As far as revealed during the play, none of the characters own a boat.

A Day in the Park with Mock Shakespearean Tales

On Sunday I sat on the lawn by the Asian Art Museum in Volunteer Park to watch the Shakespeare Northwest company’s Once Upon a Shakespearean Tale, written and Directed by Carolyn Travis-Hatch. This show is part of GreenStage’s 2019 Seattle Outdoor Theater Festival. This string of five stories in the style of William Shakespeare, wonders how Billy might have written fairy tales.

Pass Over: Can Young Black Men Escape the Block?

It’s traumatizing being a brother on the block. Playwright Antoinette Nwandu and Director Tim Bond skillfully blur this into a block more like a cell block in prison than a city block one passes through between home and anywhere else one wants to go. Our protagonists in this show at ACT: Moses played by Treavor Lovelle, and Kitch, played by Preston Butler III, are prisoners on this block, kept there by their lack of means to get free. 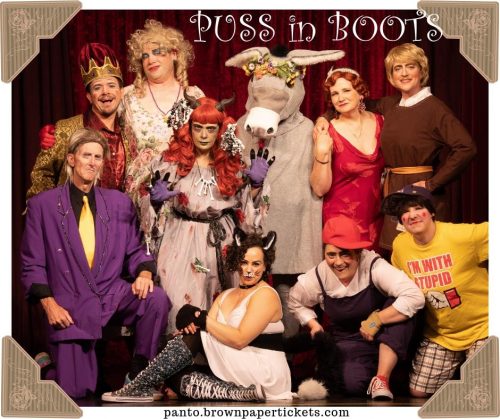 It is rare that a show takes to heart the saying that a performance is incomplete without its audience. In Panto, it’s gospel. You might say “No, it isn’t!” But I answer, “Oh, yes it is!”

The call and response in the first paragraph shows one of the ways the audience joins a panto show as one of the players. At the Fremont Players opening of Puss in Boots, much of the audience, adult and child, came ready and knew what to expect. In England, over the Christmas holiday season you have your pick of dozens of panto productions in towns and cities. Here in Seattle your choice is easy—Puss in Boots. 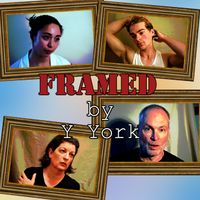 Honesty and Integrity Painted Over in ‘Framed’

On one surface, Framed investigates questions about art: What is art? What is talent? What do you see in a painting? Who makes a work valuable? On another surface this show is about spoiled, foiled, and soiled relationships.
Soon enough, we learn what each desires. Joanie wants her art to be respected and sold in legitimate galleries though she is more poseur than artist; May has natural talent and takes art lessons from Joanie to learn how to draw a particular face; Jake wants to work for Nick; and Nick wants to keep his wife happy, stay married, and a make money booking illegal bets.
In sound human relationships we desire ethics, truthfulness, and honesty. These characters don’t have these virtues so there’s double-crossing, lying, and deceit. What fun!

Find your seat at the Phoenix Theatre in Edmonds and be ready. While Levi Gettleman, the house manager, reminds everyone to silence their devices and buy raffle tickets for a lifetime pair of seats, the show fades in, with busy and intense “Stage Manager” (and Sound Designer) Sarah McGrath urgently flitting about on a set for a 1947 radio comedy, Twist of the Magi (Twist) on pretend station KPTP. The title references the play’s inspiration: O. Henry’s short story The Gift of the Magi.

Henry’s 1905 story had 3 characters, Debra Gettleman’s twist has 20. Henry’s original leaves much to our imagination as he told his tale with just over 2000 words, which had, total, 3 twists in the plot. It takes about 8 minutes to read. Twist, had uncountable twists and takes about 90 minutes. Director Keith Dahlgren clearly respects both radio theater and live theater and finds every mote of humor in Gettleman’s script.

Elizabeth Coplan, Artistic Director of the Grief Dialogues project, has curated this set of six well-crafted 10 minute plays for this evenings play reading. All plays were directed by Wesley Fruge. Interspersed among the plays were poems by Jennifer Coates, Kristin Bryant, and Terry Severhill. A post show song, “Move On,” performed by Carla Rose Fisher accompanied on guitar by her husband Thomas Fisher, followed by Q & A with the audience rounded out the evening.

The value of workshop productions to writers. A new play grows into its final status 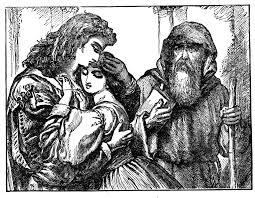 Woodcut of Romeo & Juliet
Past

Romeo and Juliet — The Off Road Version

Off Road Shakespeare’s (ORS) free outdoor production of Romeo and Juliet makes full use of Red Square’s unintended stages. The ensemble performs the play, and the audience sets the cast! Right at 4 PM, Leah Adcock-Starr, director and artistic executive for ORS, playfully yet skillfully gets audience members to step up to the hat of chance […]