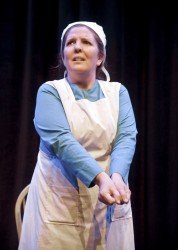 Marianne Savell in The Amish Project at Taproot Theatre. Photo by Erik Stuhaug.

Marianne Savell excels as the sole performer in The Amish Project about the shooting of school girls at the West Nickels Mines School in Lancaster, Pennsylvania on October 2, 2006. Robert Quinlan directs this powerful fictionalized account by Jessica Dickey in the small and intimate Isaac Studio at Taproot Theatre. Isaac Studio is the right space for this, it seats 120 and with a bare set by Mark Lund of a hanging window and a simple wooden chair, it suggest the aggressive “simplicity” of the Amish as understood in our popular imagination.

The facts this play is based on read like yet another tragic school massacre: “On October 2, 2006, a shooting occurred at the West Nickel Mines School, an one-room schoolhouse in the Old Order Amish community of Nickel Mines, a village in Bart Township of Lancaster County, Pennsylvania. Gunman Charles Carl Roberts IV took hostagesand shot ten girls (aged 6–13), killing five, before committing suicide in the schoolhouse.” (Wikipedia)

As The Amish Project fictionalizes this incident, the names are different, and the seven characters Savell represents for us may or may not have much precise resemblance to Roberts, his widow and children or the Amish children and families. The show opens with us meeting Velda, one of the murdered girls, after she is killed as she travels as a spirit over her family’s farm and house. Some of the other characters are Velda’s older sister, Anna, who also is killed, a non-Amish professor who serves as a spokesperson for the Amish community, the killer and his widow, and a pregnant 16 year-old Puerto Rican girl.

The skills of the Production Team and Crew helped to bring dimension and texture to various settings and characters with  changes in the lighting and sound.

The one “fact” that Savell, Quinlan, and Dickey want us appreciate, though, is that the Amish had an immediate and sincere ability to embrace the family of the murderer. They came and sat with his family, bringing food, and established a fund for the family’s benefit when donations began pouring in. And they also forgave the killer.

Because of the Amish community’s striking ability to forgive there’s been several other books and a movie based on the incident. Savell shows us how the Amish were able to express the most spiritual of the 5 types of forgiveness—the type where one—by some amazing grace—forgives unilaterally as a spiritual act. Bring tissues.