The Elixir of Love is Being Poured

On August 6th the renowned Seattle Opera finally lifted its curtain at McCaw Hall with its season opener, Elixir of Love. When one thinks of opera images of tears and heartbreak are often what the mind conjures, but that is certainly not the case with Elixir. This comedy with music by Gaetano Donizetti might be a timeless tale circulating opera stages since the 1800s, but this production of it is making its Seattle debut. For the opera uninitiated and the initiated this light and airy comedy—or rather, opera buffa—is a great way to open opera season. 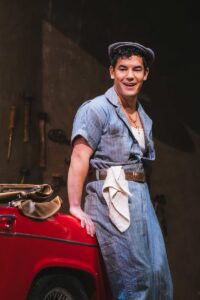 Act 1 begins in what appears to be a small Italian village. As is common for the opera there is a billboard that will act as a testament to the times—1940s here—something for the characters to climb and belt songs on and an ever-changing backdrop. Stage right and stage left had two separate doors serving multiple purposes. The two main leads, Adina and Nemorino (played by Salome Jicia and Andres Acosta, both in their Seattle Opera debuts), spent most of their time on opposite sides of the stage by these doors. Perhaps this was an artistic choice on behalf of director, Stephen Lawless (another Seattle Opera debut), to represent the polarity of the two characters. Jicia with her crystal-clear notes played a ruthless Adina that didn’t believe in going steady or love. Acosta though he was initially a bit hard to hear against the ensemble (could have been technically difficulties as it eventually resolved) played a boyish Nemorino dumbstruck by his love for Adina and willing to do anything to get it. Hence Dulcamara, a smarmy con artist, with an elixir for any ailment.

Act 2 was comprised of one question…what strange things will want love you do? Will you marry someone you don’t love to spite the person you do love? Will you join a war for money? There’s not much believable character development within two and half hours unless one counts falling in love as development. And some of the jokes will be lost on younger audience members, though this may be a non-issue considering the target demographic of opera audience members. But nonetheless, it is entertaining if for no other reason than its music and costumes sweep you into a simpler world. A world where love always wins, and elixirs aren’t little bottles of magic but something more entirely…

If one can suspend their disbelief at the show’s impossible circumstances and allow their selves to get transported by lovely voices harmonizing in Italian they should definitely see Elixir of Love while it still runneth over at the Seattle Opera.