Review-THE FUN AND FANTASY of THE MAGIC FLUTE

You know you’re in for a comic treat of an opera when after an introductory serving of serious music, you’re greeted with the spectacle of a hapless prince being mauled by a dragon. The Magic Flute is a mash-up of genres- part fairy tale, part circus and part religious pageant flouting astronomy and ancient Egypt. Here spectacle reigns supreme. The opera is packed full of sensory overload, with treats for the eyes, ears and the mind too. Seattle Opera’s newest production of The Magic Flute just opened at McCaw Hall at the Seattle Center and will run till May 21st. 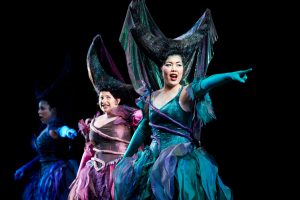 The Magic Flute– is the well cherished comic opera composed by Wolfgang Amadeus Mozart. The libretto (script and melody lines) were written by Emmanuel Schikaneder. The opera was first performed in Vienna in 1791, just a few months before Mozart died. While most of the opera is sung, its’s interspersed with spoken dialog. 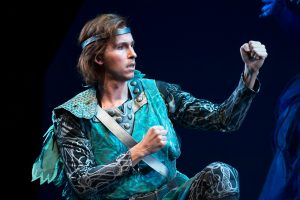 Seattle Opera’s version of The Magic Flute, is performed in German but with English captions provided at the header of the stage. The conductor is Julia Jones, the stage director is Chris Alexander and the costume designer is Zandra Rhodes. 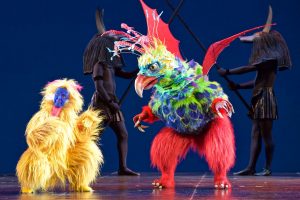 The animals and the Egyptians. Photo Credit Jacob Lucas.

The basic plot outline is this. A proud and power hungry queen plots to overthrow a powerful sun god. The queen convinces a morally upright prince Tamino to rescue her daughter Pamina from the supposedly evil sun god. Prince Tamino is accompanied on his quest by a jovial jokester dressed up as a bird called Papageno. Tamino is given a magic flute which turns sorrow into joy. Papageno is given a set of magic bells to ward off evil. Events take a dramatic turn when the sun god converts Tamino and Pamina into his spiritual order. The queen and her partner in crime, a prison guard called Monostatos are foiled in their evil plans. Both Prince Tamino and the comical Papageno are rewarded for their faith in goodness with love. 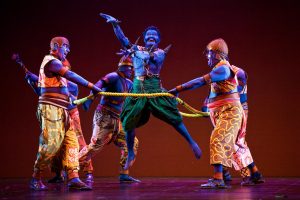 The love story between the princess, Pamina (played by Amanda Forsythe) and her suitor, Tamino (played by Randall Bills) is merely a device to move the plot along. It’s a love at first sight affair and fully secure. With that relationship established, the opera’s focus is on the fantastic circles of action whirling outward from this plot romance.

There’s the haughty, manipulative and vengeful Queen of the Night played supremely well by Christina Poulitsi. The Queen, widowed and without any influence in the world, seeks power by trying to destroy the benevolent and powerful sun god, Sarastro (played by Ante Jerkunica). The queen’s bid for power includes a heinous plot to marry her daughter off to a prison guard- Monostatos (played by Rodell Rosel). The queen plans to secure the guard’s allegiance so he can help in the sun god’s overthrow. The Queen of the Night is one of the most mesmerizing characters. 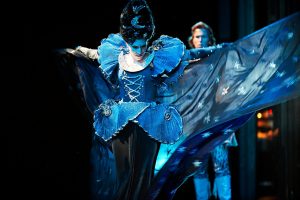 Christina Poulitsi as The Queen of the Night. Photo Credit Philip Newton.

As people say, everyone loves a villain. She might be evil and heartless, pawning off her daughter to pursue power but she is dramatic and entertaining to watch. Everyone will be pleased to know that Christina Poulitsi’s arias are amazing. The arias by the Queen of the Night-“O zittre nicht, mein lieber Sohn” (don’t tremble my dear son) and “Der Hölle Rache kocht in meinem Herzen” (my heart’s boiling with hell’s vengeance), are both very energetic and utilize a dramatic range of notes reaching to exquisite high notes.

Sarastro, even though he’s a good guy, doesn’t disappoint either. As the spiritual leader, he’s regal and commanding in his presence. Ante Jerkunica has a beautiful bass voice and his music booms through the auditorium to great effect. Not only does he deftly command a group of spiritual followers but he is able to guide the three questers, Pamino, Tamina and Papageno out of the dark woods of hate into the fields of love and friendship. 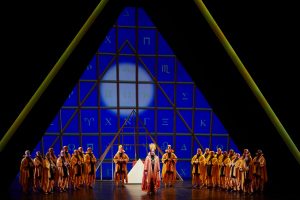 Papageno is the bumbling, lovable bird-shaped clown of the crew. Despite his mistakes, he still manages to get rewarded by the cosmic forces of good because of his essentially positive character. There’s a particularly well-sung and touching duet between Papageno and Pamina. As he relates to Pamina, the strength of prince Tamino’s love and devotion for her, they both muse about the delights and travails of love. The song, “Bei Männern welche Liebe fühlen” (in men who feel love) is very heartfelt. In fact, we get stronger emoting between these friends Papageno and Pamina than we do between the true lovers Tamino and Pamina. While Tamino is played very skillfully and convincingly by Randall Bills, his part is outshone by the character of Papageno. 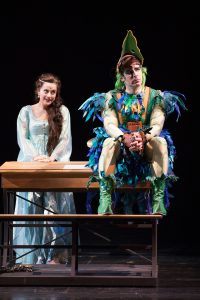 Amanda Forsythe, who plays Pamina, plays her with a sweet force of vitality and strength. She is caught up between the opposing forces of love for her mother, love for her fiancé and allegiance to the virtues as espoused by Sarastro. She manages to elicit the varied emotions of love happiness and despair with her captivating singing.

A special mention must go to the stage and production crew. The costumes by Zandra Rhodes are spectacularly colorful and smartly designed. The costumes are fun but effectively help define each of the characters. The lighting and stage manipulations are technically well done and seamless. I particularly like the way the electronic curtains mimic the shape of the projected pyramids. The use of shadows and see- through screens are delightful to watch as well. This opera as much as it’s a treat for the ears, is visually arresting as well.

Watch out for a few sly additions to the script. The opera emphasizes that instead of hate, slander and fake news; love and friendships should prevail in life.