After a botched sex-change operation, escape from a communist state, and complicated heartbreak, punk rock musician Hedwig Robinson sets out to make a name for herself in this cult classic rock musical now showing at The State Theater in Olympia.

Hedwig and the Angry Inch opened at The State Theater in Olympia on Friday night. Produced by the Harlequin and directed by Aaron Lamb, the musical follows the story of Hedwig Robinson, a punk rocker with a complicated past looking to cash in on her recent brush with fame. The musical, with text by John Cameron Mitchell and music and lyrics by Stephen Trask, was the winner of four 2014 Tony Awards, including Best Musical Revival.

In pursuit of escaping from her communist state home in East Germany, Hansel Schmidt agrees to go under the knife and receive a sex-change operation. However, the operation doesn’t go as planned, and Hansel─ now Hedwig─ is left with an “angry inch” between her legs in lieu of a vagina. Luckily, Hedwig is still able to leave East Germany, and starts a life in Junction City, Kansas as a punk rock musician, eventually recruiting other talent and creating the band, Hedwig and the Angry Inch.

Things become further complicated when Hedwig finds herself at the center of a tabloid scandal with a old flame. 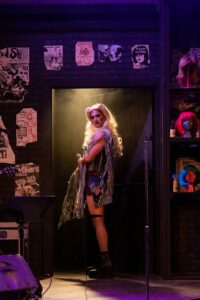 Copying the structure of a rock concert, the show has no intermission. However, the action never seems to dull. Even the quieter moments are executed in compelling fashion. And the musical score goes hard, as well. Hedwig, accompanied by The Angry Inch which consists of pianist Brent Pendleton, guitarist David Broyles, bassist Matt Fearon and drummer Andy Garness, delivered an electrifying rock experience.

The performance of the band was further enhanced by a talented production crew. Donning a revolving array of punk attire─ including a bloody fur coat at one point─ Rennie looked the part of rock star with his fish net leggings, black pump boots and glamorous makeup. The rest of the cast looked equally fitting thanks to the wonderous work of costume, makeup and hair designer Darren Mills and Melanie Ransom, the wardrobe manager.

Hedwig’s dorky sidekick and husband (played by Mandy Rose Nichøls) appeared a little more pirate than musician, but it worked. And if Yitzhak’s costume wasn’t as convincing, the actor’s singing abilities certainly made up for it.

Over the course of the show, both Rennie and Nichøls had opportunities to show off their vocal talents in their respective roles as Hedwig and Yitzhak. Each song was its own memorable experience, but the closing song, “Midnight Radio” shone especially bright and served well as a satisfying conclusion. 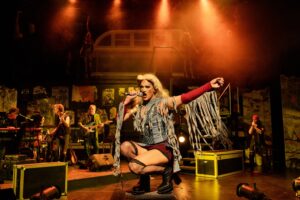 No area of the 212-seat theater was off limits to Hedwig. Rennie commanded the stage and rows beyond the fourth wall, often interacting with guests in a flirty and sensual manner. Even interactions with less eager guests, like an older man who refused to give his name when prompted by Rennie, were amusing but not forced, thanks to Rennie’s quick ability to improvise. “Oh, did your wife force you to come?” Rennie playfully asked the man, immediately reminding the audience what sacrifices one makes for those they love─ a salient theme in the play.

At its climax, the show is intensely beautiful, vulnerable and, of course, punk rock as hell. Punctuated by a riveting light show (courtesy of lighting designer Olivia Burlingame and light board operator Richard Wheeler) that mimics the physicality of being beaten in a dark alley, Hedwig and the Angry Inch strikes hard.  Yet, the production is still fraught with tender moments as Hedwig works to find self-acceptance and the person who might make her soul whole.

In an artistic climate oversaturated with rock star biopics, Hedwig and the Angry Inch stands tall as a beautifully written and heart-pounding show. If you’re looking to experience some of the punk rock ambiance that is historically ingrained in the streets of downtown Olympia, then head over to The State Theater and witness Hedwig and the Angry Inch.

Read other reviews by Aryonna Willoughby

Noises Off—A Hilarious Behind the Scenes Look at Theater
February 9, 2020
© 2023 Drama in the Hood. All rights reserved.
Site Design