Noises Off—A Hilarious Behind the Scenes Look at Theater 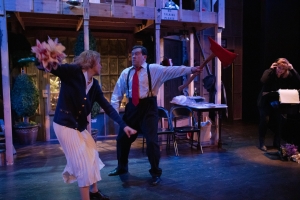 Performing at Harlequin Productions in downtown Olympia is Noises Off! directed by Corey McDaniel. This show takes audience members into the drama of a theater company putting on their own show, Nothing On. A show written by Michael Frayn in 1982. The show had became an instant hit—something that holds true to Harlequin’s production.

The show is three acts. The first act is set at the technical rehearsal at the Grand Theatre. The audience gets to see a rehearsal of Nothing On that is full of missed cues, exits, entrances, and several other issues that thespians are exasperated by during the last rehearsal before opening. It’s seemingly hopeless to believe that the play will be ready to open tomorrow.

The second act shows a Wednesday matinée (a month after the first act). In this act, the audience members get a peek at what happens backstage of a show. We get to see the characters’ relationships with one another deteriorate as they all try to make their entrances on stage at the right time.

The last and third act is the last performance of Nothing On. While in the second act, the actors try to keep their backstage lives off the stage, that is ultimately gone with their last performance. The set is breaking, props are gone, and eventually their play ends in adlib.

Lisa Viertel plays Dotty Otley, a middle-aged television star, who is playing Mrs. Clacket, a cockney housekeeper. Viertel went from playing a housekeeper who only cared about sardines and watching the royal, well, you know, the one where they wear those hats to the leading lady in the show who cares about the production’s success

Jason Haws plays Garry Lejeuene who is the play’s leading man who is dating Dotty. In the shows play, he plays Roger Tramplemain, an estate agent. Haws went from a strong and confident character to a jealous boyfriend of Dottie who isn’t ever able to finish a sentence.

Rebecca Cort plays Brooke Ashton a young and inexperienced actress who is always losing her contacts. Brooke plays Vicki, a woman who works for the tax authorities. Cort lets the character of Brooke bleed through into Vicki because due to inexperience, Brook isn’t the best at acting. She knows her lines and no matter the circumstances, she will continue on with the show, even if everyone else isn’t.

Aaron Lamb plays Freddie Felowes a well-meaning, but dim-witted individual scared of violence and blood. Freddie plays Philip Brent, a man who lives in Spain with his wife in order to avoid paying taxes. Aaron plays a nervous but sweet man who lets his insecurities go when performing as Philip (at least until he sees blood, and someone calls hold).

Alexander Samuels plays Lloyd Dallas the exasperated director of Nothing On. Samuels convincing plays a director who’s had enough and has turned to drink. During the last rehearsal of the show, he doesn’t believe that there will be a show.

Nicholas Main plays Tim Allgood who is the stage manager, understudy for all male parts, and master (and only) carpenter. Main plays Allgood, a sleep deprived technician who makes the production come to life at the expense of his sleep—a relatable experience to technicians who will do anything to make sure the production is a success.

This show is a must see if you’re a lover of theater or if you’re an actor or technical. It allows for a sneak peek into the life of a theater company. While this show (hopefully) isn’t as dramatic as a real company, it has elements that are entirely relatable to thespians that keeps you laughing until the very end. Tickets are $36 for the general audience, $34 for senior/military, and $20 for student/youth.

Recommended ages for this production is 11 and up due to some strong language and mild sexual content. 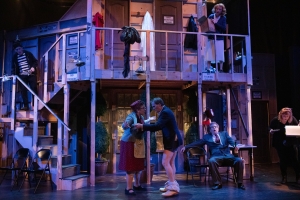 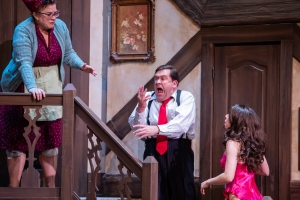 The Highest Tide–An Insight into Olympia
March 8, 2020
© 2023 Drama in the Hood. All rights reserved.
Site Design