‘Heathers: The Musical’ a DARK Comedy for Lakewood Playhouse

The 1989 film thriller “Heathers” had two lives in one. First, it was a relatively successful release from New World Pictures. Later it became a very successful cult classic. Today, the 32-year-old movie (hard to believe) remains a favorite of each new generation, as well as a late-night fave right alongside “Rocky Horror.” A musical version of the movie completed an Off-Broadway run Aug. 4, 2014, and is available to local community theatre operations. Locally, Lakewood Playhouse, never afraid to stage an off-kilter show, opened “Heathers: The Musical” this weekend. Helmed by South Sound bright light Ashley Roy in her directorial debut, this show will make you laugh, squirm, and clap along. But it will also make you think. When those four instincts coalesce, meaningful theatre is sure to follow. Full house crowds are predicted for run. Those full houses are in for quite an experience.

How do you remember high school? People tend to answer that question one of two ways. “Best years of my life,” or “I survived, but that’s about all.” Welcome to Westerburg High, in the fictional town of Sherwood, Ohio. The school is basically run by mindless jocks and self-indulgent beauty queens. Does that sound about right in your experience? Well, you’re in the right place. We’ll deal with the jocks in a second, but first, the beauty queens that are the titular characters of the show. Heather Chandler, Heather McNamara, and Heather Duke run the school like their own personal fiefdom.

Taylor Colvill plays Heather Chandler. Only recently relocated to the Tacoma-area Ms. Colvill more than welcome to our stage(s). She is great as the alpha-snob of the three Heathers. She possesses an excellent singing voice and is probably the best vocalist in a cast of good-to-better-than-good singers.

Juliet Hollifield plays Heather McNamara and is more than up to the task. Her program notes indicate that her friends find her both “arrestingly chaotic,” and “boisterous.” Ms. Holllifield manages to make both characteristics show up at the right moments in this show.

Annelise Martin plays the beset-by-an-eating disorder, Heather Duke. That unfortunate affliction gave some nuance to Ms. Martin’s character. All in all, the three Heathers walked in vapid lockstep. While the uniformity was an important part of the Heather characterizations, it also made them a little hard to tell apart. Drama in the Hood looks forward to seeing each of them in future roles, as they all showed that they could lead shows.

Molly Quinn plays Veronica Sawyer in this show. Fans of the movie remember that Winona Ryder played Veronica in the movie version. Both desperate to be under the protection of the Heathers and appalled at their sociopathic nature, Ms. Quinn’s character is torn by the choices she makes. Her performance is one of the best in the show, as she navigates envy, outrage, and horror in equal measure.

Avery Horton plays the hell out of J.D. Dean and is the top performer in the cast! “Plays the hell out of…” isn’t an expression we readily use, but J.D. is possessed of an evil nature. Mr. Horton recently decided to pursue a career in theatre after dabbling in Computer Science. In our opinion, he chose well and will go far. 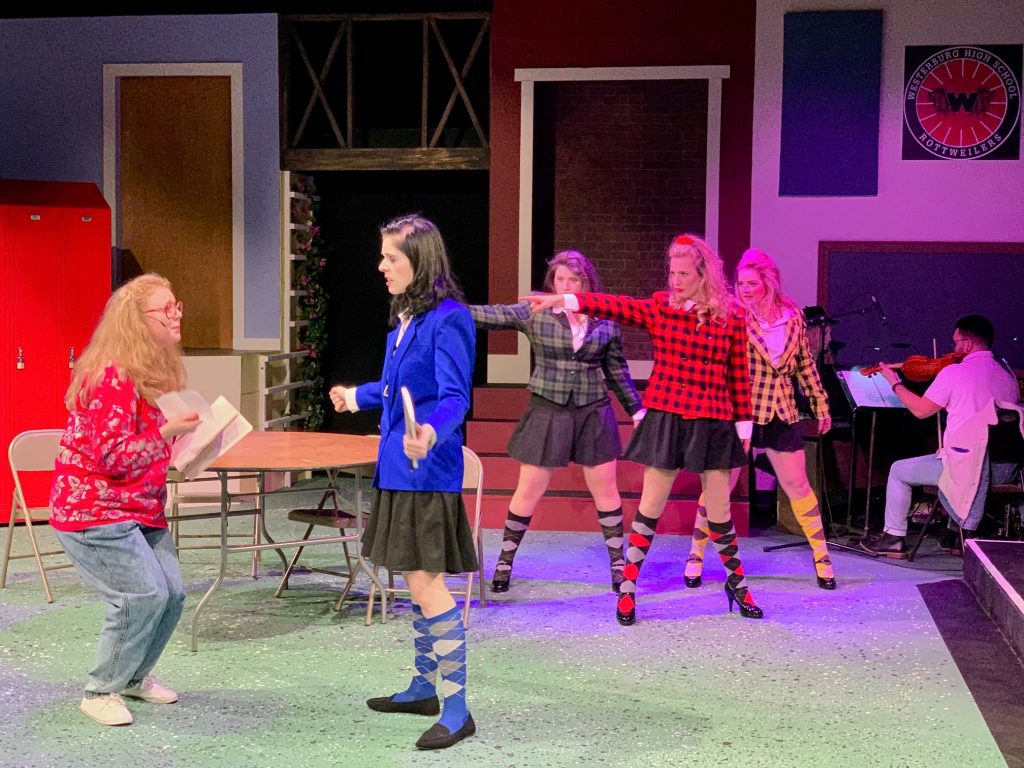 Austin Payne and Henry Temple play Ram Sweeney and Kurt Kelly, respectively. We all knew guys who would probably get married in letterman’s jackets, and these are Westerburg’s candidates for that choice. Since this play hesitates not a bit to indulge in stereotyping, Payne and Temple can expect to be brutish louts. They are that, and they are excellent at it. Times have changed since 1989, and the performance rendered by these two will make the audience uncomfortable. That’s not a bad thing. It just means you have been paying attention in and out of the theatre.

For all of its darkness, there are several laugh out loud moments during “Heathers: The Musical.” One of the best was a raucous rendition of a song about acceptance performed by Eric Strachan and Kyle Murphy. What we learn at the end of the song may surprise us…or it may not surprise us at all.

A live band is value-added no matter the venue. Musical Director Deborah Lynn Armstrong leads the musicians that help this show be the success it is. As for choreographer Heather Covington Malroy, her work expertly helps to realize Ms. Roy’s vision. Movement direction can be a challenge on smaller stages. Ms. Malroy’s overall choreography and John Munn’s fight choreography were superb. Drama in the Hood appreciates good stage combat and, so much the better if it takes place in slow motion…with textbooks! Ah, high school.

Drama in the Hood began with a nod to Lakewood Playhouse’s predilection to off-kilter shows. Who can forget “American Idiot,” and “Angels in America: Parts One and Two,” and those just in the last two years? Both were exhausting for performers and audience members alike. “Heathers: The Musical” doesn’t rise to the level of “Angels…” in terms of angst and exhaustion, but it doesn’t fall far short. That is a credit to everyone connected to this show. More than any other local theatre LPH traffics in edgy and off-beat, at least once a year. Theatre lovers in the South Sound are all the better for it.

If you want to be “all the better for it,” we suggest getting your tickets to “Heathers: The Musical” sooner than later. Word of mouth for this show is as strong as any we have seen in the last few years. We are recommending it for 16 and up, as there is some pretty rough language and Molly Quinn and Avery Horton are very convincing as teenagers in the throes of desperate passion. With that caveat, don’t miss it.

Language Rooms is Riveting and Uncomfortable
April 14, 2019
© 2021 Drama in the Hood. All rights reserved.
Site Design