Although French women were not given the vote until 1946, women played a huge role in the French Revolution of 1789, as active participants in the rioting, in the political clubs and intellectually as authors and salon hostesses. Produced by Theater22, the play The Revolutionists by Lauren Gunderson, which runs in repertory at 12th Ave Arts, deals with four women: Queen Marie Antoinette, wife of Louis XIV the king at the beginning of the revolution, assassin Charlotte Corday, playwright and pamphleteer Olympe de Gouges and a Black free woman from the Caribbean Marianne Angelle, each of whom played roles in the French Revolution, one of the most important events in Western Civilization.

The Revolutionists takes place during the French Revolution, when the country was taking a very sharp and violent turn to the left. The republican Jacobins were gaining power and the more moderate constitutional monarchists, the Girondists, were loosing power. The two most powerful Jacobins were Jean Paul Marat and Maximilien Robespierre, who advocated a bourgeois republic.

As the play opens, playwright and pamphleteer Olympe de Gouges, an independent widow, whose socially progressive works favored the abolition of slavery and other progressive ideas is overcome, at her desk, by writers block. In walks Marianne Angelle , a free Black woman from the French Caribbean colony of St. Domingue (present day Haiti) who has been agitating for the abolition of enslaved people in the French empire.

Although not an historical person, Mme Angelle is a composite of various female Black abolitionists from the French colonies. Her name is highly significant since “Marianne” at the time was a symbol of the revolution and in subsequent years has symbolized support for the Republic (and opposition to the Monarchy) as well as support for democracy and freedom. Marianne vehemently tries to persuade Mme de Gouges to write pamphlets for political causes rather than a play.

After a while Charlotte Corday walks in, explaining that she is planning to stab Marat to death, in his bathtub, to stop the violent and the extreme direction of the revolution. Charlotte wants Mme de Gouges to write her last words, which she plans to speak from the scaffold of the guillotine prior to her execution. Charlotte Corday, the daughter of a minor aristocrat from Normandy, was a Girondist sympathizer, who had previously never taken any active part in the Revolution. Her motivation to kill Marat in order to stop the bloodshed was completely counter-productive. 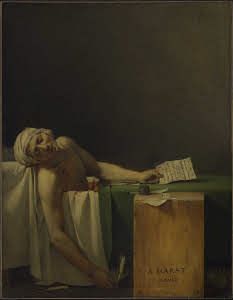 A bit later the former Queen, Marie Antoinette, enters, dressed as if she is still at Versailles, with a sophisticated coiffure, at a time when she was actually being closely guarded in prison. Marie Antoinette played a passive role in fomenting the revolution. The popular press and the pamphleteers focused criticism of the regime on her; whereas in fact, the institutions governing France: absolutism, feudalism and the Catholic church were obsolete and incapable of governing France in the face of Enlightenment ideas and an increasingly large bourgeoisie with political aspirations. 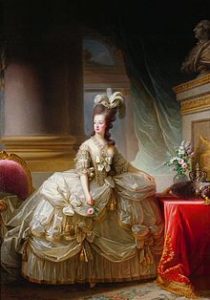 In France, criticism was usually directed at King’s mistresses; however Louis XIV remained faithful, so all the criticism of the regime, as the country plunged into disaster caused by the debt of the Seven Years War, successive bad harvests and the inability of the state to finance itself was laid at the feet of Marie Antoinette, a foreign born Queen. Married at 14 to a stranger, barely educated, although an accomplished musician, crowned Queen at 18, she also ruffled a lot of feathers at the court of Versailles by bucking the rigid social hierarchies, simplifying rituals, challenging dress codes and trying to have some privacy for her family and herself. So in her own way, she was a bit of a rebel.

In the play, in the middle of a lot of chatter, Mme de Gourges writes A Delaration of the Rights of Woman and the Female Citizen, which she reads before the National Assembly to boos and hisses. (N.B. The first Republic was not as reactionary as it may seem, they passed divorce laws which were very liberal in an overwhelmingly Catholic country-these laws were later overturned by Napoleon)

In the play all four women all suffer loss or execution. In history, some were genuine heroines such as Olympe de Gouges and the Marianne Angell’s of the Caribbean; others are footnotes in history-Charlotte Corday and Marie Antoinette. Historical accuracy was not this play’s forte. 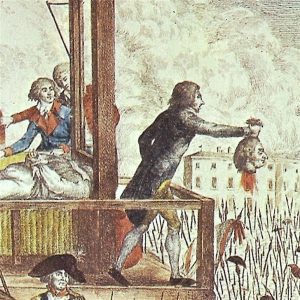 In my opinion, as a play, the script was weak; it lacked character development, a compelling plot and a clear central message. The dialogue used very contemporary, indeed faddish language, full of clichés and hackneyed expressions, which seemed like obnoxious one line jokes. Director Julie Beckman enhanced the weakness of the dialogue by having the actors play the jokes for laughs. so whatever comedy was in the script fell flat. .

The strength of the production was the special effects, by lighting designer Ahren Buhman Sound Designer Maggie Roger and Technical Director Adrian Delahunt whose powerful guillotine scenes were not only inspired but effective.

To say the least, I was very disappointed by this play, as it did not do justice to Mme de Gouges nor to the other highly influential and progressive women at the time

But chacun sa goût as the French would say. Each to his own. Many people did laugh, and enjoyed it so perhaps for some people it is worth seeing. About 80% of the audience cheered at the end, and there was a substantial standing ovation.

WHITE-Hilarious and Enlightening
October 19, 2019
© 2022 Drama in the Hood. All rights reserved.
Site Design