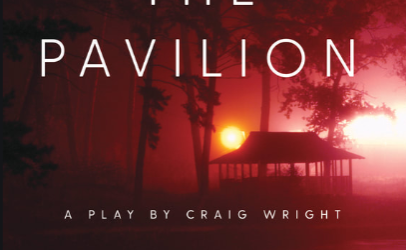 Craig Wright’s The Pavilion, directed by Greg Carter and produced by Strawberry Theatre Workshop, opened at 12th Ave Arts on October 10. The cast only consists of three people: Rob Burgess as The Narrator, Allison Standley as Kari and Quinlan Corbett as Peter. Filled with nostalgia and regrets of high school sweethearts, The Pavilion shows Peter, who is desperate to win back the life he could have had if he had not  left his hometown 20 years ago.

The play begins with The Narrator explaining the beginning of the universe starting with a raindrop, which is not quite the literal universe, as he parallels raindrops with words, and a pool with a mind. As I have never read the play itself, it seemed to me that the universe Craig Wright referring to here is an individual’s mind and the connection people make through communication. Therefore, you are your own universe, your own being. Now, a connection coming from someone special may make that person your whole universe as well. In a sense, two universes collide if they develop a deep relationship between them. Pete, who left the town after wronging Kari, comes to their 20-year high school reunion hoping he could win Kari back, regardless of how Kari is married. Kari has never forgiven him for what he did, as it scarred her whole life. Throughout the play, Pete will try to explain why he did what he did, while Kari does not even want to hear anything from him.

Meanwhile, Rob Burgess plays several other characters, the classmates, aside from The Narrator. While Peter and Kari might seem to have the saddest love story, the other classmates all seem to be having problems in their lives, even though they all seem happy on the outside. The play is fairly realistic, and delivers it blending comic and tragic but not at all dramatically, which really keeps its modern audience hooked. Aside from its comic and tragic nature, the play has some philosophical aspects to it too, that it makes you question certain things about your life or your surroundings. When we near the end of the play, Pete questions if he can restart the universe, but the narrator states it’s impossible, since time only moves in one direction. That reminded me of how we should learn to live with our regrets, since our past makes us who we are today.

The actors were brilliant, I should say. Rob Burgess was excellent at playing multiple characters, regardless of their gender and personalities. Allison Standley skillfully delivered all the anger, frustration and weariness Kari in her life. Quinlan Corbett successfully portrayed Pete’s considerate yet foolish, and to some extent immature character. The stage set is decorated with lights, a worn out roof of a pavilion, few table sets for the high school reunion theme of the play and it does not change throughout the play, as every scene of the play is taking place at the pavilion.

The show will run till November 9 at 12th Ave Arts, 1620 12th Ave, Seattle, WA 98122. Tickets and more information about The Pavilion: https://strawshop.brownpapertickets.com/