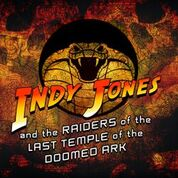 From the comedy writers, who have had Seattle in stitches for decades and the creators of last year’s sell-out super hit A Very Die Hard Christmas, comes a new adaption, Indy Jones and the Raiders of the Last Temple of the Doomed Ark. Sketch writers, from critically acclaimed troupe The Habit, have teamed up with Seattle Public Theater to create a new musical comedy, that is sure to bring a blockbuster to the shores of Green Lake this summer.

Directed by Mark Siano, Indy Jones and the Raiders of the Last Temple of the Doomed Ark is a parody following the story of the original film, peppered with memorable scenes from the second and third films, and is woven together with tons of jokes, witty songs, and clever commentary.

The story is a mashup of the original trilogy (Indy Jones dutifully denies that the Crystal Skull ever happened) with the original film at the thematic center and then peppered with memorable scenes from the second and third films. Indy Jones weaves together jokes, songs, and commentary into a fun night of escapism played out live onstage. Follow Indy Jones and Marion Ravenwood in a race to save humanity from a seemingly unstoppable war machine. They must find and secure the sacred and powerful Ark of the Covenant before the Nazis turn it into a weapon of mass destruction.