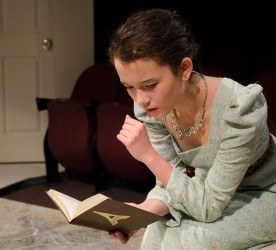 The opening of Tom Stoppard’s 1993 masterpiece, Arcadia, at the Bathhouse on Green Lake signaled the end of Seattle Public Theater’s 2013-2014 season. Finality, though, is hardly the effect that the play produces. Alternating between the early 19th century and present day, Arcadia is largely concerned with the somewhat ambiguous relationship between the past and the present. A minimal but constant set of props and the concurrent intermingling of both the past and present plot lines serve to bridge the gap of nearly two centuries.

The Seattle Public Theater’s production of the play could only be benefited by the Bathhouse’s intimate theater, where I can honestly say that every seat is a good one. This is especially important for a play like Arcadia. As Thomasina and Septimus puzzle over iteration and chaos theory, as Hannah and Bernard explore what turns out to be a false hypothesis about Byron’s personal history, so too do we piece the parts together.

Granted, as the one player “in” on both sides of the story, the audience should be the one entity without questions. However, in a play as complex as Arcadia, it is not surprising that this wasn’t the case; and although the epigrammatic dialogue provoked many laughs, it also prompted some understandably confused faces. With the constant changing of time, the reference to numerous characters—some of which do not appear onstage—and the discussion of hyper-intellectual theories, this confusion is not quite blamable. It is a play that improves, as I heard someone mention on my way out, with a second or third viewing. Even some quick research about the basic plot, I think, would help those who are not already acquainted with the play to enjoy it more fully.

I can’t help but think that with a play like Arcadia—so full of witty one-liners, romance and passion—the actors must have more fun, even, than the audience. Timing and precision is especially important in delivering Stoppard’s clever lines, and director Kelly Kitchen’s cast was well prepared. Several small blunders little affected the effect of the dialogue. Izabel Mar, playing the young, intelligent Thomasina Coverly, is especially deserving of praise. Her accuracy and spirit in the first act of the play was without equal.

Although the play is undoubtedly timeless in its themes, it seems to resonate particularly well in today’s increasing interest in science and technology and decreasing attention to the arts. Valentine’s insistence that personality is trivial and insignificant compared with the progress of science is refuted by Hannah’s observation that “it’s all trivial…It’s wanting to know that makes us matter.” While society is largely “shedding” literature of its importance today, we cannot help but hope that Septimus is right: that “what we let fall will be picked up by those behind” and that “nothing can be lost.”