Even as adults, some people struggle to define their identities and find their place in the world.

But it’s no better as an adolescent, according to talented playwright Allison Gregory, whose breathtaking coming-of-age story Wild Horses debuted to rapturous applause last night at 12th Ave Arts on Capitol Hill.  This one-woman show stars the incomparable Dedra D Woods and is headed by veteran Seattle director Sheila Daniels, who has over twenty years experience working in local theatre.  Produced by Intiman Theatre as their second mainstage production during their ongoing WILD, WICKED, WOKE season, Wild Horses features an all-woman artistic and creative team working tirelessly behind the scenes to provide an unforgettable production focused on a Woman’s reflections of her past.  Faced with youthful rebellion, young love, testable friendships, and struggles with morality, the Woman relates a sympathetic and winding tale of the first sumer she fought to define herself.

Dedra D Woods stars as the Woman, and set many years after the youthful summer experiences in question, she relates the story to the audience from the comfort of a bar in her hometown of Soap, Oregon.  As a child, some of the Woman’s regular antics with her friends Skinny Lynny and Zabby ranged from egging passing cars, to stealing liquor or sneaking out, to driving a car with no prior knowledge of how to properly operate an automobile.  And yet, her summer isn’t all fun and games; at home, the Woman struggles to cope with an abusive father, her knowledge of her mother’s secret affair, and her fourteen year-old sister Carrie Ann’s secret relationship with the twenty-six year-old who lives across the street.

After she’s accused of stealing, the Woman is punished by her father and grounded, though the installment of emergency rope ladders in each of the home’s bedroom windows soon allows the Woman an easy avenue to freedom.  But when the Woman and her friends break into the fenced pasture of a local ranch at night, the accident prone Lynny trips over the body of a dead horse lying in the field, hobbled with wire.  Determining the death of the animal to be no accident, the girls reason the other horses to be in danger from the ranchers and begin hatching a plan to break the horses out.

Their lives only grow more complicated as the summer progresses, with Zabby’s cruel older brother Dean tormenting the girls as frequently as he can.  However, while Dean proves himself an enemy, Zabby’s brother Don-O is a friendly and sympathetic older presence the young women can count on to treat them with respect, and eventually the girls recruit him into their plan.  Finally, on the appointed night, the girl’s gather at Zabby’s house before their heist, only for most everything to go awry, leaving the young women to muster their collective spirit and attempt to save the horses, but not without undertaking great personal risks in the process.

Woods delivers an electric performance, and her easy swagger as she engages the audience and performs the story captivates and entrances.  Even when the specifics of the experiences she relates don’t personally register with audience members, the overall emotion of each moment in question is relatable.  The Woman’s behaviors and emotions prove sympathetic and understandable, and Woods’ antics as she involves scenery into her storytelling is both unexpected and uniquely refreshing to watch.  Unlike other plays, in which the audience sees two actors play off each other in a scene, Woods must act alone, while simultaneously performing the voices and motions of each character in a scene.  As the Woman, she easily flows between the roles of parents, siblings, and friends, talking with the believable authority of a person who lived a life with the people about whom she speaks.

Although the costuming and scenic design for Wild Horses fails to present extravagant clothing or sprawling set pieces, nor would the performance be better with such complex designs.  Costume and scenic designer Jennifer Zeyl dresses Woods’ Woman casually; she wears sandals and sports a jean jacket and scarf, which she quickly removes at the bar counter before elaborating upon the entire summer ordeal, reenacting the motions performed by each of the people in her life that threshold season.

Performed in a black box theatre, the openness of the stage and the overall minimalist set design allow for Woods’ performance to intentionally draw audience attention away from the surrounding set, and instead directs the viewer to focus on the emotional journey undertaken by the Woman and her friends as they engage in all sorts of activities.  Onstage, an aged red cooler is offset to one side while a bar counter and corresponding barstool occupy the center stage. Candles, glasses, and napkins are organized neatly atop the counter, from where the grown Woman sometimes sits and sips her drink as she tells her story. All the while, the skull of a horse dangles ominously above the bar, dimly lit with spotlights in front of a long, midnight blue curtain which hangs from the ceiling.  Additionally, on several occasions, a light, smokey haze filters out from behind the curtain to help establish the atmosphere and setting of several scenes taking place late outdoors. This lack of static distractions on the set only further emphasizes the humanity of Woods’ performance, and her characters’ relatable struggles with identity, loyalty, and love.

Though they serve little functional purpose in lighting the stage, several strings of lights droop from the ceiling, switched off-and-on throughout the show to further alter the atmosphere between scenes, or sometimes during scenes.  Woods herself remains brightly lit throughout the performance, and with little in the way of set pieces onstage, there’s never a moment where the view of the performance is blocked by the set design or hampered by poor lighting.

While those in attendance might recognize the sounds of alternative and indie rock playing before curtain, once the performance actually begins, music from a multitude of varying genres is frequently incorporated.  Each of the songs played during the performance are well-known, hugely popular songs, though each of their uses is short-lived and it can occasionally prove difficult to hear Woods speaking over the background noise of a song, or over laughter from the audience, so it should be noted that people with hearing difficulties may find it a more enjoyable experience to pick seating closer to the stage.

Gregory’s work is a masterpiece of adolescent disobedience and awkward teenage interactions that is sure to elicit both raucous laughter and groans of discomfort from its viewers while reminding them of good times past and mistakes made.  As such, Wild Horses reminds the audience of the reckless emotion with which young people too often spillover, and offers a golden opportunity to retreat into the shared glories and misadventures of our individual childhoods.

Go catch Wild Horses while you still can. 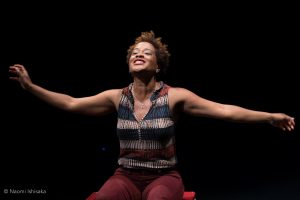