On the heels of Olivia Newton-John’s successful 1978 film debut in “Grease,” along came the movie “Xanadu.” Newton-John was every post-pubescent boy’s pretend girlfriend, and was seen as box office gold dust. Alas, the movie was a critical failure. However, the soundtrack was an international hit, spawning such singles as the title track, “Magic,” and ” Suddenly.” It is the music that keeps the film alive, to the point that it has achieved a measure of cult hit status. It is to that audience community theater companies market the stage version. In fact, two South Sound theaters are opening Douglas Carter Beane’s “Xanadu” over the course of two months. First up, Gig Harbor’s Paradise Theatre opened the show Friday night. Debuting before an enthusiastic audience, “Xanadu” is an awful lot of fun by a theater that deserves good things to happen.

Actors who take on iconic roles are to be admired. No one latches on to the role of Eliza Doolittle without thinking of Audrey Hepburn. Likewise, a community theater Mary Poppins has Julie Andrews in her head. So it is, for the mononymously-named Briana, cast in the Newton-John role of Kira. Briana, however, needn’t worry about comparisons to Olivia Newton-John. Quickly into the show, she owns the performance. A tiny bit shaky vocally in the very early moments, Briana soon settled into the songs with great skill. She easily captures the crown worn by the show’s best singer. Talented, an excellent singer, and cute as can be, Briana’s stage star ascends. 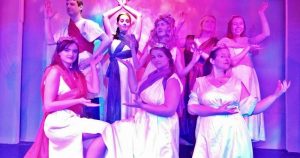 The ensemble cast of “Xanadu.”

Opposite Briana is Will Johnson as Sonny Malone. His task is a difficult one, indeed. Malone is a bit of a doofus, and that isn’t easy to play on-stage. Mr. Johnson carries the role to the audience, sometimes uncomfortably so, but that is part of the fun of “Xanadu.” His voice is adequate, but Director Jeff Richards isn’t asking for Michael Buble’. Will Johnson plays a bemused Sonny Malone very nicely. He’s a man with a dream if he can only get out of his own way. Perhaps his personal muse will be able to help him out. One suspects that will be the case.

Speaking of taking it to the audience, sometimes uncomfortably so, enter Eli Ghorley in the gender-bending roles of Thalia and Eros. Mr. Ghorley is a Paradise Theatre regular. His flair for comedy is golden! Whether creating ethereal wind for Kira’s golden locks or becoming intimately acquainted with a floor level pole, Ghorley always takes it to a squeaky new level. By day he is an aerospace machinist. One wonders if local aircraft are funnier than planes built elsewhere. Eli Ghorley is at home on stage and revels in comedy.

In a show with several dual-casting roles, Courtney Russell and Chelsea Pedro deserve a shout out. Playing a total of four roles, these two are at their best when they are at their worst. Everyone knows a musical theater truism. Namely, light needs darkness. Briana packs the light in this show, but Ms. Russell and Ms. Pedro bring the dark with excellence. This is Courtney Russell’s Paradise Theatre debut and one hopes she returns. Chelsea Pedro received critical acclaim for her role in Sweeney Todd, and will always be welcome at this venue.

Mr. Richards directs this show but, as is his wont, he also designed the sets. Let us be clear. No set designer in the South Sound creates more with less space than does Jeff Richards. His use of visual effect to create the illusion of stage depth is without peer. One wonders what he could do with more space, but more on that in a moment.

The talented Brittany Hess, choreographed “Xanadu” with great skill. Not only is space limited, but much of the action is performed on skates. Kudos to the choreography team, for making it work. Likewise, the work of Amy Knickerbocker with the costuming was accurate. It’s a long look back to 1980. Ms. Knickerbocker and the design team for “Xanadu” had a clear vision.

Could “Xanadu” improve? Yes, the lighting cues will tighten up a little bit as the show ages. The first couple of songs will be attacked more surely as the show ages. That said, this show deserves to play to full houses! In a time when the reality of life is too often unpleasant, “Xanadu” provides a respite and relief.

Paradise Theatre needs more than packed houses, though they make the cast and production staff smile from ear to ear. Paradise is in a race against time to find a permanent home, preferably with a larger stage playground for Jeff Richards. Their capital campaign, “Act Local” is a great way to support community theater across the Narrows Bridge. Community theater lovers support their favorite playhouse with ticket sales AND tangible additional aid. Gig Harbor’s Paradise Theatre deserves no less. At a minmum, though, plan to see “Xanadu.”

A Taffeta Christmas Too Much Fun with Paradise Theatre
November 25, 2018