We all remember “Charlotte’s Web” in a different way. Some of us remember the book read to us as we listened in the post-lunch spring somnolence of 7th Grade. Some of us remember reading the book ourselves, rooting for a pig as we would never root for one again. On the other hand, some remember one of two movie versions. The more famous of the two versions starred the voice talents of Debbie Reynolds and Paul Lynde.

Drama in the Hood remembers all of those ways of experiencing the creative spider and the pig who got lucky, er, got to remain alive. However, we had never seen a stage version until the itinerant group that calls themselves Paradise Theatre opened it this weekend. It’s a good show, and a somewhat appropriate show for the setting and this time in Paradise Theatre’s life and times. More on that in a minute.

One of Paradise Theatre’s strong suits is their use of young actors and actresses in putting on their shows. The youngsters in Paradise’ stable of talent have opened eyes as to their current skill and future potential. We were very impressed with Emily Williams in the titular role in “The Diary of Anne Frank.” (Miss Williams is excellent in this show, too.) Dante True was award-nominated for Snoopy in “You’re a Good Man, Charlie Brown.” Jaqui Westeren is in many Paradise shows and is excellent every time out. “Charlotte’s Web” gives Director Jeff Richards another chance to show off his young performers, and his skill in handling them is evident. To wit:

Anna Lineberry as Wilbur the Pig. Name a pig who emotes. Arnold Ziffel on Green Acres? Not really, since camera tricks were his stock-in-trade. Give up? We propose for your consideration, Miss Lineberry as the gold standard for fine swine stage presence. Her Wilbur shivers with anticipation, faints from shock and awe, and even flirts in a profoundly porcine way. This is Anna’s first time on the Mainstage, but it will not be her last as her bio indicates a multi-talented young lady whose star will ascend rather quickly.

Sophia Sinausky as Sophia: Miss Sinausky’s arrived on the Mainland from the Big Island last year is all to the good for the Mainland, in general. It’s good for Paradise Theatre, in particular, whose talents for development of young actors is well-known. Her Sophia is a nuanced performance in a cast where a lot of the action is over-the-top. Miss Sinausky has a future on this stage, and perhaps other stages, as well.

Chase Nelson’s program bio says he’s “excited.” That’s all you need to know. His performance in the role of “Avery” never knows a moment that’s anything but “crank it up to 11 and tear the knob off!” Hey, who among us doesn’t want to love what we do, and at full volume? 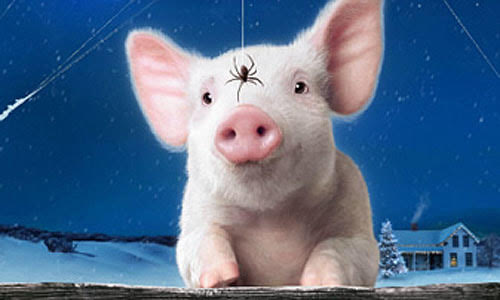 Other good performances were put on by all of the young people in the cast. Maile Olson, Ava Emory, Kelsea Gardner, the aforementioned Emily Williams and Andrew Scarvie (though Mr. Scarvie has a decade-ago history with Paradise). Every young person pulled their weight.

The adult roles in “Charlotte’s Web” are played by Paradise Theatre veterans, and it is obvious that they know each other’s movements. Troy Turnley (speaking of full volume) and Skip Bugenig have a great time playing Homer Zuckerman and Lurvey respectively. They are part of the pleasure that this show brings to bear.

Kudos to Courtney Turnley, who oozes charm as Charlotte herself. But, Ms. Turnley is a pro, and her ability to step in with just a few day’s notice speaks to her talent and willingness to make this show happen. She deserves every moment of the applause she receives, and more.

“Charlotte’s Web” is derived from the original material, of course, and hews fairly close to the source…except for some interesting dissonance/flatulence in Act Two. The butt in the joke is Eli Ghorley, one of Paradise Theatre’s strongest and most reliable performers. In this show, his Templeton the Rat is the broad humor, and Mr. Ghorley is great at that!

Now, Drama in the Hood is going to make an assumption. You clicked on this page because you love and support community theater. That’s great. We knew we liked the looks of you from the beginning. Paradise Theatre needs your support in the form of ticket buying, but it needs so much more than that. Paradise is a theater company worth saving, but it needs some angels interlocking wings and coming together with a big ole’ miracle. We referred to Paradise Theatre as “itinerant” at the beginning. That was on purpose, because they don’t have a home and, without a small matter of $550,000 they may not continue as a continuous member of the South Sound theater community. Talk about a shame.

So make plans to see “Charlotte’s Web,” but let’s see if we can’t fly a little higher than that. If you have a large slice of a half mil, and you’re looking for a chance to give back, here is your chance. If you have abilities as a fundraiser and would like to support our friends at Paradise, go for it. Your neighbors need your help, and this is your chance to leave an enduring legacy, so make it happen, friends. You will be so glad that you did.