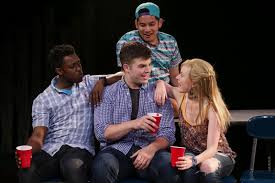 Book-it wraps up their current season with a knockout punch of a production: Welcome to Braggsville. Josh Aaseng and Daemond Arrindell adapted T. Geronimo Johnson’s award winning novel for the unique Book-it format, dramatically incorporating narrative sections and dialogue from the source text. For the first time in the troupe’s history, the authors strayed from a word for word rendition to transform some of the novel into found poetry pieces recited by actor Naa Akua. Because the novel has such powerful and complex thematic concerns, less art may have been more successful. Stellar acting from an immensely talented cast ultimately carries the day here.

The work focusses on D’aron Davenport (Zack Summers) a young Southerner meeting a bumpy road in adjusting to life as a Cal Berkeley student in the 21st century. Eventually he finds a home with a small renegade batch of fellow students. Justin Huertas steals many a scene as Louis, D’aron’s first roommate, a real fire cracker who has aims at being a stand-up comedian. Sylvie Davidson plays Candice, the one woman in the group. She provides a bit of a love interest for the boys, though her main passion is to take on all the country’s wrongs. Charlie, a quiet, thoughtful African American played by Dimitri Woods rounds out the group. His closing monologue, encapsulating a black man’s plight in modern America, is one of the more effective stage pieces I have seen in a good while.

The plot revolves around an ill-conceived plan by the young students to travel to D’aron’s hometown, Braggsville, to stage some performance art in protest of the town’s yearly Civil War reenactment. The premise seems absurd but Aaseng notes “T. Geronimo Johnson is simply pointing at the absurdity that we Americans have not dealt with our racism and white supremacy in any complete and meaningful way. With insufficient examples of how to confront and dismantle institutional racism, how could these four young people…have hatched a plan that was anything but absurd?”

The production runs into some problems attempting to cover the myriad of topics the novel handles. The play features some coming of age scenes for an awkward D’aaron, a heated conflict between D’aaron and his parents, a campus conflict concerning the treatment of American Indians, the overwhelming culture shock of Cal students meeting the American South head-on and several mysteries of what really occurred during the dark days the group spent in Braggsville. The FBI, a secret militia and some conflicted “good ‘ol boys” all have parts in the drama. Sometimes bulky novels make a hard fit for the concise dramatic arc required for a play. Book-it’s production of The Brothers K solved this problem by extending their production into two nights. Johnson’s novel certainly has enough material to warrant this approach.

The final scenes of the play do gather quite a bit of momentum as the young students argue whether their performance art concerned “faking a hate crime” or simply re-enacting American history. Eventually the group arrives at the sad conclusion that “You can’t save everyone.” What they also learn is live performance is a powerful and life altering tool. The work of this outstanding cast is viable proof for that lesson.

Book-its Welcome to Braggsville, directed by Josh Aaseng runs through July 2 at the Center Theatre at the Armory in the Seattle Center. For more ticket information call 206-216-0833 or go to www.book-it.org.